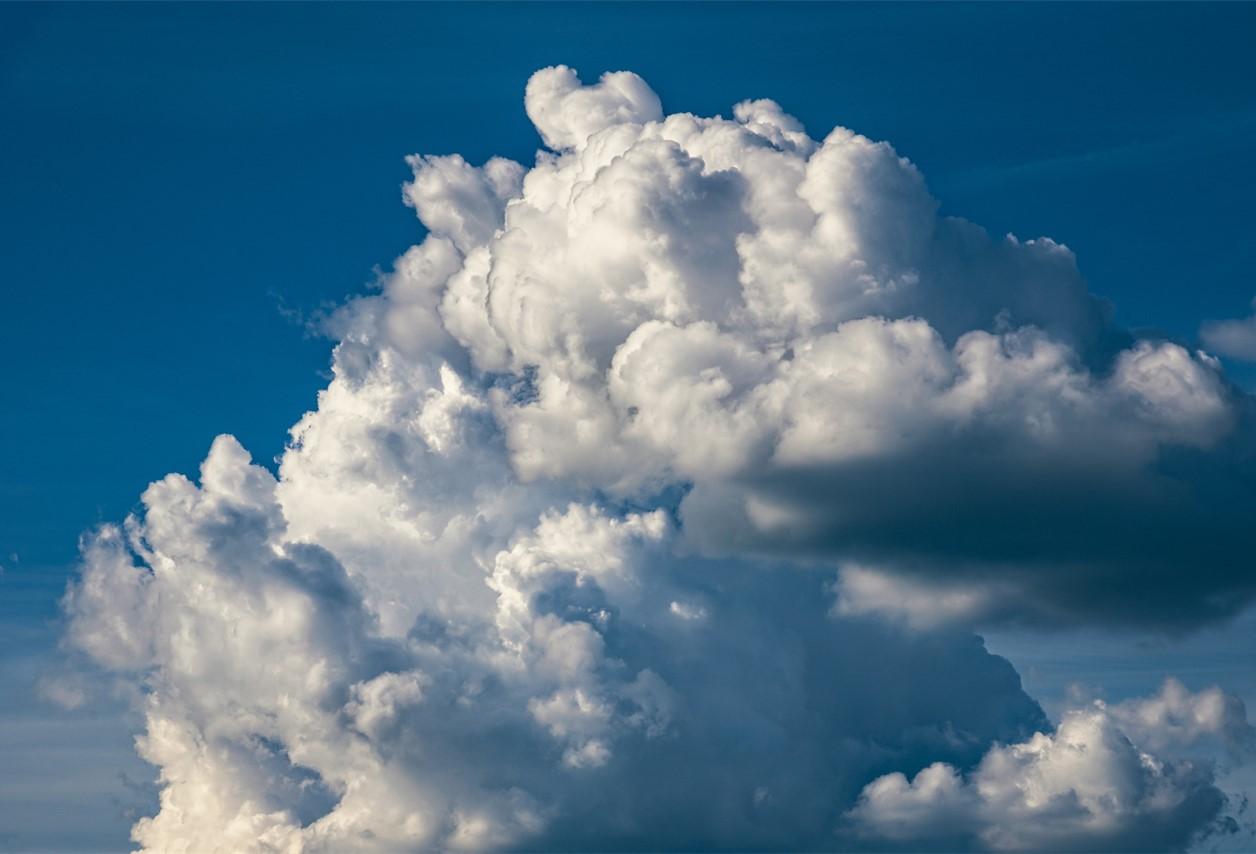 Most of the state is not under any type of official drought condition, except for most of Garrett and Allegany County. Temperatures are predicted to be higher for all of the state for the month of August, with slight chances of above normal precipitation.

The majority of the state is not under any type of drought; however, most of Garret and far western Allegany are considered abnormally dry. The probability for above normal temperatures for July are 40-50% for most of the state, with 33-50% probability of above normal precipitation.

Drought conditions have been alleviated in Maryland, with only 6% of the state being abnormally dry, most of which is in St. Mary’s county. The probability for above normal temperatures for June is 33-50%. There is equal probability of above, below, and normal precipitation for June.

As of April 26, 2022, 39.1 % of the state is classified as abnormally dry and 2.8% is under moderate drought. The probability for above normal temperatures for May are 33-40% for most of the state. The entire state has equal chances of above, below, and normal precipitation for the month of May.

Again this month, we've seen scattered rain across the region. However, we've had some good days for wheat and hay harvests. So far, I have not heard of issues with Fusarium head blight at harvest. Double crop beans are going in. No moths have been caught in the fall armyworm or western bean cutworm traps in western Montgomery County. Most of Frederick County is finished with small grain/wheat harvest, with about 70% of double crop acres planted and sprayed. Full season soybeans range from V3-R1, while corn ranges from V4-VT in some places. It appears that marestail got a late start this year outside of the burndown or post-spray window, as many corn and bean fields have 8-10" marestail. Japanese beetles appear to be the most prevalent pest of soybean, low pressure from other insects yet. With warm, wet weather in the near forecast, growers are advised to keep scouting for leaf diseases.—Kelly Nichols, Montgomery Co. and Mark Townsend, Frederick Co.

Only 2% of the state is considered abnormally dry, in the extreme southern regions of the Eastern Shore. The seasonal temperature outlook for November through January 2022 are leaning 40-50% chances of above normal temperatures and equal chances of above, below, and average precipitation.

In general, growing conditions have been great for much of the region, although slightly on the dry side on some of our drier soils; however, nothing dire just yet. A lot of hay was made a couple of weeks ago when we had near perfect weather. Barley harvest wrapped up about a week ago and a significant portion of the wheat crop has been harvested—showers this week has grinded harvest to a halt. I am hearing reports of great yields and great quality. Wheat straw market is still strong enough to make it worth baling instead of leaving it in the field to offset some potash prices. Corn is looking good and earliest planted is in tassel. Soybeans also look good. Overall, pest pressure this year has been low thus far.—Andy Kness, Harford Co.

Soil moisture has been on the edge of dry, up until a few days ago. Most of the crops are good, but have only been a couple days from drought before another thunderstorm. In the last few days, the region has received numerous storms dropping inches of rain. Corn is tasseling with good soil moisture. The crop is uniform with excellent yield potential and expectations. Soybeans are also off to a great start with group 3’s beginning blooming. Wheat yield was above average and double crop beans are also off to a good start. Good hay was made between thunderstorms at the end of May.—Jim Lewis, Caroline Co.

As of September 30, 2021, no parts of Maryland are categorized in any type of drought or dry condition. The majority of the state has between a 33-50% chance of above-normal temperatures in October and 33-40% changes of below-normal precipitation. 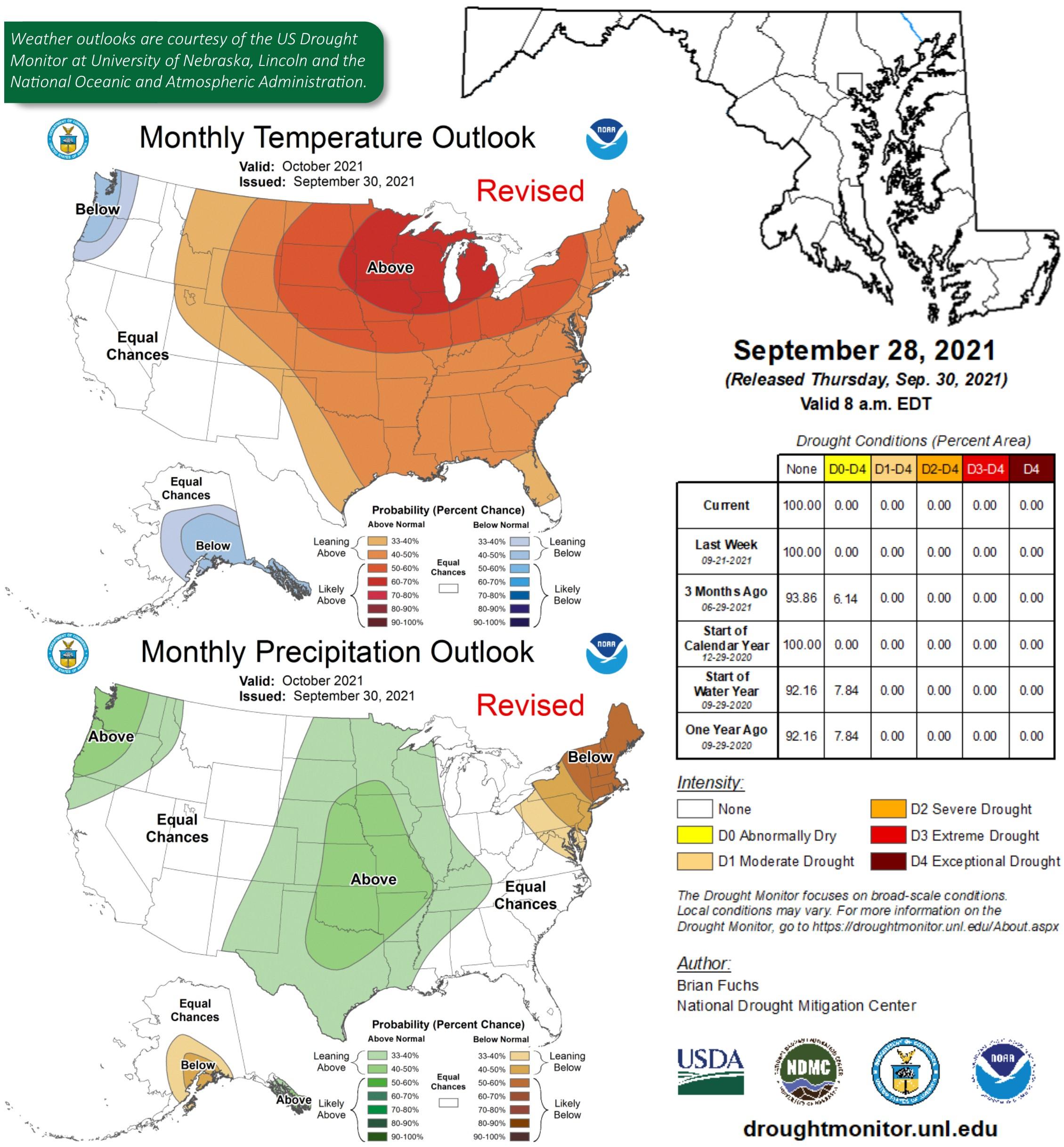 Most of the state is not considered to be under any drought condition, except for portions are far western Allegany county and all of Garrett. There are equal chances for above, normal, and below-normal temperatures for September. The majority of the state falls between a 70-80% probability of above-average rainfall for the month of September. 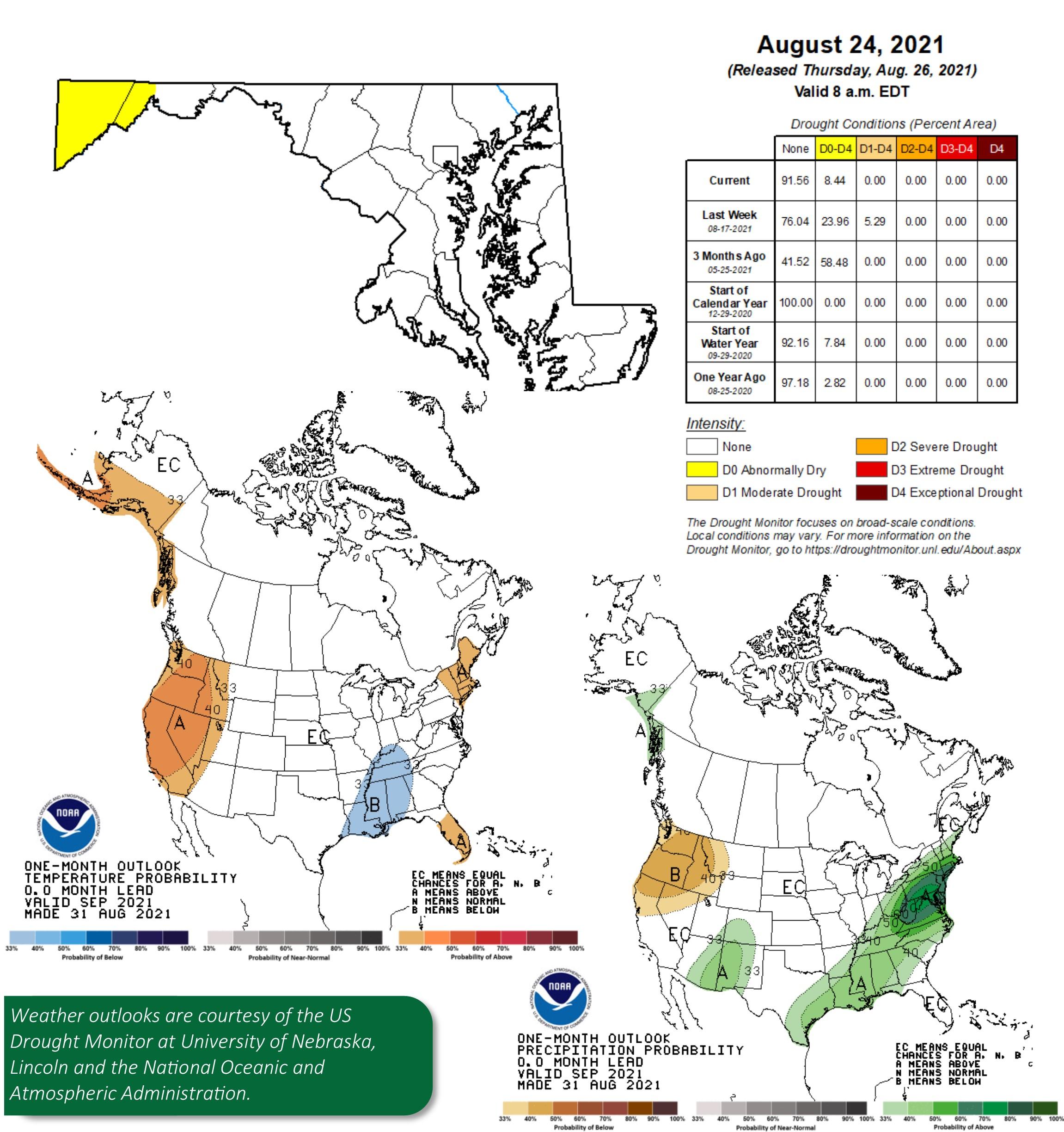 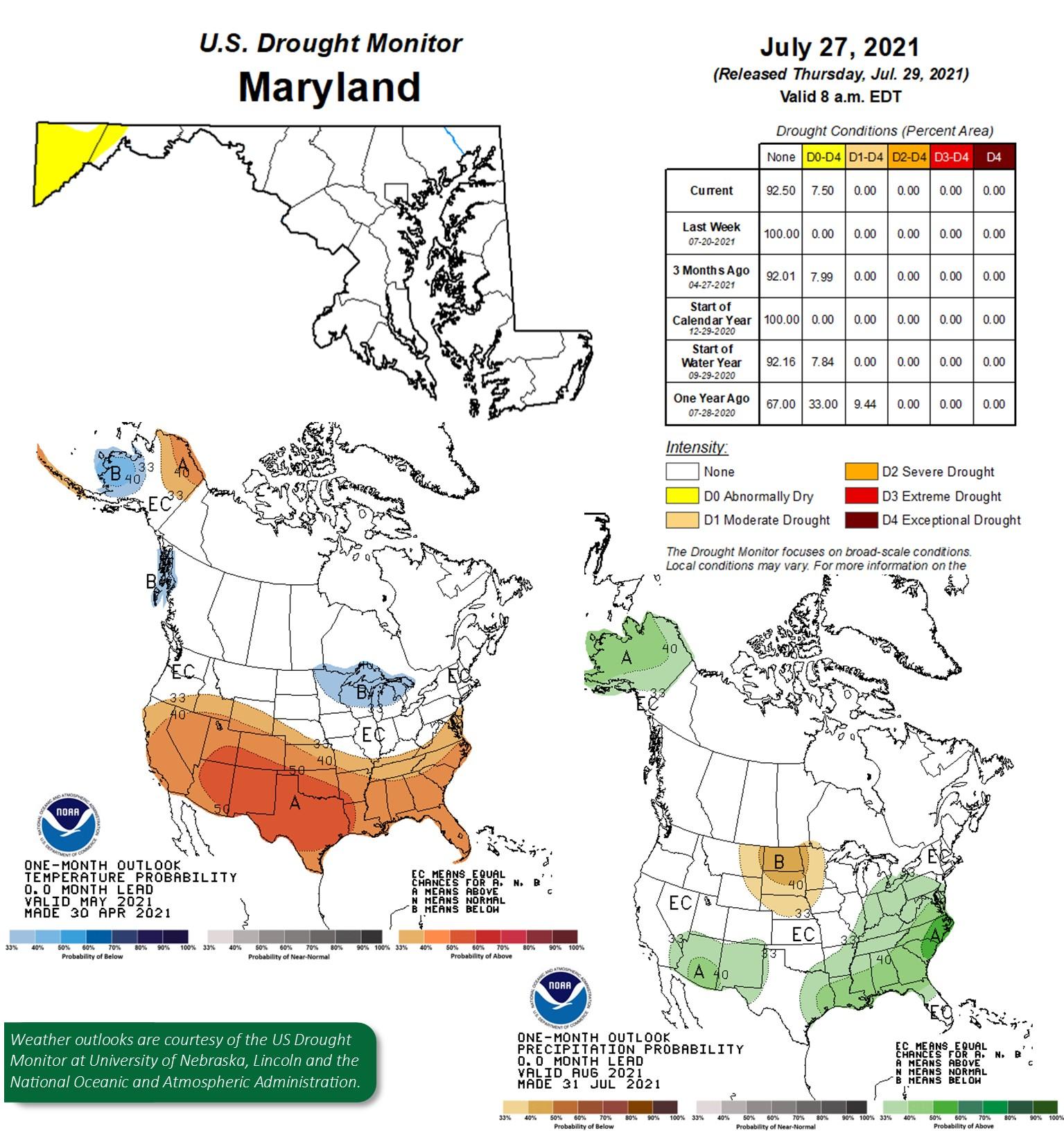 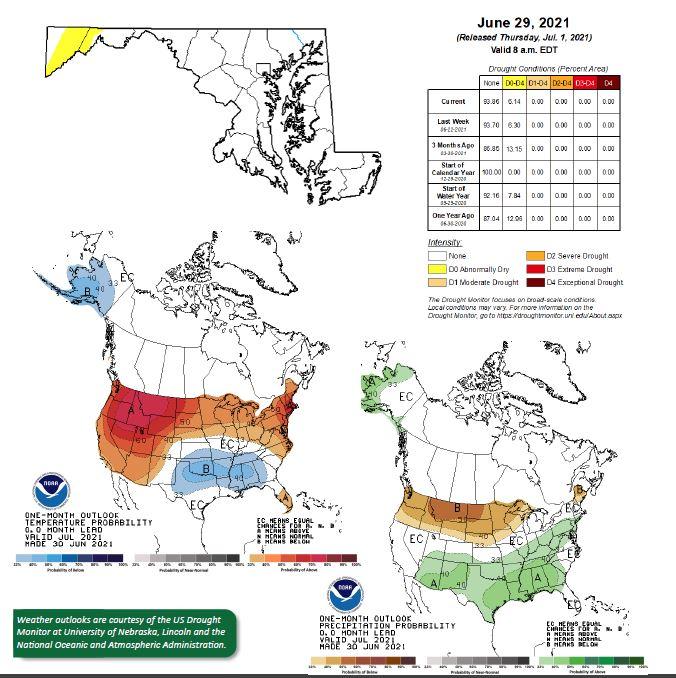 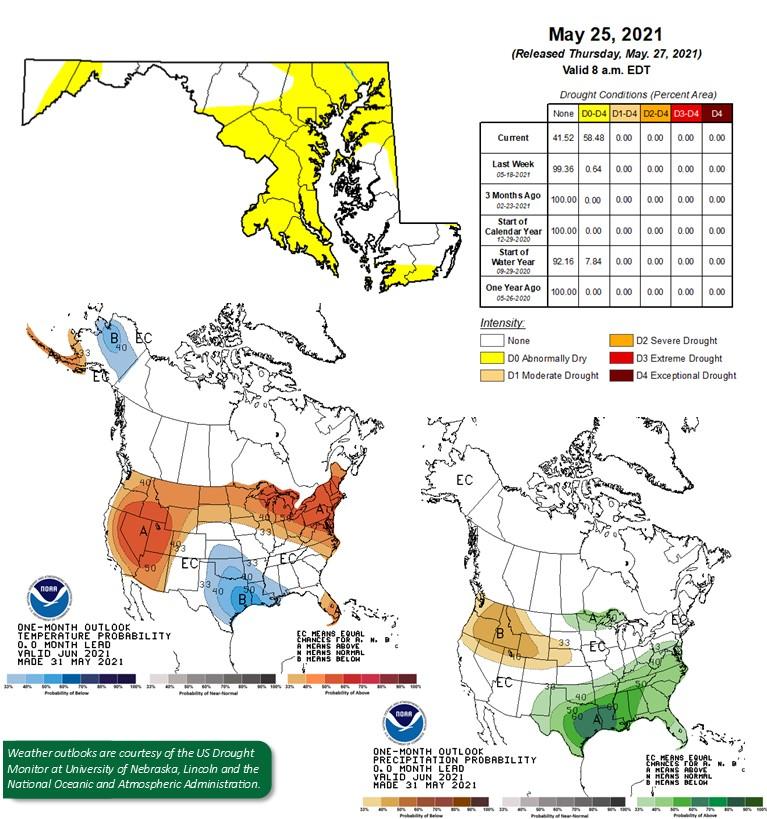 Nearly all of Garret and portions of Allegany county are classified as abnormally dry; the rest of the state is not under drought conditions. In the northern and western parts of the state, there are equal chances of above, normal, and below-normal temperatures for the month of May, while the southern and eastern shore have between a 33-40% chance of above-normal temperatures. Most of the state has between 33-40% chances of above-average precipitation for the month of May. 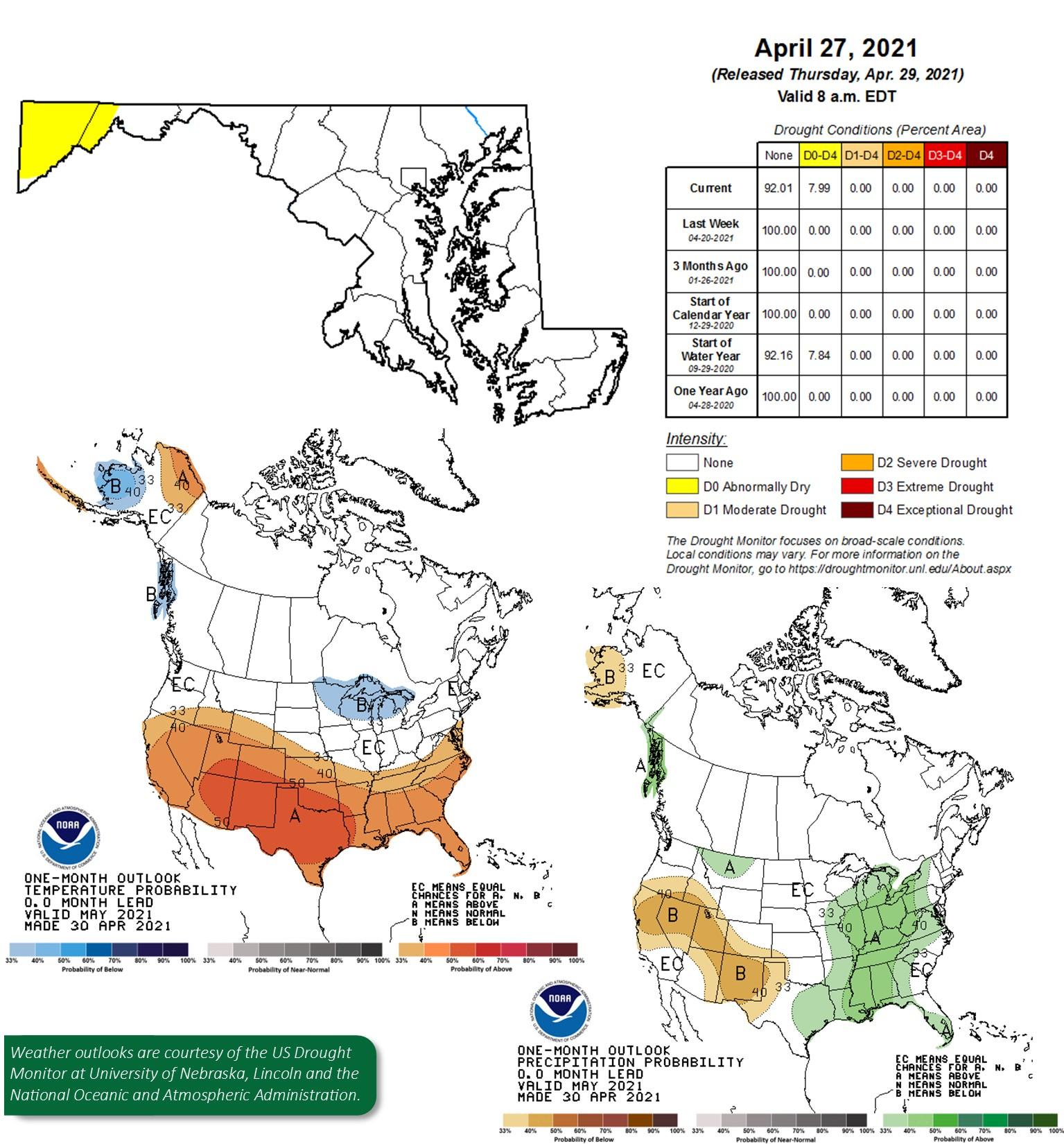 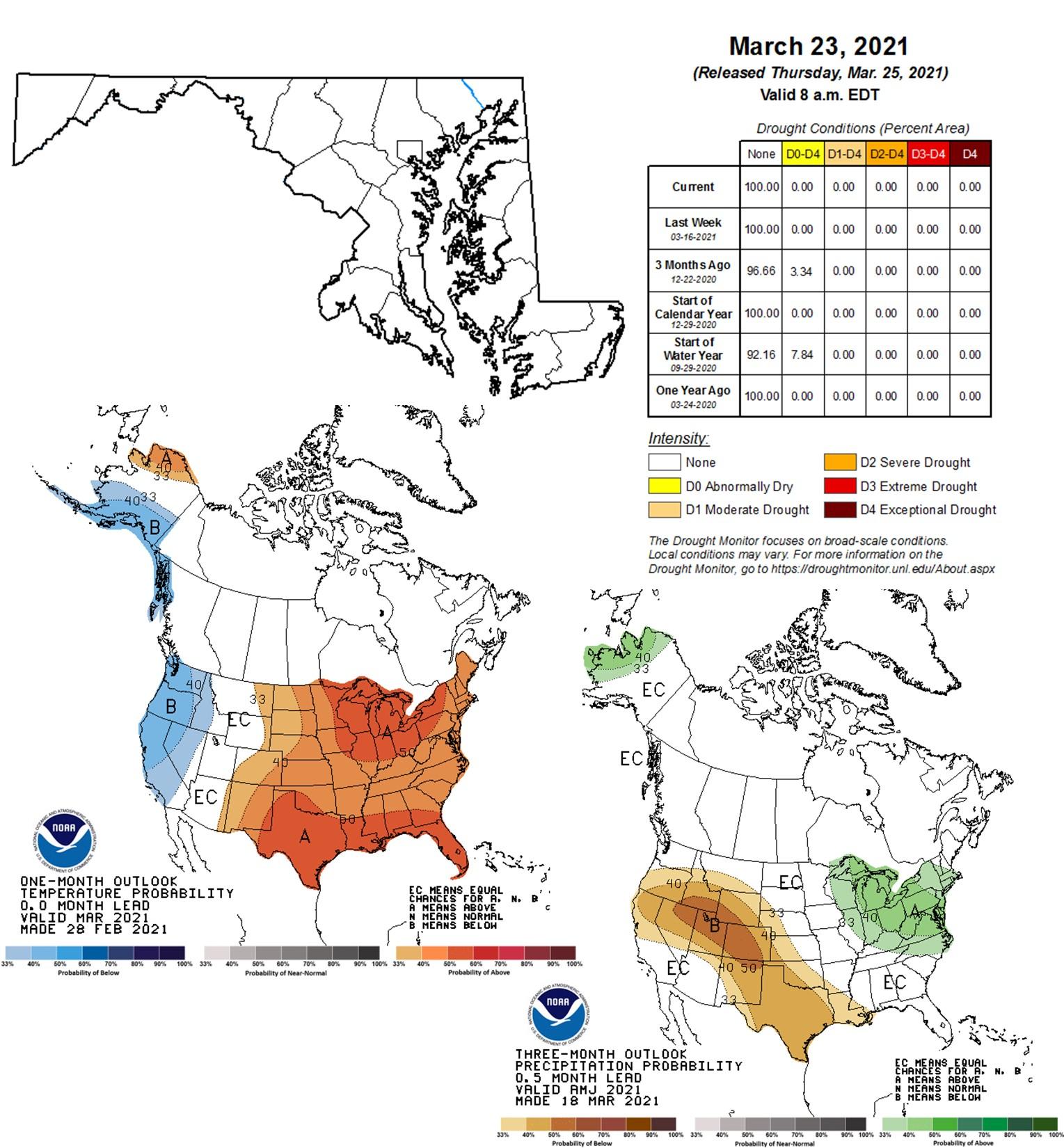