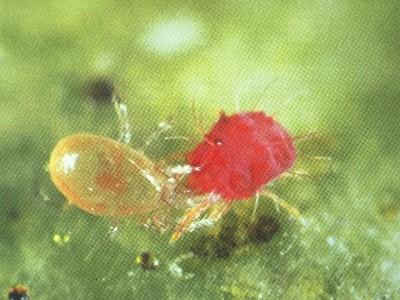 Life stage(s) that feed on pests: Larvae, nymphs, and adults.

Insect(s) fed on: Predatory mites feed primarily on all life stages (eggs, nymphs, and adults) of a wide array of spider mites, as well as other plant-feeding mites such as rust mites and bulb mites. They also feed on the eggs and immature stages, such as crawlers and nymphs, of insects like thrips, whiteflies, and scale insects. The adults of some species feed on pollen, honeydew, fungi, and leaf sap.

Larvae/Nymphs: Larvae are tiny, oval, translucent shiny white to tan, with six legs; wingless. Nymphs look the same, but have 8 legs and are slightly larger than larvae, although smaller than adults.

Where to find: Eggs are laid on plants with spider mite infestations, on the leaf underside along the midrib. All stages are usually found on the leaf underside amid their spider mite prey. Adults look like moving specks and are more active than pest mites. To figure out which you have, gently blow on or touch them; if they quickly move away, they are more likely to be predatory mites.

How to attract and conserve: Avoid or reduce use of broad-spectrum insecticides, and use the least toxic materials for mite control. Horticultural oil can be applied pre-bloom to suppress pest mites early in the season with little impact on phytoseiid mites still in their protected overwintering sites. Establish naturalized areas bordering the garden to serve as a reservoir for predaceous mites that will colonize garden plants later. Predatory mites will disperse when they have eaten all available prey, so they must be reintroduced if spider mites reappear.