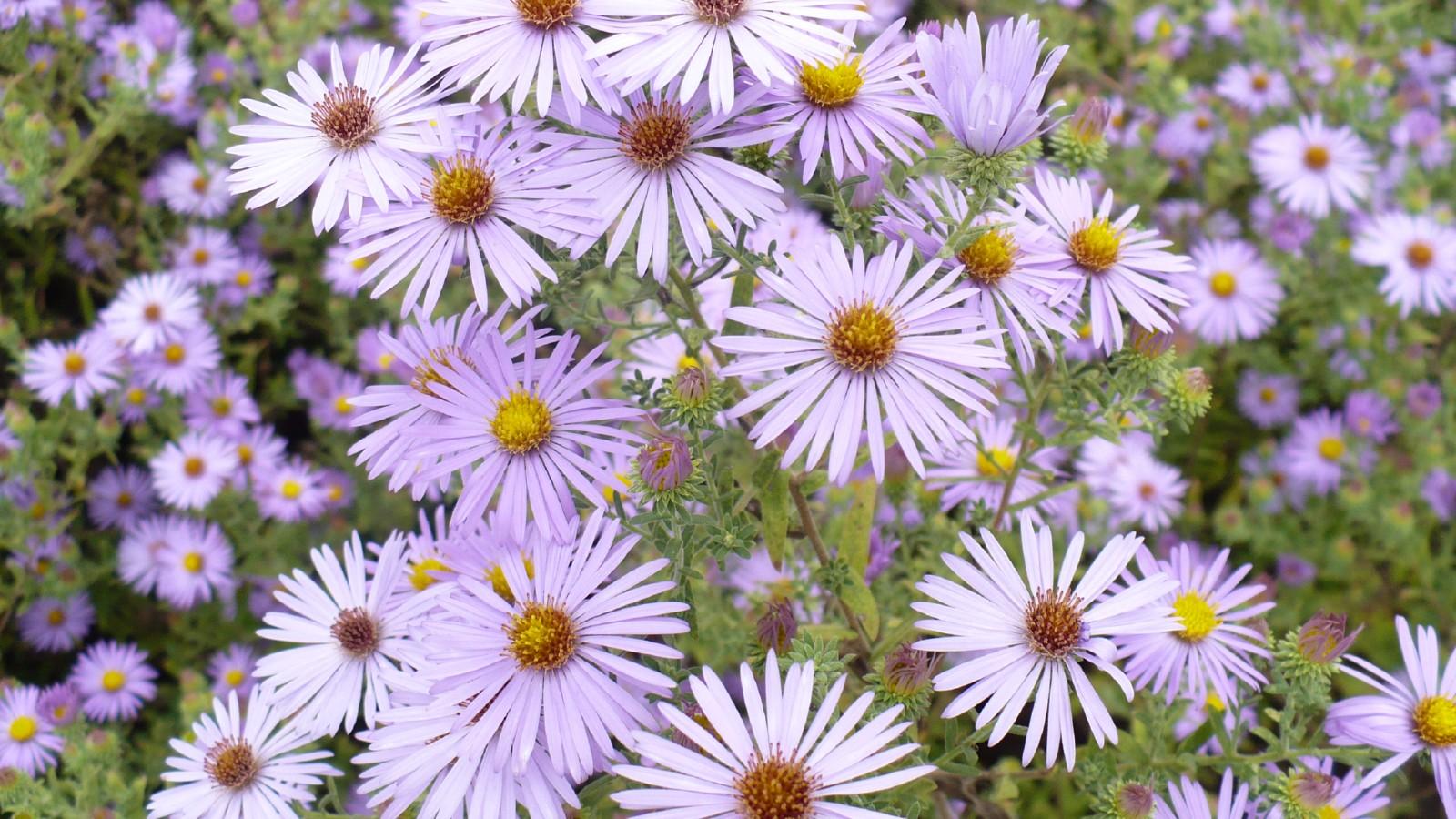 The most obvious advantage to growing perennials is that they do not have to be set out each year, although some must be replaced or divided every few years. Another advantage is that, with careful planning, a perennial flower bed will change colors as one type of plant finishes and another variety begins to bloom. Deadheading is not always necessary to keep them blooming, since perennials have a limited blooming period. However, they do require pruning and maintenance to keep them attractive.

Their relatively short bloom period is a disadvantage to the long-season gardener, but combining them and using annuals will give a continuous show.

With some perennials the removal of spent blossoms encourages the production of additional blooms in the current season. When plants have old leggy foliage and lush new growth at the base, the old foliage should be removed to allow newer leaves and stems to develop. Biennials or short-lived perennials can sometimes be tricked into another year of flowering if seed heads are removed immediately after flowering.

It is very common for container grown plants to become root bound while growing in the plant nursery and as they wait to be sold. Take the time to prune the roots before planting. This looks drastic but in the long term, the plants will develop healthier root systems that spread out laterally into the soil.

Deadheading is the removal of spent flowers. Flowers that go to seed consume large amounts of a plant’s energy, diverting it from vegetative growth. When practical, plants can be deadheaded to a lateral leaf, flower or bud. In the case of a single flower stem nearly bare of leaves, the stem should be cut off close to the base after flowering.

Disbudding is the removal of small, young flower buds. Removal of the top or terminal bud causes the plant to produce more, but smaller, flowers. Removal of the side or lateral buds will produce a larger flower on a longer stem. Dahlias, carnations, chrysanthemums, and peonies are commonly disbudded.

Pinching is removing the top few inches of soft growth with either a sharp, clean pair of shears or by pinching it off between your thumbnail and index finger.

In general, perennials should be deadheaded after blooming unless: self-seeding is desired, the seed heads are attractive, or the seeds are a food source for wildlife. Many people allow foxglove, digitalis, columbine, corydalis and other desirable perennials to go to seed to generate new plants. The seeds of coneflower, Joe-pye weed, sunflower, bee balm, hosta, and black-eyed Susan are considered both attractive in winter and a good food source for birds.

Some perennials are thinned to reduce the risk of disease, increase flower size, or improve appearance. Thin by cutting some stems at the base of the plant. This improves air circulation around the plant, thereby reducing the risk of disease. Phlox, asters, monarda, and delphinium benefit from being thinned because they are prone to mildew or rot.

Pinching promotes bushy growth. To avoid staking and to produce more compact plants with stronger stems, pinch back perennials such as chrysanthemums and asters several times before mid-July. Generally the first pinching is done as soon as there are several sets of leaves on each stem. Pinching delays flowering. The trick of pinching only some of the stems extends the blooming season, since the pinched portions will bloom later. To stagger plant heights or bloom times, perennials such as Phlox paniculata and Autumn Joy sedum can be pruned once or twice in the summer before mid-July. Perennials with one leafy stalk, such as a lily, and those with leafless flowering stalks, such as iris, should not be pinched back before bloom.

Sometimes flowers are removed because they are not considered as attractive as the leaves: some hostas are an example. In the fall, cutting plants to the ground tidies up the garden and removes debris that might harbor insects or disease. However, it can also remove the winter weather protection that broken, bent stalks provide to tender basal foliage.

Perennials and ornamental grasses that are not cut back in the fall provide protection and seeds for birds in the cold weather. It also provides overwintering sites for pollinators and natural enemies that work in our favor to control pests. It is a personal preference whether to leave the plant debris or cut it back.

If you need to transplant a perennial plant, do it on a cloudy day to reduce sun and/or heat stress. If you are careful, perennials can be transplanted even when they are in bloom; but it’s best to do it when they are dormant or just starting growth. Early spring or fall are the best times to transplant them.

In the fall, stems and seed heads of flowering herbaceous perennials and ornamental grasses can be left standing to provide food for birds (seeds) and overwintering habitat for pollinators and other wildlife that are in peril largely due to habitat loss. There are a couple of exceptions to this:

If plants are healthy and not pruned back in the fall, prune them in early spring before bees start flying and seeking nesting sites (insect activity starts when the daytime temperature is consistently above 50F). Stems can be cut to various heights from 8”-24” above the ground. The hollow tubes of the stems provide nesting sites for some types of non-stinging native bees (pollinators). The top portions of pruned stems can be composted or put in a pile or bundle in an out-of-the-way area of your yard to create additional nesting and shelter spaces. (Refer to (PDF) Nesting and Overwintering Habitat for Pollinators and Other Beneficial Insects.)

Fall is a good time to transplant and separate perennials to give them more space. Increasing air movement between plants is another important method of preventing disease problems. If you are concerned about excessive bare space, plan to fill in with annuals for the first few years.

After frost arrives in the fall, you can apply a 1” layer of mulch around perennial plants. Do not pile wood mulch on top of the plant crowns, as this encourages rotting and root development into the mulch instead of the soil. Fallen leaves can be raked and shredded with a mower and placed around perennial plants. The leaves decompose and provide nutrients for your soil – free fertilizer!

Seed propagation has several advantages over vegetative division. Diseases are less likely to be carried over with seed. Less common varieties are more often available as seeds. Seeds of species plants will come true to type, whereas seed of cultivars may not come true. Plant perennials from seed either in mid-to-late summer, at the same time they would naturally germinate, or sow them in the spring.

Most perennials left in the same place for more than three years are likely to be overcrowded, with dead unsightly centers. The center of the clump will grow poorly, if at all, and the flowers will be sparse. The clump will have a “doughnut” appearance. The perennials need to be divided. In Maryland, divide spring and summer bloomers after they bloom, either in late summer or fall as the foliage dies down. Fall-blooming herbaceous perennials are usually divided in early spring, giving the plants an entire growing season to recover.

Select new growth for cuttings. Make tip cuttings three to six inches long. Treat the base of the cutting with a root stimulant. Leave all foliage on the cutting except the part that will be below the soil line. Insert one cutting in a pot filled with damp sand. Place pots of tip cuttings in a lightly shaded place. Cover with a sheet of tented clear plastic. Check regularly to make sure the cuttings do not dry out.

When cuttings do not pull easily out of the soil, they have begun to root. Make holes in the plastic sheet or raise the plastic cover to increase air circulation. This will harden the cuttings. Make root cuttings of such plants as phlox, baby’s breath, and Oriental poppy. Dig the plants in spring. Select pencil-size roots; cut them into 4-inch sections. Put each piece in a peat pot. Prepare a tray of pots as for seeds, except the soil mix should be two parts sand, one part soil, and one part peat moss. Water thoroughly.

A selection of perennials for a succession of bloom