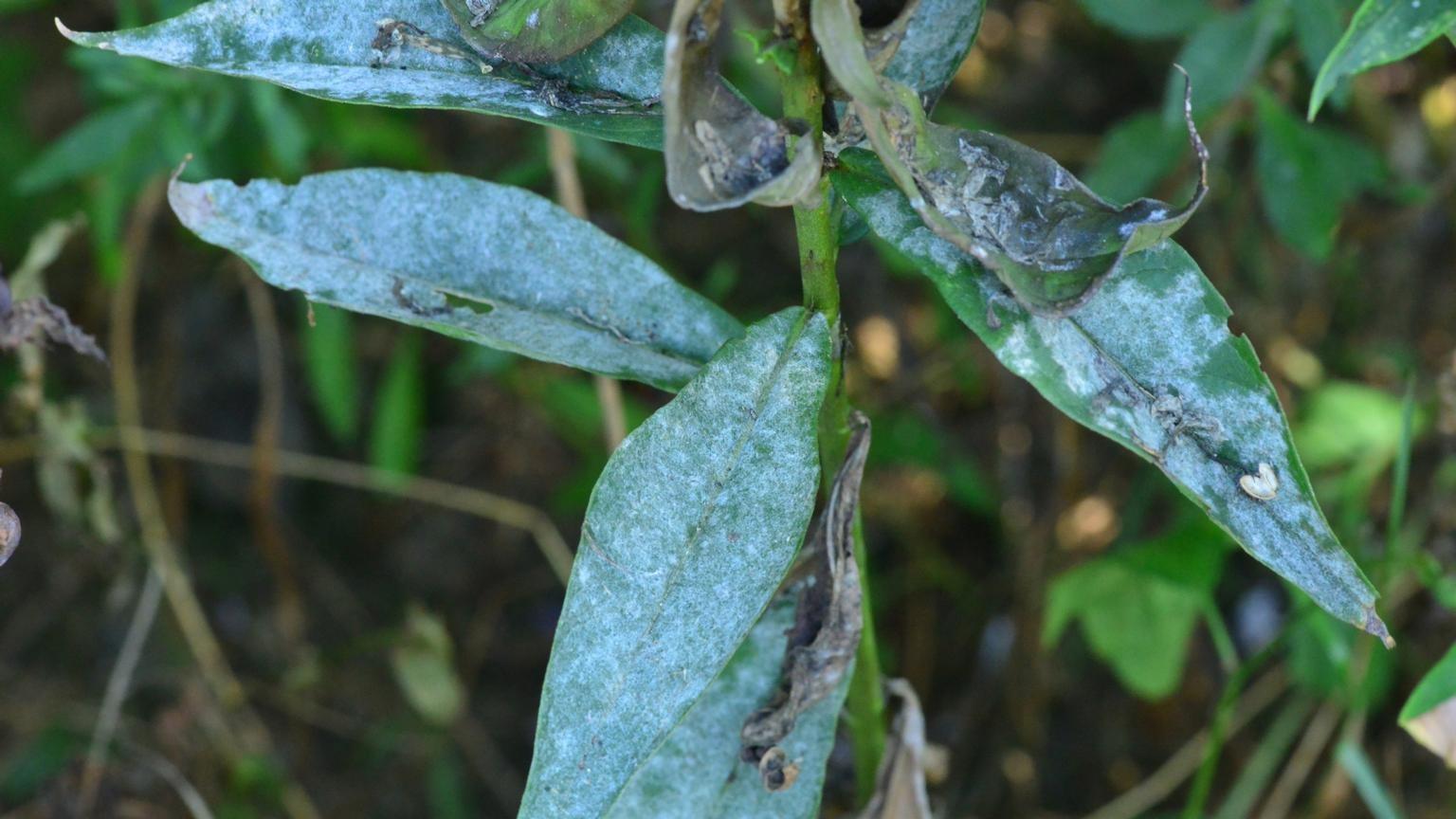 Fungal leaf spots are common on many herbaceous flowering plants, however some are more devastating than others. Experience and regular monitoring will alert gardeners as to the seriousness of the problem. Foliar diseases are frequently weather dependent and vary in seriousness from season to season according to rainfall and temperature. In some cases leaf spots will not spread or cause much damage, but in other cases management actions should be taken promptly because the disease will continue to spread, perhaps defoliating the plant. Have the disease identified to determine the necessary treatment.

Early symptoms are usually noticed as light green or yellow angular patches on the upper leaf surfaces. Under high humidity, downy mildews form fluffy or fuzzy (downy) areas of spores only on the lower leaf surfaces. If viewed through a hand lens, these downy areas look like very small bunches of branched hairs. Older leaves near the bottom of the plant are usually infected first and wither and turn brown as the disease proceeds up the stem. Some species can be seed borne and others may cause systemic infections. Some weed species serve as reservoirs of inoculum. Perennials commonly troubled by downy mildews include artemisia, aster, centaurea, coreopsis, geum, lupinus, potentilla, rudbeckia, veronica, and viola.

Powdery mildews grow as a white powdery coating over the surfaces of leaves, buds, twigs and stems. Another characteristic of powdery mildews is that they produce their sexual spores within a round dark colored structure called a cleistothecium. These structures observed under a hand lens appear as very small dark spheres with attached appendages. These fungi can over winter as spores on fallen leaves or in buds. Spores are carried to the leaves by air currents. The first symptom of infection usually occurs as a superficial white coating of mycelium on older leaves. Disease spread occurs as spores are released from the surface layer of mycelium. Perennials commonly troubled by powdery mildews include aster, centaurea, coreopsis, lathyrus, liatris, monarda, phlox, zinnia, and rudbeckia.

Symptoms of infection usually appear as light colored spots on the upper leaf surface followed by rusty colored areas of spores either on the upper or lower leaf surfaces (goldenrod and geranium). Rubbing these areas with a finger or onto a piece of paper will leave a rusty colored smudge. Rust diseases can be quite complex and may alternate between hosts in different genera or remain on the same host during their life cycle. Alternate hosts may include weed species. Perennials commonly attacked by rust fungi include aster, campanula, dianthus, iris, and malva.

Anthracnose diseases are caused by various fungi that produce their spores within a fungal fruiting body, called an acervulus. The acervuli are often visible as small dark dots within the necrotic leaf or stem lesions and the spores are often released in slimy mass. Some acervuli, especially in the genus Colletotrichum, have small visible setae or hair like projections that are visible through a hand lens. Anthracnose symptoms typically appear as dark colored spots or sunken lesions that can quickly run together under ideal environmental conditions to form irregular dark lesions that cause rapid blighting of leaves or stems. This blighting can result in severe plant losses if not diagnosed in the early stages of infection. Under wet conditions these diseases can have multiple infection cycles during the growing season. Perennials commonly infected by anthracnose diseases include Acorus, Belamcanda, Bergenia, Convallaria, Dianthus, Epimedium, Heuchera, Hosta, Liatris, Liriope, Luzula, Malva, Phlox, Polygonatum, Rudbeckia, Saponaria, Sedum, and Tiarella.

Regular scouting and plant inspection, especially on lower and inner leaves, will alert growers to foliar problems. Samples should be taken and symptoms noted for follow up inspections and evaluation of the disease progress. Have the disease identified so that management decisions are based on the appropriate life cycle.

Most foliar diseases can be lessened with proper watering and humidity regulation. Water as early in the day as practical, to allow foliage to dry before nightfall. Alleviate poor air circulation, crowded conditions, or standing water to help lessen humidity levels. Inspect new foliage and older foliage regularly for signs of infection to catch infections early. Sometimes simply removing the infected spotted leaves or plants will solve the problem. Selection of resistant varieties will also help to eliminate the application of costly controls.