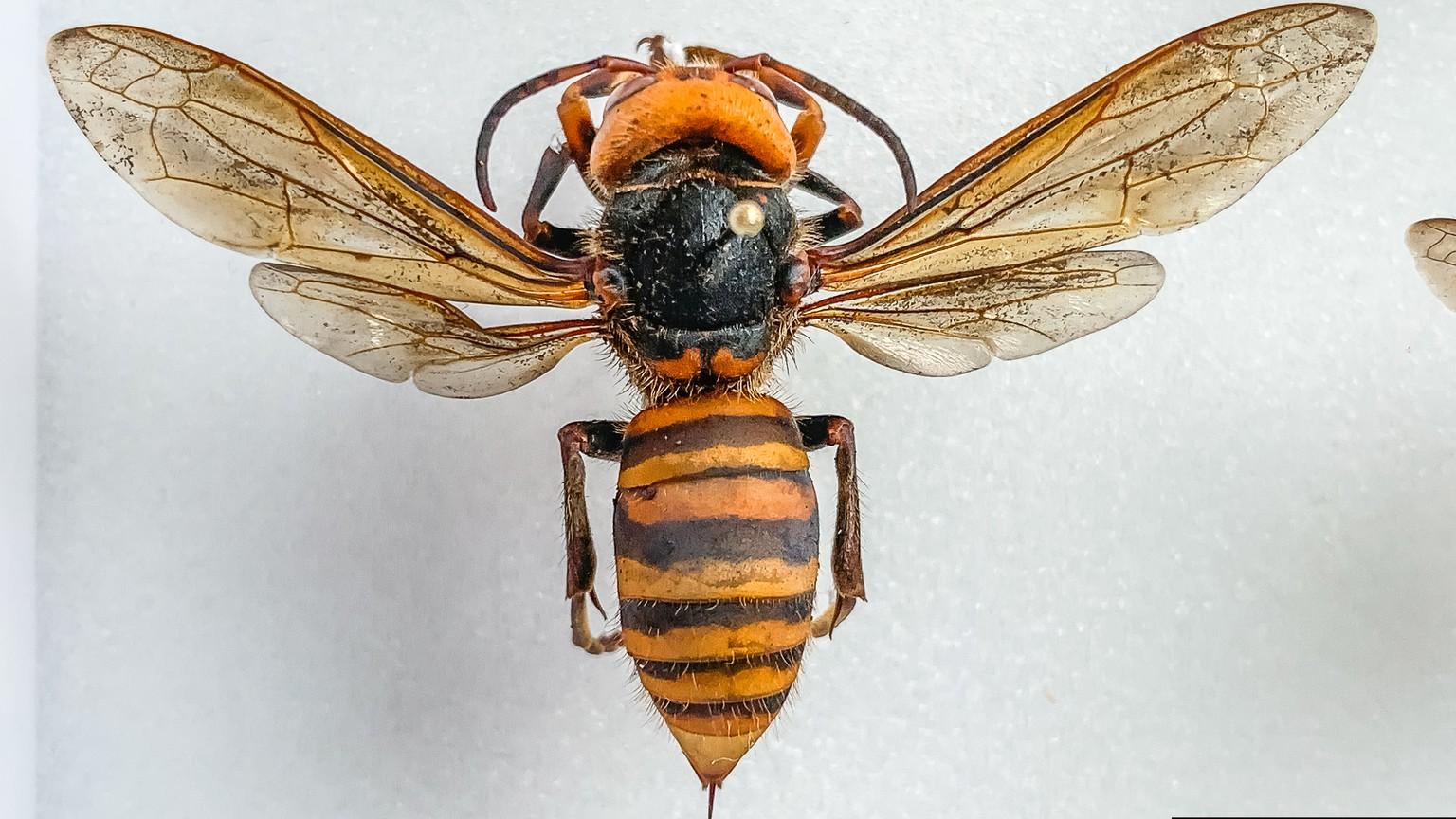 The northern giant hornet (Vespa mandarinia) has not been found in the Mid-Atlantic region; however, there are many other species of large wasps that are found in this area.

The northern giant hornet is the largest hornet species in the world. It is native to Asia but was found in British Columbia, Canada, and Washington State in the fall and winter of 2019. Washington has set up a baited trap system for surveying populations of this pest. The northern giant hornet builds its nest underground, which makes locating and removing the nest a challenge.

Update October 2020 - Washington State Agriculture Department workers located a northern giant hornet nest in a town near the Canadian border. It has since been eradicated.

The northern giant hornet is the largest hornet species in the world. The queens, which are only found outside the nest in the spring, are about ~ 2.25 inches (5.5 cm) in length. Workers are about 1.5 inches (3.5 cm) in length and can be found foraging outside the nest spring through fall. In the Mid-Atlantic region, there are other species of wasps that are similar in size and may be confused with the northern giant hornet. 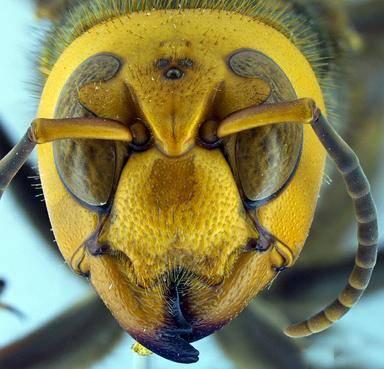 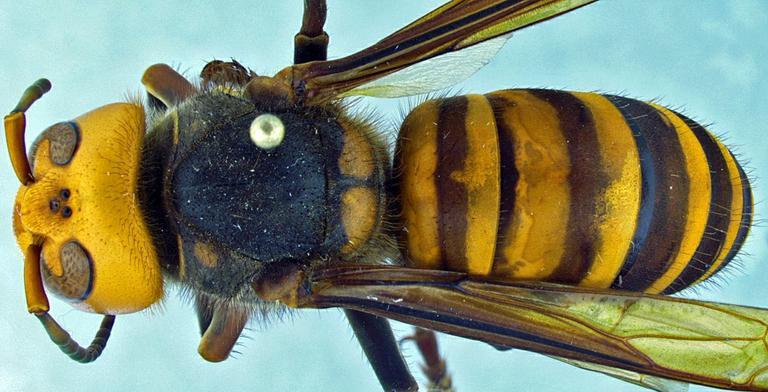 The northern giant hornet has an all-yellow head, a black thorax, and stripes of yellow and dark brown-black on its abdomen. It will not be hairy-looking, and the bands on its abdomen will not have droplets or triangle shapes on them.

See the look-a-like section below for common wasps and bees that are found in the area that may be mistaken for the northern giant hornet.

Northern giant hornet are social wasps that build a new nest yearly underground in abandoned rodent burrows or sometimes in dead, hollow trunks or the roots of trees. Nests can house over 300 insects.

Similar to other social bees and wasps, the northern giant hornet colonies are made up of one queen and non-reproductive female workers. In the springtime, queens will emerge from overwintering to feed and search for a suitable nesting site. She will build a nest, forage, lay eggs, and care for the young.

Once about 40 workers have reached adulthood, they take over foraging and caring for the colony, while the queen remains in the nest and lays eggs. At the end of summer, the queen will produce reproductive males and next year's queen.

In the fall the males will leave the nest and wait outside the nest entrance for the new queen to emerge. When she emerges, males will ambush and mate with her. After mating, she will look for a place to overwinter until next spring.

Northern giant hornets, like other wasps, are predatory and primarily feed on other arthropods such as large caterpillars, beetles, and spiders. They usually hunt alone, but later in the season when the nest is large and reproductive stages are present, they may attack other social wasp nests, including honey bee hives.

These attacks will start with a few hornets weekly killing guard and scout bees at various different hives. The northern giant hornets will wait outside the hive, catch one bee, decapitate it, remove its abdomen and legs, and then take the muscle-rich thorax back to the nest. This pattern can continue all season and never progresses to the point where the hornets wipe out the hive.

However, northern giant hornets can also target one particular hive and enter into a "slaughter" phase. It is unknown what causes northern giant hornets to shift from minor attacks to slaughtering a hive. In this case, up to 50 hornets will wait near the entrance of the hive and will bite to death each bee that approaches them. Unlike before, they will not take any part of these bees back to their hive but will drop it and wait for the next one. Once the hive is defeated, the hornets will enter it and take the protein-rich parts of the bee pupae and larvae back to their nest. Honey is rarely taken back to the hive. The hornets will guard the hive from other hornets, people, and animals while taking resources back to their nest.

The northern giant hornets, like other social wasps, will not seek people just to sting them. They will sting when defending their nest or a food source. Their sting is described as being extremely painful, due to its size and the volume of venom delivered per sting. However, it is not clear if they are more likely to cause death or induce an allergic reaction than honey bees, yellowjackets, and other social wasps.

If you think you have found or seen a northern giant hornet, please send a photo to your local extension office or submit it to the Home and Garden Information Center's Ask Extension service.

European hornets (Vespa crabro) was the only true hornet found in the United States before the northern giant hornet was found in 2019. It can be found in the eastern United States from the northeastern states west to the Dakotas, and south to Louisiana and Florida. It often comes in contact with people when they build nests inside the walls of buildings though they are also commonly seen chewing or girdling twigs and branches of trees and shrubs, or feeding on fallen fruit.

Unlike the northern giant hornet, which builds nests underground, the European hornet will build its nest in concealed places like hollow trees, barns, outbuildings, hollow walls of houses, attics, and abandoned beehives.

The European hornet is very similar to northern giant hornets in size and coloration. Here are some ways to tell them apart.

The European hornet (left) will generally have a light-colored face that will be darker on the back of the head. The northern giant hornet head (right) will be the same yellow color all around.

The European hornet (left) abdomen is yellow with dark triangular shapes on the segments closest to the thorax, followed by rows of dark teardrops near the end. The northern giant hornet (right) abdomen is similar in coloration but has alternating straight dark and light bands.

Bald-faced hornet (Dolichovespula maculata), also known as the white-faced hornet, white-tailed hornet, spruce wasp, blackjacket, and bull wasp, is a species of yellowjacket wasp. They can be found throughout the United States and southern Canada, but are most common in the southeastern United States. They create egg-shaped aerial paper nests usually on the limbs of trees, but nests also can be found beneath overhangs of buildings.

Here are some ways to tell the bald-faced hornet apart from northern giant hornet. 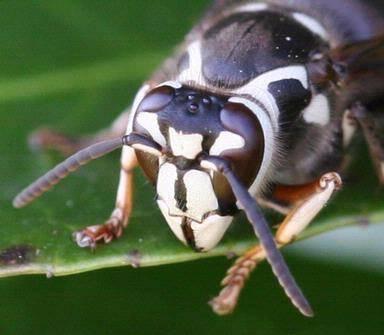 The bald-faced hornet's abdomen will be all black at the top with black paint drops pattern on the last 3-4 segments. The northern giant hornet abdomen has alternating straight dark and yellow bands along the entire abdomen. 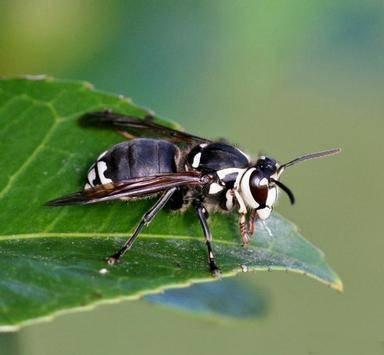 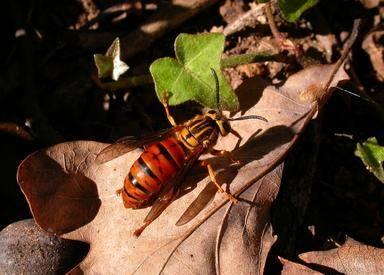 The southern yellowjacket queen (above) is the closest in size to the northern giant hornet. One way to tell the difference between them is that she will have longitudinal stripes on the first segment of her thorax (also known as the prothorax).

Eastern cicada killer wasp (Sphecius speciosus) is native solitary species of wasp, which build its nests in the ground. While their size can be alarming to some, they are not aggressive and do not engage in nest-guarding. They are beneficial wasps that help reduce cicada populations.

Females are similar in size to the northern giant hornets at about 2 inches long. They can be distinguished from northern giant hornets based on coloration. The Eastern cicada killer's head will be reddish-brown in color, and their eyes will not be notched. Their abdomen will have light color markings near the top, but the segments at the end will be all black. 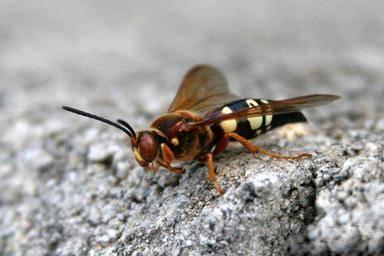 If you think have found or seen a northern giant hornet please send a photo to your local extension office or submit it to the Home and Garden Information Center's Ask Extension service.