Frost Can Cause Hazards in Forage 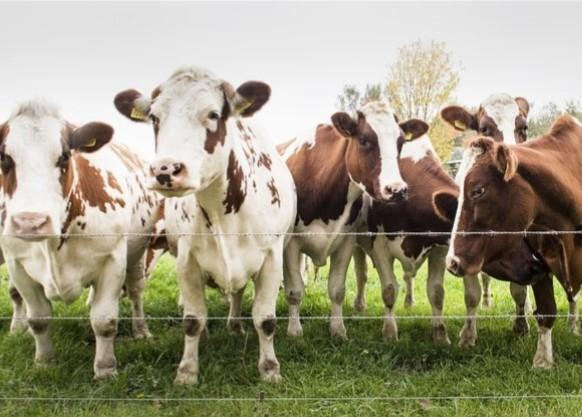 Frost Can Cause Hazards in Forage

With the first freeze of the fall just around the corner, remember that a frost can result in potential hazards for certain forages. When a plant freezes, changes occur in its metabolism and composition that can cause toxicity issues for livestock. A few issues to be on the lookout for are discussed below.

Sorghum species like sorghum, sudangrass, sorghum-sudangrass hybrids, and johnsongrass contain a cyanogenic compound called dhurrin within the plant. Under normal circumstances, the dhurrin is bound within plant tissues and remains non-toxic. However, if the plant tissue is injured by some sort of stressor such as a frost, the plant cell membranes can become damaged. This damage releases enzymes that can break down the dhurrin, resulting in the formation of a highly toxic hydrogen cyanide compound commonly referred to as prussic acid.

Prussic acid hinders the animal’s ability to transfer oxygen in the blood stream, resulting in asphyxiation. Ruminant animals are most susceptible, with a prussic acid concentration as small as 0.1% of dry tissue considered dangerous. Symptoms of prussic acid poisoning can appear within minutes following ingestion, with common symptoms including excessive salivation, difficulty breathing, staggering, convulsions, and collapsing. The greatest levels of prussic acid can be found in the leafier parts of the plant, particularly in new growth, and young, growing plants contain more prussic acid than older plants. To prevent prussic acid poisoning, follow these recommendations for grazing or harvesting frosted forages.

Grazing: Do not graze sorghum species on nights when a frost is likely, as high levels of the toxic compounds are produced within hours following a frost. After a killing frost, wait at least 7 to 10 days before grazing or green chopping forage, as prussic acid levels are highest in plant leaves and do not begin to decline until after the leaves have dried. After a non-killing frost, do not allow livestock to graze until the regrowth has reached a minimum of 2 feet in height or 2 weeks have passed, as the regrowth will likely contain high levels of prussic acid. When returning to grazing, don’t turn animals in hungry and use a heavier stocking rate and rotational grazing to reduce the risk of animals selectively grazing leaves or young growth that may still have higher concentrations of prussic acid present.

Harvesting: Proper field curing or ensiling can help reduce the potential for toxicity in harvested forages because prussic acid is volatile and some of the toxic components will dissipate as a gas during the drying or fermentation process. Forages should be ensiled for a minimum of 8 weeks if there was a risk of high prussic acid levels at the time of chopping. The prussic acid content in hay can be reduced by as much as 75% during the curing process, so hay is typically not hazardous when fed to livestock. Forages can also be analyzed prior to feeding to ensure the toxic compounds have been reduced to a safe level for consumption.

Sorghum species, along with several other species including millet, brassicas, oats, and other small grains, are susceptible to nitrate accumulation. Under normal growing conditions, nitrate from the soil is absorbed by the roots of forage plants and is supplied to the upper portions of the plant, where it is converted into plant protein. However, under adverse environmental conditions such as drought, frost, or sudden weather changes, plant growth ceases and metabolism slows but the plants continue to take up nitrogen from the soil, resulting in a buildup of nitrates within the plant. Nitrate levels will remain high until there is new leaf growth, which increases photosynthesis and provides energy to utilize the excess nitrate.

When livestock consume forages with normal nitrate levels, the nitrate is broken down by rumen microbes to nitrite and then further to ammonia, which is converted to protein. With high-nitrate forages, nitrites accumulate faster than they can be converted to ammonia, and the accumulated nitrite is absorbed into the bloodstream. Nitrite combines with hemoglobin to produce methemoglobin, which is incapable of transporting oxygen, ultimately leading to asphyxiation. Symptoms of nitrate toxicity are related to a lack of oxygen in the blood and include weakness, difficulty breathing, rapid heartbeat, staggering, muscle tremors, and inability to stand. Affected animals typically show signs of poisoning within a few hours after consumption, and ruminant animals are most susceptible due to the rapid conversion of nitrate to nitrate by rumen microorganisms.

Nitrate levels are typically measured as nitrate nitrogen (NO₃-N) on a parts per million (ppm) basis. Levels under 550 ppm NO₃-N are typically considered safe to feed for all classes of livestock. Levels between 550 and 1100 ppm NO3-N may cause problems in pregnant and young animals, and levels between 1100 and 2200 ppm NO3-N are typically considered toxic and should be fed with caution. Levels above 2200 ppm NO3-N are likely unsafe to feed. Unlike prussic acid, which accumulates in the leafiest portion of the plant, nitrates tend to accumulate in the lower portion of the stem and stalks. To prevent nitrate poisoning, follow these recommendations for grazing or harvesting frosted forages.

Harvesting: Delaying harvest until stress conditions have passed will help to lower nitrate levels within the forage and prevent toxicity. Because nitrates accumulate in the base of the plant, risk can also be reduced by cutting higher and leaving more stubble. The ensiling process can reduce nitrate concentrations by 30 to 60% following complete fermentation due to microbial degradation. However, nitrate concentrations are stable in cured hay so use caution if the forage must be baled and leave at least 12 inches of stubble to avoid baling the most toxic part of the plant.

Like with prussic acid, forages can be analyzed for nitrate concentrations prior to feeding. If forages are known to have higher than ideal nitrate levels, diluting the forage by incorporating a low-nitrate forage into the diet will reduce the overall nitrate consumption by the animal. Introducing the toxic forage slowly will help animals adapt, as well as feeding small amounts frequently rather than one large feeding. Increasing the energy content in the ration by offering a grain or high-carbohydrate feed can also help by enhancing metabolism in the rumen and aiding in the conversion of nitrates to protein, helping livestock to better tolerate higher nitrate levels in their diet.

Frothy bloat is the most common type of pasture bloat and results from the formation of a stable foam in the rumen that minimizes the animal’s ability to expel rumen gases. Consumption of forages containing high levels of soluble protein, such as alfalfa and clover, can contribute to stable foam production. Livestock suffering from bloat may indicate discomfort by stomping their feet or kicking at their belly. They will appear distended on the left side, and may die within hours.

Following a frost, plant cells rupture, producing small plant cell wall fragments and increasing the amount of K, Ca, and Mg present, all of which can increase the risk of bloat. Be aware that forage with bloat potential can be more likely to cause bloat for a few days following a frost event. If grazing pastures with high concentrations of bloat-inducing species like alfalfa or clover, waiting a few days to a week following a hard frost is a good management practice to reduce the risk of bloat.

This article appears on October 2021, Volume 12, Issue 7 of the Agronomy news.