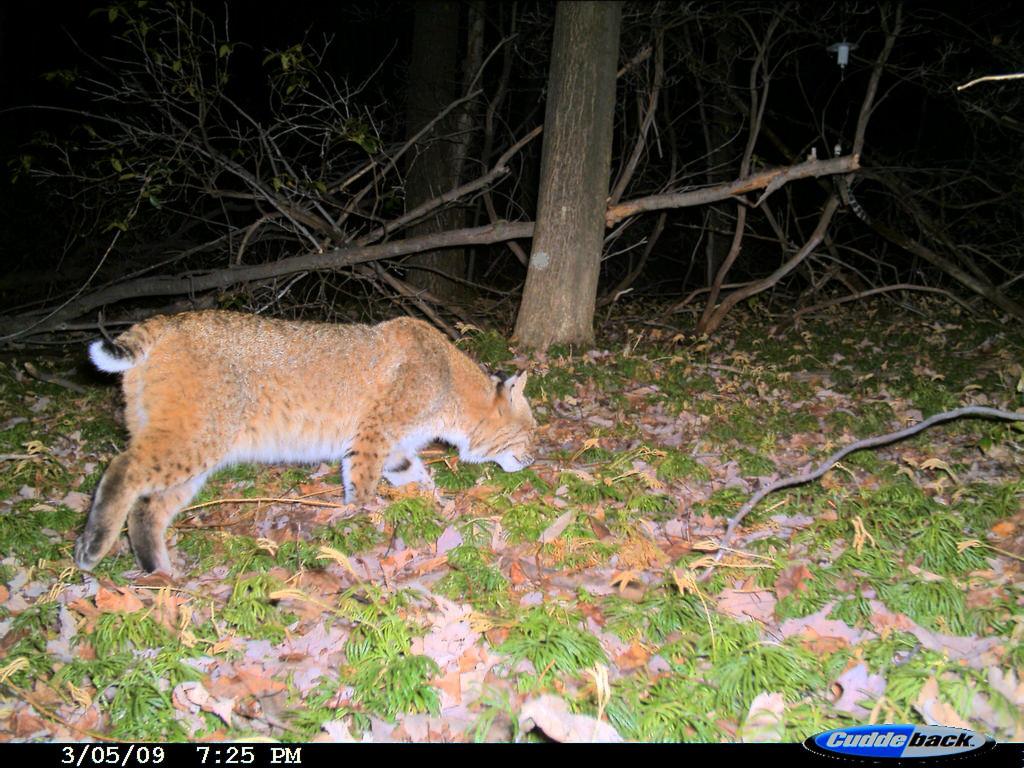 Bobcat caught on a trail camera, Garrett County, Maryland (3/5/2009). Camera placed by Zoe Hanley and Julia Smith during their bobcat/fisher study while graduate students at Frostburg State University. Photo by Boyer and McDowell.

North America is home to a variety of wild cats, including the Canada lynx in the north and the cougar in the west and southwest. But the bobcat (Lynx rufus) is the most widely-distributed native wild cat on the continent, and can be found in habitats from central Mexico to Canada. The bobcat’s range covers much of the United States, including Maryland.

In fact, the bobcat is the only type of wild cat found in Maryland. As the state’s forests have regenerated and aged since the mid-1900s, the cat has recovered portions of its original territory. It is primarily found in the western counties of Allegany, Garrett, Washington, and Frederick. A sighting in the Washington County community of Cascade made the news in April 2019. They are found across the ridge in Catoctin Mountain Park. Individual cats have been found as far east as the western shore of the Chesapeake Bay. Additionally, suspected bobcats made the news in 2018. An unconfirmed sighting of one occurred in Wicomico County (read more here), and a camera caught what wildlife officials believe was one in Carroll County.

Bobcats resemble large house cats with a number of differences (see box at right). The wide variation of coloring and patterns of spots and stripes make individuals easy to distinguish. The species’ preferred habitat is dense forests interspersed with open areas. They also inhabit swamps and bogs, and will frequent rocky ledges and slopes, which make ideal locations for courting and for creating dens. Like many cats, they are excellent climbers, and like other cats, they generally avoid water, but will swim when necessary. Their choice of habitat and their solitary nature may contribute to their infrequent contact with humans.

Within these habitats, the solitary bobcat will hunt for a wide variety of prey. It prefers live animals, using its keen hearing and eyesight for hunting small mammals such as mice, voles, rabbits, squirrels and woodchucks, as well as larger animals such as white-tailed deer. Hunting takes place during dusk and after nightfall. Bobcats may remain motionless for long periods or may stealthily move through the forest, patiently stalking their prey. They often cache their food by covering it with dirt, leaves, sticks or snow to conceal it from scavengers, and return for another meal later.

Each bobcat marks a territory of five to fifty miles in diameter, depending on how much food is available. A female’s home range will rarely overlap with that of another female, but a male’s range may overlap with other females’ ranges. The mating season (January to April) is the only time when males and females interact. Their behaviors may include yowling and hissing at each other as courtship.

After mating, they return to their separate territories. The female may create several dens throughout her territory, such as in rocky crevices or in brush piles, or in downed or hollow logs. They have also been known to take advantage of abandoned human structures, such as cabins or sheds.

The female will give birth after about a two-month gestation period. Most have litters of two to three kittens, and raise the young without assistance from the males. The kittens stay with their mother during the late spring and early summer. They begin exploring their surroundings after four weeks and are weaned after about two months. They spend the rest of the summer learning how to survive on their own. By early fall, the young leave to find their own territory. Females mature after one year and males after two.

Adult bobcats have no consistent natural predators; scientists record individual cases of falling prey to larger animals such as cougars and coyotes. Foxes, coyotes and large owls will prey on bobcat kittens. Generally, their only threats come from human activity. Although they were once hunted and trapped for their fur, there is currently no season for such activities in Maryland.