Invasives in Your Woodland: Kudzu 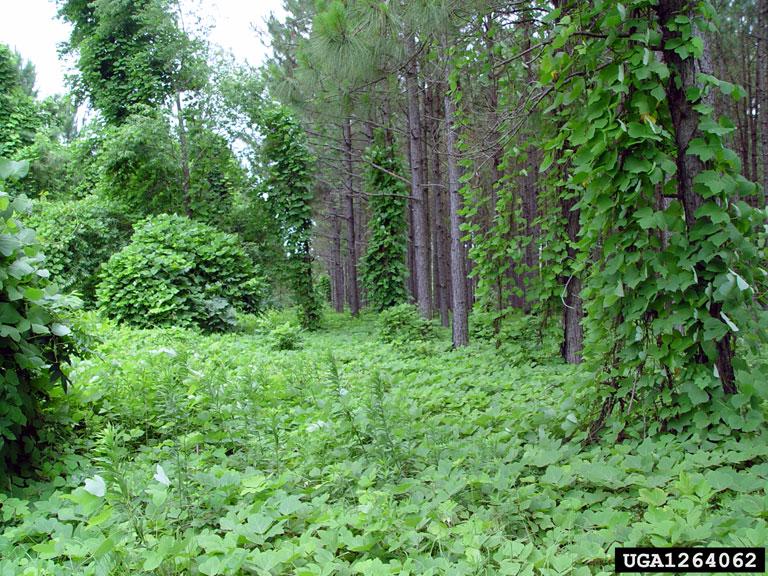 Kudzu has become such an iconic invasive plant in the United States that it’s found in many parts of American culture, particularly in the southern states. The name appears in coffeehouses, cafes, bakeries, and more; Kudzu: A Southern Musical toured the country; schools and communities elected kudzu kings and queens; and one blogger commented that apparently all a writer needed to do to become considered a Southern novelist was to “throw in a few references to sweet tea and kudzu.”

But is kudzu really, to borrow the title of a novel, “The Vine That Ate the South”? Certainly it grows prolifically and can be found throughout the South. It is found as far west as Texas and as far north as Massachusetts and Michigan, as well as in most of West Virginia, Virginia and all of Delaware. In Maryland, it is mostly confined to areas east of Frederick County and the lower Eastern Shore, and in Pennsylvania it is found mostly in the southeastern counties. See the distribution map below.

Kudzu (Puerania montana var. lobata) was introduced to the United States from Asia during the 1876 World’s Fair Centennial Exhibition in Philadelphia. During the Great Depression, it was touted as a way to reduce farmland erosion, as grazing fodder, and as a means to stabilize steep slopes along railroad and highway rights-of-way. The newly-created Soil Conservation Service offered bounties to farmers willing to plant the vine. While it failed as a cash crop, it excelled at spreading where it was not subject to grazing.

Kudzu is a deciduous, climbing, semi-woody perennial vine that grows 35 to 100 feet long. It grows via runners, rhizomes, and from nearly every node that touches the ground. The vine also produces flowers after its third year from June to September, if it is growing off the ground onto trees or other vertical surfaces. It spreads most rapidly in open areas, including disturbed areas such as abandoned fields, roadsides, and forest edges. It grows best in deep, well-drained loamy soils and where winters are mild.

Kudzu can form thick mats along the ground and into trees. The vines themselves can grow up to 10 inches in diameter, with taproots that can reach 7 inches in diameter and extend more than ten feet underground. The mature bark is rough, rigid, and dark brown. The leaves are alternate and compound with three broad leaflets up to 4 inches across. They may exhibit lobes unless the vine is growing in the shade. The leaves and the smaller vines will die off with the first frost. Stems that climb vertically, such as those invading woodland edge habitats, can overwinter in the canopy. See the photo gallery on the next page.

Mechanical methods of control include repeated cutting of vines just above ground level and frequent mowing. Chemical methods have also been found to be effective; readily-available herbicides such as glyphosate and triclopyr can be applied by spraying climbing vines as high as possible. Additionally, herbicides can be applied to cut vines.

One of kudzu’s natural predators, the Japanese kudzu bug, arrived in the US in 2009. It was first discovered in the Atlanta, GA area and is suspected to have arrived via an airplane at the nearby airport. Since that time, it has worked its way north, feeding on the vines in the surrounding habitat. It is now found as far north as central Maryland. Research continues on whether this invasive insect will help control the invasive vine.

The True Story of Kudzu, the Vine That Never Truly Ate the South (Smithsonian.com)