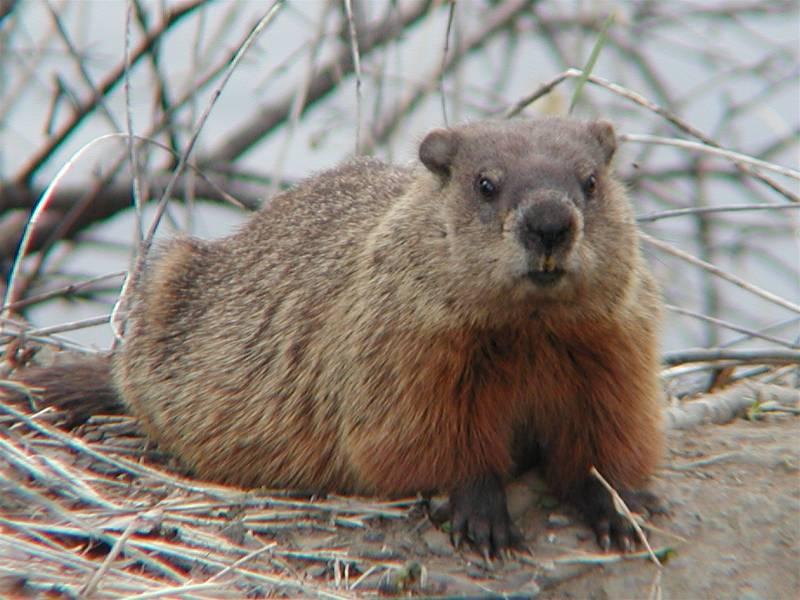 The woodchuck (Marmota monax) may be one of the most celebrated yet misunderstood or maligned mammals in North America. One the one hand, it has a handful of nicknames, including the popular “groundhog” or “whistle-pig” and the lesser-known “ground-pig,” “thickwood badger,” or “red monk.” Its best-known representative has an international day of fame every year when the current Punxsutawney Phil predicts whether spring will come early or if there is six more weeks of winter to come. Yet there are many who are not fans of the woodchuck; some consider them to be pests. Let’s take a closer look at the woodchuck and its place in the environment.

The woodchuck is a type of rodent known as a marmot, with a natural range across a wide swath of North America, from New England to northern Alabama and as far west as the Mississippi River valley. They are common throughout the mid-Atlantic region, including Maryland. They measure on average 15 to 25 inches in length, including a 6 inch tail, and can weigh 4 to 9 pounds. Males are larger than females, with their grizzled, coarse fur ranging from gray to cinnamon to dark brown.

They are typically found in low elevation forests, small woodlots, fields, pastures and hedgerows. Human activities, such as clearing woodlands for agriculture, housing, or recreation (such as golf courses), has increased their native habitats. They are most active during early morning and late afternoon during the summer and mid-day during spring and autumn. They will stand on their hind legs periodically to look for predators as they feed. When threatened, they may climb trees to escape, or use their teeth to defend themselves. Their distinctive shrill whistle alerts others, particularly their young, of danger. Other vocalizations include grunts, purrs and hisses.

Woodchucks excavate burrows for sleeping and for rearing young, and may construct a separate burrow below the frost line specifically for the winter. Each burrow will have two to five entrances. Abandoned dens are used by rabbits, opossums, river otters, and other species.

Contrary to popular culture, woodchucks do not emerge from their dens on February 2nd to predict the weather. At that time, most woodchucks, especially in northern latitudes, are still in hibernation in their underground dens. However, males do wake up early in order to scout for females. Mating takes place during a ten-day period in early March, with the female giving birth in April. Most litters range between 3 and 5 pups. The female provides all the care for the young. They are weaned after about six weeks, and are independent at about two months of age.

In the wild, the woodchuck lives from four to six years, but often do not live past age 3. Unlike some of their cousins, such as prairie dogs, woodchucks are basically loners. According to Stam Zervanos, retired biology professor at Penn State—Reading, “They are pretty solitary for most of the year, so the male has no clue where the female is most of the year except when they’re ready to mate.” Predators include hawks, snakes, black bears, foxes, as well as wolves, coyotes, lynx, and bobcats.

Their natural diet includes alfalfa, dandelions, and clover, as well as insects, bark, and leaves. Where human activity is present, they will eat garden crops such as corn, lettuce, peas, and beans, as well as various fruits and flowers.

In addition to this perhaps-unwelcome activity, their burrows can pose a hazard for farm equipment. According to Prof. Zervanos, “tractors can break an axle” when driving over them. Livestock may become injured if they break through the roof of a burrow or one of its tunnels.

Property owners in Maryland who find woodchucks to be a nuisance may wish call the Nuisance Wildlife Information Line, available Monday through Friday at 877-463-6497 (toll-free in Maryland).