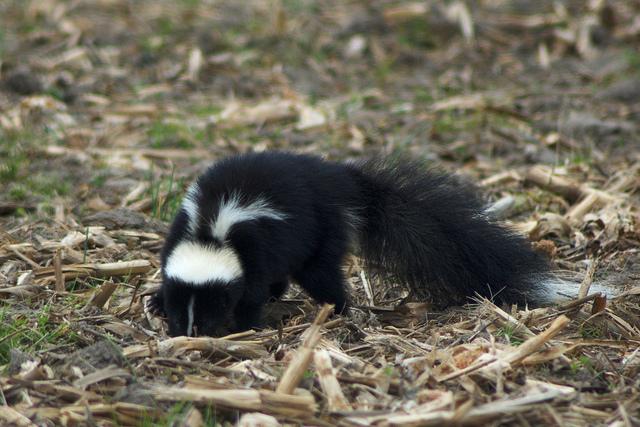 Maryland is home to two members of the skunk family. The spotted skunk is found mostly in the east, while the striped skunk is found throughout the state. The striped skunk is actually a very successful species, with a range that occupies a large portion of North America, including southern Canada, northern Mexico, and most of the United States. While the mammals have adapted to a wide range of environments, they prefer habitat with a variety of woodlands and open fields, which means they can also be found in both rural and suburban settings. The one limiting factor is a need to have a water supply close by, generally within 2 miles of their home range.

The striped skunk is a mostly nocturnal omnivore. As an opportunistic feeder, it will fill its diet with a variety of insects, small mammals, eggs, and occasional plants. It has sharp claws on its front webbed feet that it will use to dig for grubs, worms, and reptiles or amphibians, and that can aid them climbing trees in search of food. Their diet will vary depending on what’s available during each season. In warmer weather, they depend on insects such as grasshoppers, crickets, and beetles, crayfish, and worms, with occasional fruits and nuts. In colder weather, they may eat voles, young birds, or bird eggs.

As the Maryland winter approaches, striped skunks begin looking for a den to spend the winter. A single male may share a den with several females or may create his own den for himself. Striped skunks will dig these dens if necessary, but also may occupy one vacated by a groundhog or other animal. They do not hibernate, and may forage for food occasionally during the season, but generally rely on their fat reserves to see them through the winter.

Come spring, striped skunk males will mate with several females during late February through early March. The females will retreat to the den to give birth. Gestation takes approximately two months, so that by May a female is caring for an average litter of five or six young. The newborns are blind and deaf, and won’t open their eyes for about three weeks. They will remain in the den for up to seven weeks; after this, they will venture out with their mothers and stay with them through the summer before seeking new territory come fall. Some female yearlings will stay with their mothers into the coming winter.

Most striped skunks do not survive their first year, succumbing to the weather or disease. More mature skunks will fall prey to foxes, coyotes, bobcats, and badgers. Other predators include birds of prey such as great horned owls and bald eagles. The advantage that these birds have over their terrestrial counterparts is that, because they have no sense of smell, they are unaffected by the striped skunk’s last means of defense: its spray.

The spray, which can not only offend the nose but sting the eyes, can reach 12 feet from the skunk; the mist of the spray and the odor can travel considerably further. To a chemist, the spray consists of of four carbon and hydrogen compounds called thiols. To one early 20th century naturalist, it was a mixture of perfume musk, essense of garlic, burning sulfur and sewer gas magnified a thousand times. After spraying, the striped skunk will take the opportunity to run away from the intruder, which will be more interested in dealing with the spray than with the skunk.

While the species plays an important role in insect control through its diet, the striped skunk’s reputation among humans is often based on its digging behavior, in search of food in lawns and gardens, and on its odoriferous interaction with curious dogs. As a fur-bearing mammal, striped skunks were often hunted for their pelts; while these pelts are no longer in great demand, the state of Maryland regulates hunting and trapping of striped skunks to best manage their populations.