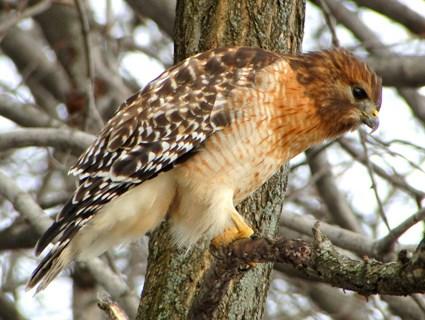 Red-shouldered hawks are a common resident in the mid-Atlantic states. They are medium-sized raptors, measuring 15-19” long with a wingspan of 37-42”, that can be found perching on tree branches in bottomland hardwood stands, flooded deciduous swamps, and upland mixed deciduous-conifer forests. They prefer relatively open understories that enable them to soar between trees in search of prey.

Although much of the Red-shouldered hawks’ original habitat in the Eastern United States has been lost to agriculture and residential areas, the species’ population appears to be stable, with increases estimated since the 1960s. This is perhaps due to the banning of pesticides such as DDT as well as efforts to conserve and expand woodlands and riparian ecosystems. Today they may be seen not only in traditional habitat areas, but in suburban neighborhoods and parks, where tall trees and open spaces provide opportunities for hunting.

Red-shouldered hawks are steady and strong fliers with wings held slightly forward when soaring, giving an impression of reaching into the air. The bodies have brilliant rufous under-feathers with faint white barring and dark streaking on the body which lends to a mostly orange appearance. The tail feathers are black with narrow white bands and fan out during flight.

One of the most distinctive features of the Red-shouldered hawk is its call, which enables observers to often hear them before seeing them. The clear, whistling rising kee-rah calls are conspicuous, especially in the spring, and tend to be repeated 5-12 times. The call may be imitated by blue jays. (This YouTube video includes a Red-shouldered hawk calling and a blue jay mimicking.)

Like many other North American hawks, the Red-shouldered hunts small mammals such as voles and chipmunks; amphibians such as frogs and toads; and reptiles such as snakes for its meals. They may also hunt the occasional small bird. They can hunt either from a perch or while flying.

Red-shouldered hawks that live in its northern range, from the Ohio River valley through the Great Lakes and northern New England, migrate to wintering grounds in the south, extending to Florida and the Gulf Coast of Mexico. Those that live in the mid-Atlantic states, especially in wetland forests, tend to stay in one area year round.

Regardless of their seasonal patterns, mated pairs return to the same nesting area for several years in a row, often using the same nest more than once. The nest is usually built by both males and females in a fork of a main trunk or at the base of branches high in a deciduous tree, as much as 65’ off the ground. The birds construct the nest from sticks and line it with bark, moss, and green vegetation.

The female lays a clutch of 3 to 4 pale bluish-white eggs, blotched with brown and lavender, and does most of the incubating. The eggs hatch roughly 33 days later. The female stays with the young while the male hunts and brings food to her for her to feed the young. The young can leave the nest within 7 weeks of hatching and are fed by the adults for up to 10 weeks more before becoming independent.