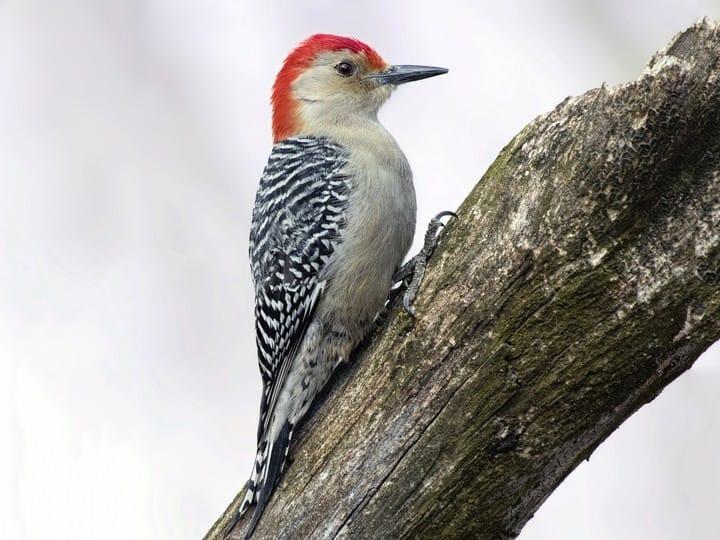 The first time you see one of these birds — perhaps as you walk in the woods, or perhaps as you watch your backyard feeder — you might be inclined to label them as “red-headed” woodpeckers. That name actually belongs to another species, which has red feathers covering its head. Instead, the red-bellied woodpecker is named for the adult male’s red belly, which is often difficult to see. Its other distinguishing features are barred wing, back, and tail feathers, and a stripe of red feathers across the bird’s head and neck. In the male, the stripe is uninterrupted; the female has a patch of grey feathers above her eyes.

The red-bellied woodpecker is common throughout Maryland, although it is less common in Garrett County. They are non-migratory, year-round residents throughout the majority of its range. They average 9 inches in length, which makes them larger than a robin but smaller than a crow. They weigh up to 3 ounces and have a wingspan from 13 to 16.5 inches.

Their natural habitat includes old stands of oak and hickory, but are also found at suburban backyard bird feeders. Their preferred diet includes insects and spiders as well as acorns, seeds, nuts and fruits; some nuts or seeds they find in the fall may be stored in tree bark crevices for consumption during the winter. They will climb along tree trunks in search of food, picking at the surface of the bark rather than drilling into it.

While red-bellied woodpeckers may not create the tell-tale holes in trees that other woodpeckers make, they are prodigious excavators for nesting. After selecting a dead tree (it doesn’t matter if it’s a hardwood or a softwood), the male will begin to dig away at its bark and inner layers with his beak to create a cavity. During this time, he will try to attract a mate by calling and tapping on the wood around the cavity. When a female accepts, she will tap as well and helps him finish the cavity.

The same pair may nest in the same tree year after year, but will create a new cavity each year, often placing the new one beneath the one from the previous year. These holes can be up to 12 inches deep, with a cylindrical living space of 3 by 5 inches. The female lays her eggs atop the wood chips at the bottom of the cavity. The clutch usually consists of 2 to 6 eggs. In the bird’s northern range (southern New England to central Minnesota) they will raise one brood a year. In the south (southern Florida to eastern Texas), they can have up to three.

The pair shares the duties of incubating the eggs, with the male sitting on the nest during the night. The eggs hatch after 12 to 14 days; the young are fed by both parents both before they leave the nest after about a month and afterwards for up to 6 weeks.

The mature red-bellied woodpecker has the distinctive undulating flight of other North American species, as well as the distinctive arrangement of toes. Instead of three toes facing forward and one backward, like most birds, they have two facing backward, which assists their climbs up trees and other vertical surfaces. One unique aspect of their anatomy is the ability to extend their tongue up to 2 inches beyond the end of its bill.

The red-bellied woodpecker had been in decline in some northern areas during the first half of the 20th century, but since then, populations have stabilized and may be increasing slightly, while extending its range to the north.