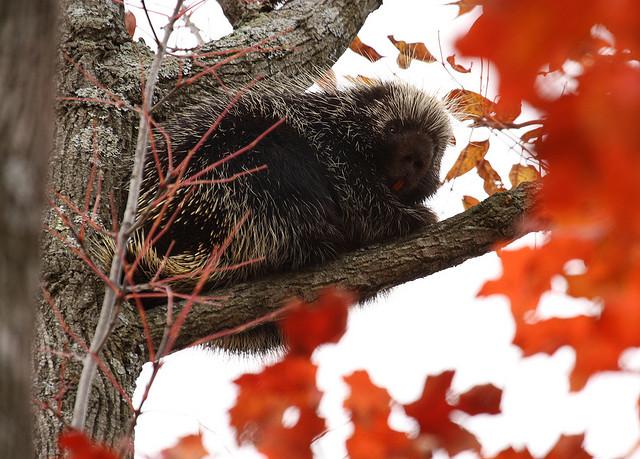 Say the word “porcupine” and the image that immediately jumps to mind is its quills. These modified hairs have evolved into sharp, barbed, and hollow spines—up to 30,000 on an individual porcupine— that cover all of the animal except for the underbelly, face and feet. They form an amazing defense network that can be become embedded in an attacker’s face, which often serves as an effective deterrent against further attack.

However, the quills are only one feature of this rodent. In fact, it is the second largest rodent native to North America; only the beaver is larger. Its range includes most of the continent, stretching from Alaska in the northwest, through the Dakotas and the Great Lakes area, to the Canadian maritime provinces in the east and south to Virginia. It is also found along the west coast as far south as northern Mexico, including the desert southwest. It is not found in the Great Plains south of Nebraska and apparently is no longer found in the southeast. In Maryland, it is found in the western counties of Allegany, Garrett, Washington and Frederick. A porcupine’s presence is often a surprise to humans due to the animal’s solitary nature and mostly-nocturnal behaviors.

The porcupine’s preferred habitat is mixed conifer-deciduous woodlands, where they will feed on a wide variety of plant material that changes with the seasons. For example, in the winter, they often consume evergreen needles and inner bark of trees. They may even girdle a tree, causing long-lasting damage or even the death of the tree. In spring and summer, they shift to berries, seeds, grasses, leaves, roots and stems. They are prodigious and adept tree climbers, using long, curved claws on their feet to ascend into the canopy in search of buds or leaves. As winter approaches, they may join other porcupines in a den for the winter, such as in a downed tree or a hollow log. They do not hibernate, but stay active through the winter months.

Unlike many animals that take their cues from the lengthening days of spring in the northern hemisphere as the approach of mating season, some female porcupines have spent the winter pregnant. For them, mating has taken place in the fall and early winter after an elaborate courtship involving extensive vocalizations and a courtship dance. During mating, which usually takes place in a tree, the pair will flatten their quills against their bodies to prevent injury. Gestation lasts 205 to 217 days, resulting in the birth of a single young in the spring or early summer. The young are born with a full set of teeth and with open eyes, and although they can eat solid food immediately, they will nurse for four months.

The newborn’s quills begin to harden an hour after birth. They will come in handy as the porcupine matures, as they are its only line of defense. When confronted, they will chatter their teeth and produce a chemical odor to warn the predator. If that fails to convince the attacker, the porcupine will turn its back, raise its quills and lash its tail. It is during these actions that a predator may get a face-full of quills; contrary to popular belief, the porcupine does not throw the quills at the attacker, but they are loosely attached to the skin so it may appear to an observer and an attacker that they have been ejected.

Porcupine predators include great horned owls, bobcats, coyotes and fishers. The latter are apparently particularly adept at attacking the porcupine’s belly in order to avoid the quills.

Porcupines are not federally endangered, but in Maryland it is a watchlisted species, meaning that it is in need of conservation. The species’ slow reproduction is one factor; interactions with humans and automobiles is another (for example, many are killed along I-68 that cuts through its habitat). A third factor is that one its favorite tree species, the Eastern hemlock, is under pressure by an invasive insect, the hemlock wooly adelgid. These factors present challenges to the porcupine’s numbers in Maryland.