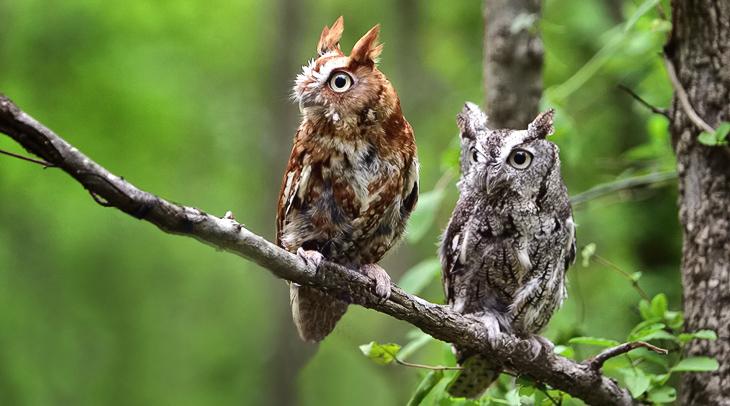 As winter days shorten, you may hear an odd call drifting through Maryland’s landscapes after sunset and into the evening. The call sounds much like the whinny of a horse, but in fact it belongs to one of the state’s native hunters: the Eastern Screech-Owl.

This owl may be difficult to observe, due to its size and its coloration. The birds are relatively small, compared to other owls, generally measuring less than 9 inches in height. This makes them similar in size to more familiar birds, such as the robin and the starling, but are bulkier than both. But their coloration sets them apart from other North American owls. Adults may be found in two color forms, called “morphs.” Both the grey and the reddish-brown (or “rufous”) morph enable the owl to blend in with the woodlands’ trees, and the rufous morph distinguishes the Eastern Screech-Owl from other Eastern owls; all other rufous North American owls are found in the west.

Regardless of their color form, these owls are highly adaptable to Maryland’s ecosystems. They live and breed successfully in suburban landscapes, city parks, and anywhere that at least some trees are found. They prefer cavities in old trees or snags for nesting, and will occupy locations originally excavated by woodpeckers or formerly used by squirrels. They will also adopt nest boxes if they are available. Eastern Screech-Owls may disappear from an area if all the trees are removed, but will return when trees are replanted, especially if nest boxes are installed.

The bird will spend daylight hours secluded in the holes of snags or in dense cover before emerging at dusk to hunt during the night. Like many owls, they wait on perches above the ground, waiting for their prey to pass below, and then swooping down to hunt. Also like other owls, they are generalists when it comes to diet. They will consume rats, mice, squirrels, moles, rabbits, as well as amphibians and song birds. Their diet also includes a large number of insects and earthworms.

As winter moves towards spring in Maryland, Eastern Screech-Owls begin searching for mates. They have an elaborate courtship ritual, beginning with males approaching females. The male bobs and swivels his head, bobs his whole body, and may even wink at the female. If she accepts him, they will touch bills and preen each others’ feathers. They breed in Maryland from mid-March to mid-May. While they often form pairs for life, the male may sometimes take more than one female partner. The birds do not form nests but make use of whatever materials exist in the tree cavity, such as wood chips or an old nest.

The female lays 2-6 eggs. Incubation lasts about 26 days, and young are fledged after an additional month. The male brings food to the female as she does most of the incubation and raising the young. Once summer turns to autumn, the juveniles will disperse to find new territories.

Eastern Screech-Owl populations are difficult to determine due to their nocturnal nature. Its native range stretches from maritime Canada, west to the plains of Alberta, south to northern Mexico and the gulf coast, and along the entire eastern seaboard. The North American Breeding Bird Survey estimated that the species’ numbers declined in the United States during 1966-2015, but grew in Canada during the same period. Partners in Flight estimates a global population of 900,000, with 95% of those living in the U.S.

For more information about the Eastern Screech-Owl: