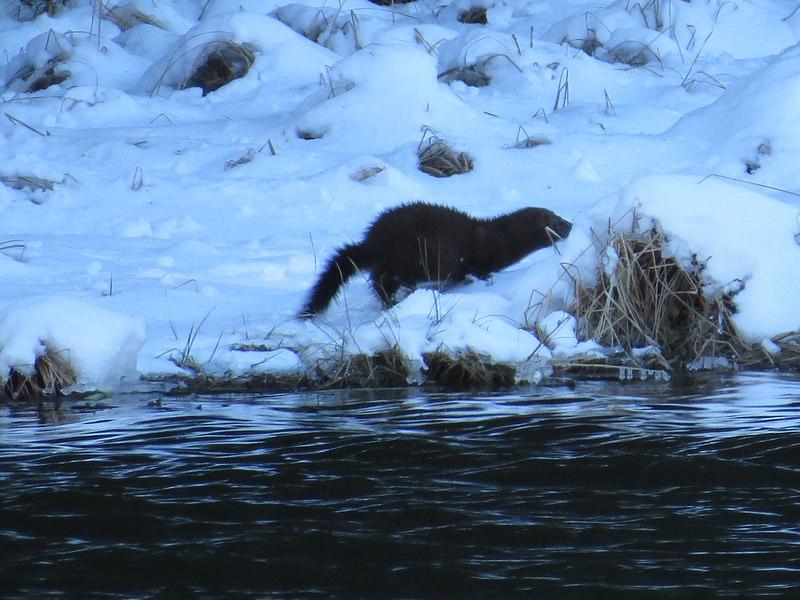 The weasel or “mustelid” family has several members that live in Maryland. While a few, including the ermine and the American marten, are extinct in the state, and another, the fisher, seems to have expanded into the state from a reintroduction program in West Virginia (far south of its native range), the one that is found throughout most of the state is the mink. If you have woodlands with a permanent water source such as a lake, river, or wetland, you may have prime mink habitat. But because they are solitary and are most active at night, they are seldom seen in the wild. They live throughout Maryland, with the exception of the Eastern Shore. They will favor areas with water that include dense brush or woodlands.

The mink is likely more popular as a concept than as an actually-observed animal. The phrase “mink coat” conjures up images of wealth and prestige. Long prized for its sleek, water-resistant fur, mink were trapped throughout large sections of the continent by both indigenous and colonial Americans. Today, mink populations are considered stable, thanks in part to changing tastes in fashion and in improved water quality in the continent’s rivers and streams.

Water-based habitats provide a significant portion of the mink’s diet. They will hunt muskrats, waterfowl, fish, crayfish, plus waterfowl and marsh nesting birds. They can hunt on the water’s surface as well as dive under water for prey, although its eyesight underwater is not as clear as on land. The species’ streamlined body results in low water resistance while swimming, but unlike its cousin the otter, which uses its webbed feet for swimming, the mink swims mostly by undulating its trunk. Additionally, they are skilled climbers, ascending trees to hunt small rodents and other prey. The diet often changes with the season and the availability of prey. Summertime brings a variety of frogs, waterfowl and fish. In the winter, the mink relies more on small mammals such as mice and rabbits.

During the winter, males and females come together for breeding; they are solitary the remainder of the year. A male will defend a territory along a river bank from other males but that includes home ranges of several females.

Within that territory, the mink will create a den, but the type and location of den varies widely. It may be a hole under a log or in a tree stump, or in a hollow tree. It may be a long burrow in a river bank that they have excavated or one that was previously occupied by muskrats, badgers or skunks. An excavated burrow can be up to twelve feet in length, with twisting passages and multiple entrances.

Mating may occur as early as February, but the reproductive system of mink and other weasels feature delayed implantation, in which the fertilized egg will not implant for up to a month after breeding. During the resulting gestation, which lasts up to six weeks, the female will remain in the burrow’s nesting chamber, which has been lined with straw and feathers. Here, she will give birth to a litter of two to ten kits typically in April.

During the spring, the young remain with their mother; the male does not participate in raising the kits. The young are weaned after six weeks, but stay with their mother until late summer. Consequently, the month of August is an important one for mink: the young begin to leave in search of their own territories, and the adults begin their second molt of the year after an earlier one in April.

Mink have few natural enemies. They are occasionally hunted by coyotes, bobcats, or great horned owls. They do not hesitate to take on animals larger than themselves in defense. While large-scale trapping by humans for fur has been mostly replaced by commercial breeding ranches, many states, including Maryland, have established trapping seasons to help maintain healthy populations.