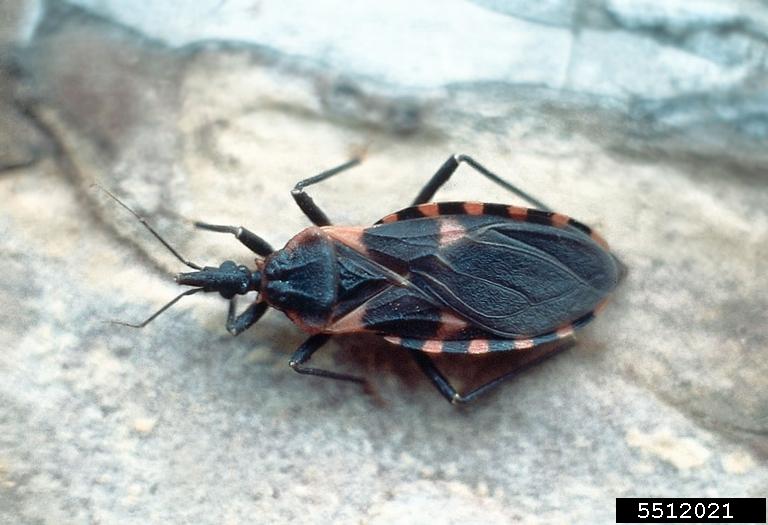 Adult eastern bloodsucking conenose bug (Triatoma sanguisuga) has an elongated head and six red-orange markings along the side of its abdomen. Photo: Kansas Department of Agriculture , Bugwood.org

Kissing bugs are present in Maryland, but they are of little cause for concern. The risk of contracting a disease from them is extremely low.

Kissing bugs, conenose bugs, or vampire bugs are all common names for a group of insects in the subfamily called Triatominae, which is part of a larger group known as assassin bugs (family Reduviidae). Unlike other assassin bugs which are considered to be beneficial insects in the garden and feed on other insects and invertebrates, kissing bugs are considered to be pests and most species only feed on the blood of vertebrates.

Adult Kissing bugs in general range in size from 3/4 - 1 3/4 inches in length. They have an elongated cone-shaped head with elbowed antennae and a slender beak-like structure on the underside, which is their mouth. Most will have some type of red-orange banding on their abdomen. Their legs are uniformly thin, with no 'bulging' or thicker areas on them.

The adult eastern bloodsucking conenose bug is 3/4 inch (19 mm) long. They are dark brown to black in color, with flattened bodies. Their abdomen is wide, and the sides stick out past the wing margins, displaying six reddish-orange lines along both sides. Nymphs (the immature insects) range in size based on species and age. They will have elongated cone-shaped heads like the adults but will not have the red-orange banding on their abdomen.

Kissing bugs go through incomplete metamorphosis, meaning they have an egg, nymph, and adult stage. They have 5-8 nymph or instar stages. At each stage, they will take at least one blood meal before molting to the next instar. Blood meal hosts may include humans, dogs, wildlife, chickens, and more. Right after feeding, some species of kissing bugs will defecate (poop), which is how the parasite Trypanosoma cruzi is transmitted.

Time needed between life stages will vary based on temperature and host availability. Once they reach adulthood, female kissing bugs will mate, feed, and lay eggs. She will mate with several different individuals and can lay hundreds of eggs in her lifetime.

The main concern with kissing bugs is not their bite but instead their potential to be vectors of the parasite, Trypanosoma cruzi, which causes Chagas disease, also known as American trypanosomiasis. Chagas disease is found worldwide, but the majority of new cases due to transmission by kissing bugs are found in rural areas of Mexico and Latin America.

Kissing bugs get infected with the T. cruzi parasite by feeding on an infected animal or person. However, unlike other arthropod-vectored diseases such as Lyme disease, the T. cruzi parasite is not spread through the insect's bite but rather through its feces. Kissing bugs hide during the daytime and come out during the nighttime when the inhabitants are sleeping. They tend to bite people on the face and right after feeding will defecate (poop). Individuals can become infected by accidentally scratching or rubbing the insect's feces into the bite wound, eyes, or mouth.

While there are wildlife hosts of the T. cruzi parasite in North America, the likelihood of contracting Chagas disease from the eastern bloodsucking conenose bug or another native species of kissing bug is low since they do not defecate on their hosts immediately after feeding like many of the species native to Central America do. Chagas disease also can be transmitted from a blood transfusion, organ transplantation, and mother-to-baby (congenital transmission).

For more information about Chagas Disease, please refer to the Centers for Disease Control and Prevention website, https://www.cdc.gov/parasites/chagas/.

These are some of the common insects that are often mistaken for kissing bugs.

The wheel bug (Arilus cristatus) is also a member of the assassin bugs group (family Reduviidae). It has a characteristic wheel on its back and red-orange markings along the side of its abdomen. 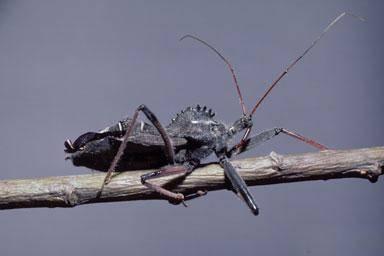 The boxelder bug (Boisea trivittata) is often mistaken for a kissing bug due to its red and black coloration. However, while the kissing bug has six red-orange stripes along the side of its abdomen, the boxelder bug has red along the edges of the front wings. Refer to our page about boxelder bugs for more information. 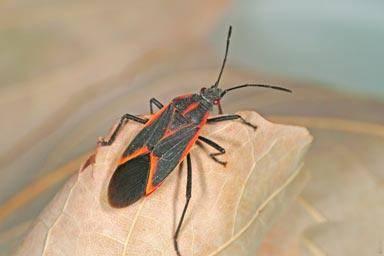 The adult boxelder bug (Boisea trivittata) is often mistaken for a kissing bug due to its coloration. Photo: Joseph Berger, Bugwood.org