Invasives in Your Woodland: Garlic Mustard 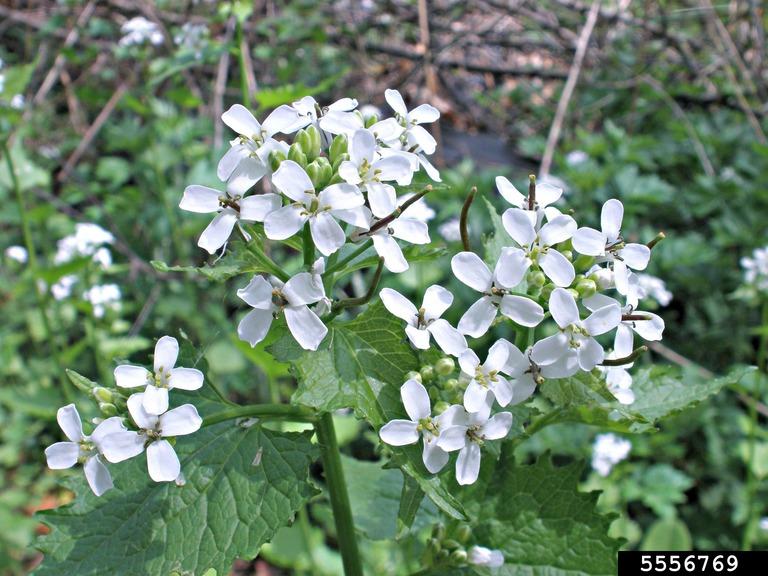 Garlic mustard is similar to several invasive plants found in the United States in that it was brought to North America with good intentions. However, unlike others, it was imported from Europe by early settlers for culinary or medicinal purposes. In its native range, it is a spice that has been used for centuries; samples have been found in pottery in Germany and Scandinavia that are more than five thousand years old. In North America, it was first recorded on New York’s Long Island in 1868. Since that time, it has spread across the continent.

Garlic mustard (alliaria petiolata) is also known as garlic root, hedge garlic, Jack-in-the-bush, and other names. It is a biennial flowering plant in the mustard family that is an aggressive invader of woodlands throughout the United States. In Maryland, it is recorded in every county except for those bordering the Chesapeake Bay; in most of Virginia (except for those along the Bay and most of the North Carolina border); all of Delaware and West Virginia; and all but two counties in Pennsylvania. It can also be found in lawns and other areas with enough shade for it to grow. See the distribution map below.

Like all other biennial plants, garlic mustard has a two-year life cycle. Seedlings germinate in the spring and form into low clusters of heart-shaped leaves called basal rosettes by midsummer. It stays in the rosette stage most of its first year. During this time, they will continue to photosynthesize whenever the temperature is above freezing, which provides them an advantage over native species. Since it only flowers in the second year, the plants may seem less numerous, as they are simply waiting to complete their life cycle. Garlic mustard is self-fertile, needing no assistance from animals or insects. Additionally, each plant can produce thousands of seeds, which are spread by wildlife, humans, water, or other means in mid-summer.

The plant also receives assistance in its spread because of its taste. White-tailed deer in particular find garlic mustard distasteful; because they do not consume it, they contribute to its survival by eliminating its tastier native competitors and expose the soil and seedbed through trampling.

Garlic mustard, in every stage of its life, can be identified easily by a garlic odor that exists when any part of the plant is crushed. The rosettes are heart-shaped and measure 1-6 inches long. The leaves become more triangular and toothed as the plant matures. In the second year, the plants produce flowering stalks from 1-4 feet tall. Each flower has four small, white petals that emerge in the early spring. The mature seeds are shiny black and are found in erect, slender green pods that turn brown upon maturity. See the Image Gallery below.

Garlic mustard is difficult to control once it becomes established. The ultimate goal is to prevent seed development and further spreading until the existing seed bank is exhausted. Because of the biennial growth pattern, full eradication may take 2-5 years in a single location.

Cutting the plants by hand and pulling plants before they seed are effective methods but may not be practical for large areas. Be sure to remove the taproot when pulling or it will re-sprout. Controlled burns may be effective under proper conditions; if the burn is too cool, it may assist the plants’ spread. A fire that is too hot may alter the soil composition. Herbicides may also be effective, and are most effective in the fall and winter when native plants are dormant. Always check warning and safety labelling information before using herbicides.