Identifying and Preventing Poultry Predators in the Mid - Atlantic Region 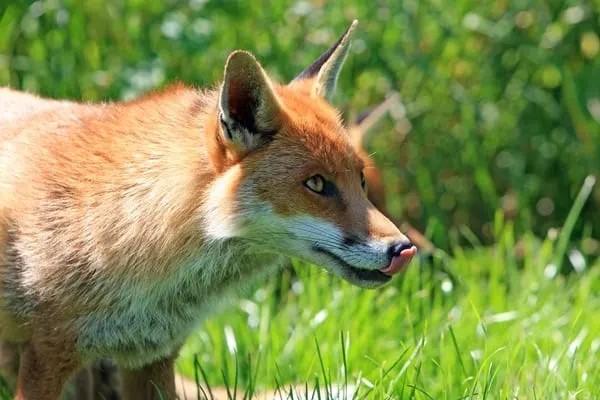 Owning a flock of chickens can be a rewarding and educational hobby as well as a source of fresh eggs. While more often a problem for small and backyard flocks, predators can cause damage and loss of birds on farms of all sizes (Table 1). This damage can range from an occasional bird loss to many birds nightly until the problem is fixed. While some predators will only kill/take birds, others will also cause damage to your coops, barns, or fields. These problems are even worse if the birds are pets or part of a 4H/FFA project. Predation increases when birds roam outside without protection, especially if the farm/residence is located near woods or a forest. Protecting your birds is a full-time job. Losing birds to predators can cause heartache as well as financial losses. If you choose to raise birds, it is imperative that you take every precaution to prevent predation.

Dogs are one of the most common poultry predators (Figure 1). This problem can be especially troublesome for those that live close to neighbors or subdivisions. Dogs will often chase and maul birds and leave them lying around the yard. Some will take a bird home with them, making it easier to identify the culprit. Most dogs do not cause trouble unless they are running in a pack. Foxes are notorious predators on poultry farms in rural areas but can also be a problem for those in town. Foxes are intelligent, sly and persistent once they find that they can get an easy meal. Foxes are careful and may stake out a coop for several days before they attack. They are often more of a problem in spring when they are raising young and other food sources are in short supply. Foxes may remove several birds from the coop in a single raid/ attack. Footprints and scattered feathers are often the only clues left behind both in and outside the coop, as foxes usually take the birds back to their den or another safe area. Coyotes will also take chickens and leave signs similar to foxes, making it difficult to identify the predator. A coyote often tunnels under the pen or forces its way in, leaving evidence, while a fox rarely leaves such evidence behind. Coyotes can dig into fenced areas rapidly and can jump fences up to 5 feet high.

Felines Include Common House Cats (Including Feral Ones) and Bobcats

While most people think of cats as pets, they can be deadly predators of chicks and young birds. They will eat small chicks entirely but leave the wings and feathers of young birds. Cats have been known to kill full-grown chickens, consume the meaty parts, leaving the rest scattered around. Bobcats will take birds of any size and leave behind only a few feathers. They often use their claws when taking birds so look for scratch marks along the side and back of the dead bird left behind and/or on any survivors.

Raptors Include Hawks, Eagles and Owls

While eagles and hawks will take birds during daytime and will eat larger birds at the kill site, they will carry smaller birds up in a nearby tree to consume them (look for feathers under the tree). Owls, on the other hand, will predate on the birds in early morning, late evening and at night (Figure 2). They have been known to enter coops at night to get birds. Again, they will carry the birds off to another location to consume them. Hawks and owls kill in similar ways, often eating the head and neck and perhaps leaving deep cuts in other portions of the bird from their sharp talons and beaks. While you may be able to exterminate predators such as foxes and raccoons, eliminating raptors is not an option. All eagles, hawks and owls in the U.S. are federally protected by the Migratory Bird Treaty Act and killing them could result in a very hefty fine and/or possibly jail time. Therefore, in the case of eagles, hawks and owls, it is better to protect your flock from raptors than try to eliminate them. Stringing a thin wire or even fishing line over the bird pen or run makes it hard for predators to fly in.

Raccoons and Opossums are Nocturnal and Difficult to Control

These predators will climb fences and even when a run has a cover with the smallest gap, they will find a way in (Figure 3). They will also climb coops and enter through any opening available. These predators have also been known to reach through the wire and grab birds, pull them up to the wire and consume them, even though they cannot enter the coop. Raccoons are very intelligent and can open simple latches, so make sure doors are locked to prevent their entry.

They can get through small holes so make sure that your poultry housing is in good repair. Minks and weasels enjoy killing for the sport of it, without consuming the birds. They usually kill by grasping the back of the neck or head, so look for lesions there when diagnosing which predator is involved. One interesting thing about mink and weasels is that they sometimes line up the dead birds.

There are Other Poultry Predators

Snakes are a common predator of small chicks. They also steal eggs (Figure 4). Snakes that are common on Delmarva generally are not a problem for older birds. An occasional snake, however, may have eyes bigger than its stomach and attempt to consume a larger juvenile bird. She will end up spitting the bird back up, but the bird will have suffocated in the process. The dead bird may be stretched out with its neck covered in mucous.

A few ways to prevent snakes from getting their meals from your flock is to keep eggs picked up. Find any nests that hens may be hiding. Protect chicks and young birds by confining them in pens made with wire openings that are too small for snakes to enter, such as rat wire.

Rats can be a problem for chicks and young birds. Dropped feed and untidy conditions near the coop may attract rats and wild birds that can be a biosecurity hazard to your flock.

Skunks pose a threat to young chicks and eggs. Skunks rarely attack large adult birds but often eat the head off baby chicks and open eggs at one end and eat the contents. Skunks will leave a telltale odor, so identifying them is usually fairly easy.

Footprints or lack thereof is one of the easiest ways to identify predators. For example, dogs and coyotes have similar size footprints while prints from foxes are smaller. Cat footprints will lack claw marks, while raccoons and opossums have handlike prints. For a depiction of animal footprints, visit https:// dnr.maryland.gov/wildlife/Documents/Key-Common-Mammal -Tracks.pdf.

Locking birds in a predator-proof barn/coop every night is advisable. If your birds have a fixed outdoor area (run), the fencing needs to go into the ground at least a foot deep and then make a 90o turn outward for at least another 8-10 inches to prevent predators from digging under the fence. By having the wire turn outward, predators will dig into the corner of the wire and will not be able to dig any further, preventing them from entering the run.

If windows are not glass, you will need to cover them with wire netting to prevent predators from entering (this also provides good biosecurity because it keeps wild birds out). If you open windows, they will need a predator-proof wire cover. Window screens do not stop most predators.

Moveable housing is an increasingly popular choice for small flocks. When using this type of housing, it is important that the edges of the structure are in contact with the ground to help prevent predation. Additionally, many growers that use moveable housing keep birds in pasture areas that are protected by fencing (often electrical) to help prevent predation. Electric netting made for poultry may work well for containing the flock and offer some protection against ground predators, provided an adequate charge is maintained throughout the entire fence line.

Motion-sensor lighting and loud noises may help keep predators away from your chickens. Some predators, however, may become accustomed to the lighting and noises so their usefulness is limited. Using objects with motion is a great deterrent. Motion objects may include CD’s on a thin wire, pinwheels, flags, dummy predators or scarecrows that move.

Game cameras can also be used to help determine which predators are active in your area. Because they are activated by motion sensors, cameras can be used at night. While they do not deter predation, the information they can provide is beneficial in preventing loss of birds.

Guardian animals may be an option to control predators for some poultry owners (Figure 5). Guardian dogs are a popular choice; however, you must take care to select the right dog. If not trained properly, guardian dogs can become predators for your flock. Once they kill a chicken, they will likely continue to kill them.

When selecting a guardian dog, you should choose one that has been raised with poultry and has been exposed to the same predators you are trying to control. Puppies and young dogs should not be left unsupervised with poultry. Choose dogs that are guardian breeds, such as Great Pyrenees, Anatolian Sheepdog or Maremma Sheepdog. If the dog is mixed breed, all breeds involved in the mix must be guardian dog breeds.

Guardian dogs need secure fencing as they tend to roam and may not do well on small acreage. Guardian dogs work well at deterring and controlling various predators, including raptors.

Other options for guardian animals are llamas, alpacas and donkeys. These guardians work well for controlling canine predators. These animals require more acreage to accommodate their sizes and maintain their grazing habits. 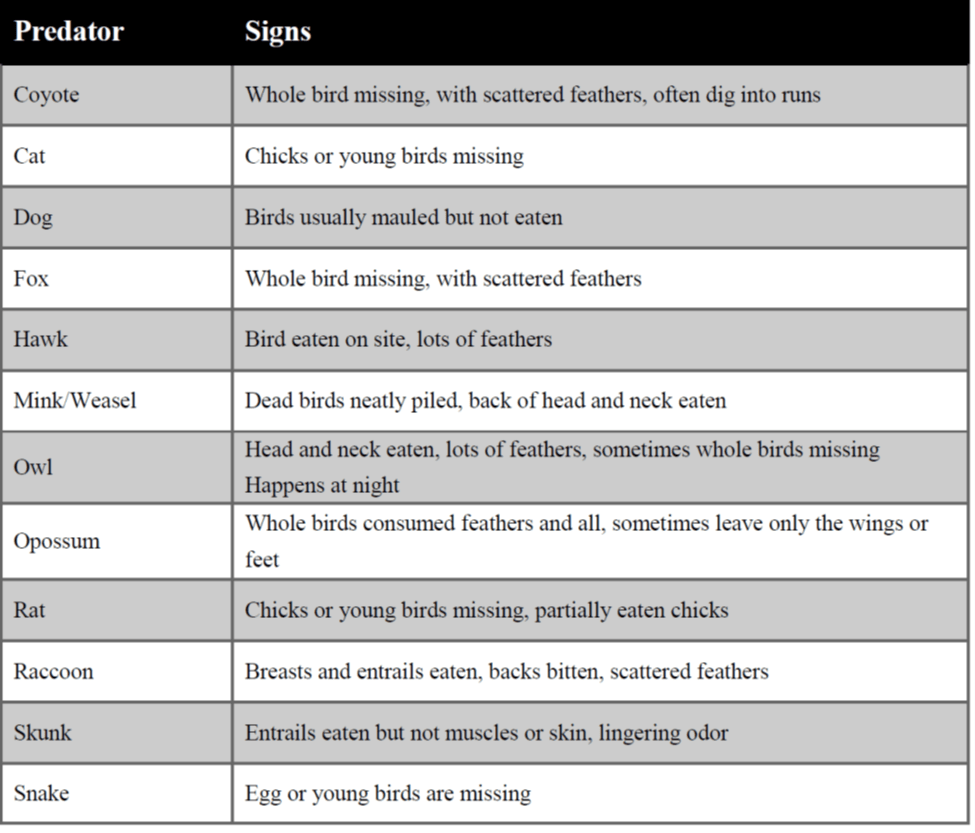 In Maryland, it is legal to kill foxes and raccoons that are harming poultry. Some owners also use live traps to capture problem animals and relocate them to a safe area. This is typically allowed but should be considered a last resort. Other predators, such as mink, may have seasons and you may be required to obtain permits to remove them. You should always check with the Department of Natural Resources before killing any predator outside of the normal hunting season. Predators, such as raptors, might be protected under federal or state law and you are not allowed to hunt them. According to Maryland state law, it is legal to kill a dog that a livestock owner witnesses killing or injuring livestock but should only be done after all other preventive measures have been taken. As long as you witness the dog doing this, you will be exempt from all potential criminal penalties and any civil lawsuits. Finally, check with the county to determine if rules exist for the dog’s owner to reimburse the owner of the poultry for the value of the lost birds.

This publication, Identifying and Preventing Poultry in the Mid-Atlantic Region (FS-1132), is a series of publications of the University of Maryland Extension and the Department of Agriculture and Food Systems. The information presented has met UME peer review standards, including internal and external technical review. For help accessing this or any UME publication contact: itaccessibility@umd.edu For more information on this and other topics, visit the University of Maryland Extension website at extension.umd.edu The University of Maryland College of Agriculture and Natural Resources programs are open to all and will not discriminate against anyone because of race, age, sex, color, sexual orientation, physical or mental disability, religion, ancestry, or national origin, marital status, genetic information, or political affiliation, or gender identity and expression.

Back to Publications Page

Back to Commercial Poultry Production

Back to Small Flock