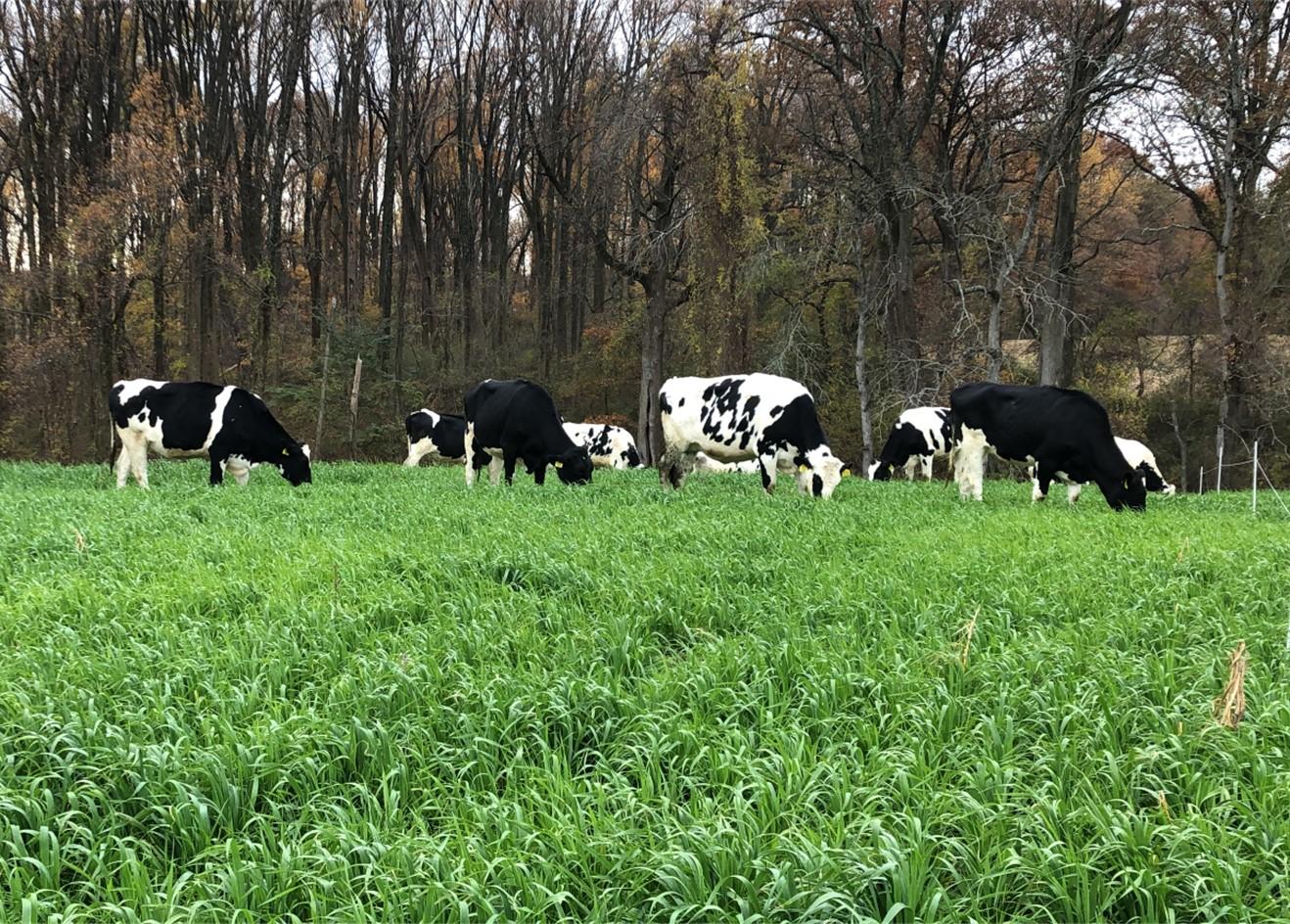 This past spring, we initiated a study at the Central Maryland Research and Education Center Clarksville Dairy farm to investigate the effects of improved grazing management on bred heifer performance. The objectives were to determine the effect of improved grazing management on heifer growth characteristics and first lactation performance, as well as the economic feasibility of a using a grazing system to mitigate costs associated with the replacement program.

Pregnant Holstein dairy heifers (n=60) from the Clarksville Dairy were utilized for this study. Heifers were enrolled in the study on a rolling basis following pregnancy confirmation, and were removed approximately 3 weeks prior to calving. Upon enrollment, heifers were randomly assigned to one of two treatments groups: control (CON) or rotational grazing (ROT). Groups varied in size throughout the study period (ranging from 15 to 22 per group) but were kept consistent between treatments at any given time.

...increasing utilization of pasture may be an economical choice for some producers to reduce costs on their farm without compromising performance.

Heifers assigned to the CON treatment were housed on one continuous, 6-acre perennial pasture consisting of mostly endophyte-infected tall fescue and fed a daily total mixed ration (TMR) consisting of mostly rye silage, corn silage, and hay. Heifers assigned to the ROT treatment were rotationally grazed across 21 acres of both perennial and annual pastures subdivided into approximately 0.6-acre paddocks; heifers were rotated to a new paddock every 1-2 days, depending on forage availability. Perennial pastures within the rotational grazing system were similar to the control pasture and consisted of mostly endophyte-infected tall fescue. Annual pastures within the rotational grazing system were established on a seasonal, rotating basis using cool-season annuals (triticale or triticale/oat/annual ryegrass mixture) followed by warm-season annuals (sudangrass/cowpea mixture). Heifers in the ROT group also received a daily ground corn/mineral mix at a rate of 1 pound per head per day to ensure appropriate mineral intake. An overview of the pasture layout and sizing for both groups is depicted in Figure 1.

The study began on April 7, 2021, and is expected to continue through December 22 based on forage availability for the ROT treatment group. Throughout the growing season, heifers in the ROT group alternated between annual and perennial pastures based on forage availability and growth; actual dates spent grazing the different forage types are shown in Table 1. Throughout the study, both groups of heifers were measured every two weeks to determine body weight, body condition score, and hip height. Forage samples were collected every two weeks to determine forage nutritive value; for each treatment group, samples were collected from the paddock immediately prior to grazing.

Initial body weight, body condition score, and hip height were similar between treatment groups. Final body weight and hip height were also similar between the two groups, but final body condition score was greater for CON heifers (3.7) compared to ROT heifers (3.5). Although final body weight was not statistically different, average daily gain was greater for CON heifers (1.9 lb/d) compared to ROT heifers (1.5 lb/d) over the course of the study.

Implications of the slightly lower body condition of ROT heifers are unknown, but we hypothesize that there may be a positive effect on first lactation performance since it is well-established that cows that calve with higher body condition are predisposed to metabolic problems (e.g., ketosis, fatty liver, etc.). Additional data analysis will explore possible carry-over effects of this management system on first lactation milk production, health, and reproductive performance once all heifers have calved.

Interestingly, heifers in both groups lost weight following their enrollment in the study, suggesting that both groups required an adaptation period to adjust to their new environment. Prior to study enrollment, all heifers were group-housed in a barn and fed a TMR once daily. Following study enrollment, CON heifers required an average of 23 days to regain their starting body weight while ROT heifers required an average of 35 days. The longer adaptation period for the ROT heifers is not surprising given that they experienced a more dramatic change in housing and diet compared to the CON heifers.

Heifer average daily gains varied considerably across weigh periods; this variability in daily body weight gains for both groups of heifers is demonstrated in Figure 3. Variability in daily gains was likely due to heifers entering/leaving the study, changes in forage type and forage quality (ROT group), and changing weather conditions. The ROT heifers appeared to perform substantially better while grazing the sudangrass/cowpea mixture during the heat of the summer, which is not entirely surprising given the nutrient profile of this pasture (shown in Table 2).

A detailed economic analysis comparing expenses between these systems is forthcoming. Although these preliminary results indicate a slower growth rate for ROT heifers, final body weights and body condition scores of these heifers were still acceptable and they achieved or exceeded 85% of mature weight at first calving. Because the replacement heifer program is typically the second or third greatest expense on the dairy and feed often exceeds 50% of those costs, increasing utilization of pasture may be an economical choice for some producers to reduce costs on their farm without compromising performance.

Producers looking to improve grazing systems on their farm should begin by exploring simple management changes, including the implementation (or increased intensity) of rotational grazing practices. Incorporation of annual forages into the grazing system may also help improve animal performance by offsetting the reduced summer growth (i.e. summer slump) in perennial pastures and mitigating the palatability and forage intake issues associated with endophyte-infected fescue pastures during the summer.

This study will be repeated next year using similar methodology. Moving forward, a comprehensive analysis comparing the economics behind heifer performance within each of these systems will be completed. Future studies will continue to explore how improvements in pasture management affect heifer performance and the economic viability of the heifer program.

We are grateful for the assistance provided by the staff at the Clarksville Dairy Farm in support of this study. This study was partially funded by the Maryland Agricultural Experiment Station Competitive Grants Program.