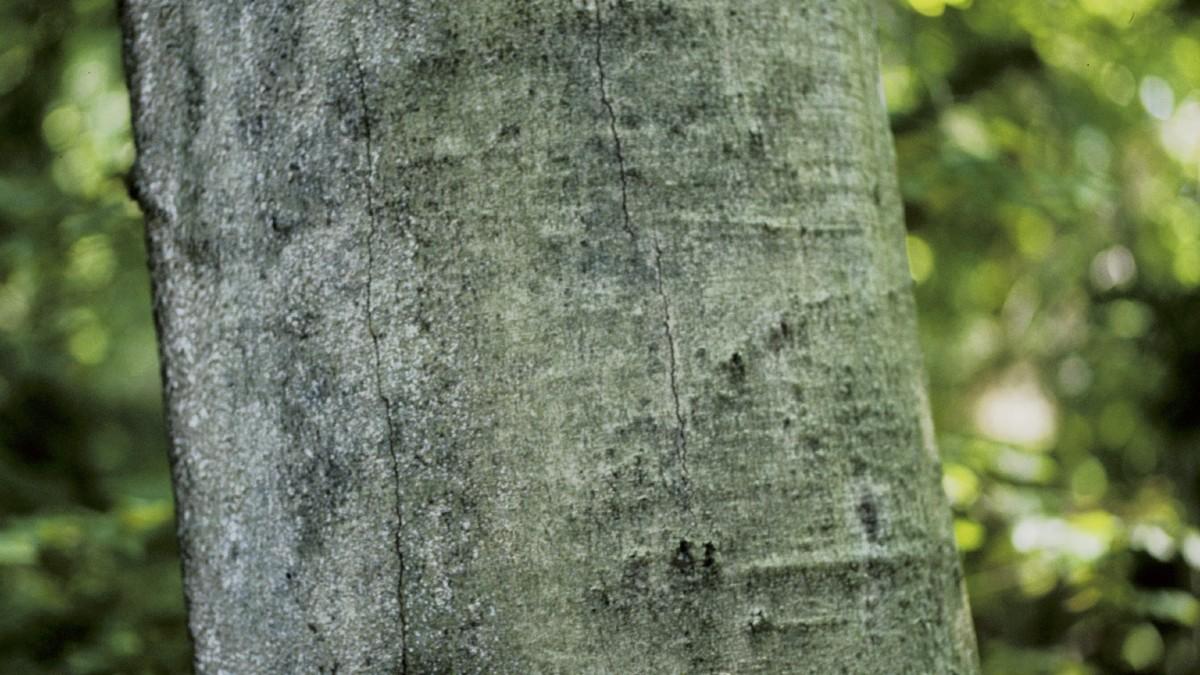 Beech Bark Disease (BBD) complex consists of two organisms, a scale insect and a fungal pathogen, which together create entry wounds and infection that kill beech trees. The beech scale (Cryptococcus fagisuga), causes wounds to the bark, allowing two fungi (Neonectria faginata and Neonectria ditissima) to enter the tree, ultimately stunting and killing it. In some forest areas mortality of beech has approached 50%; the loss of timber value and food for wildlife (beechnuts) become significant. The disease also poses a threat to ornamental beech trees. Because the white woolly wax coating that the scale insect secretes over itself is visible on beech trees now, BBD has been chosen as the MISC December Invader of the Month.

The first sign that BBD is present is the scale’s white wooly wax coating. This will occur on the trunk and limbs of the tree in scattered groups that will later become large strips as the scale population builds. Spread of BBD begins with the wind pushing wingless scale larvae, tiny yellow soft-bodied insects, onto beech trees. The larvae then insert their stylets (elongated sucking mouthparts) into the bark and feed by sucking sap. The larvae will molt twice, becoming adult females in the spring. In midsummer, the female scales reproduce asexually by laying eggs and then dying. The eggs hatch late summer to early winter, producing wingless larvae.

Sometime after trees are infested by the scale, Nectria fungal spores are wind deposited onto wounds created by the scale. Once the fungi invade the tree, they kill the inner bark and can rot the outer wood, girdling the tree, and killing it.

The distribution of BBD is from Pennsylvania north to Nova Scotia, with isolated infestations in Michigan, Tennessee, North Carolina, Virginia, West Virginia and Maryland. BBD can potentially affect beech trees wherever they grow.

BBD was occurring in Europe before 1849. It was thought that the scale was the cause of death until 1914 when the fungus was found to be involved. Sometime in the late 1900’s, the scale was introduced to Nova Scotia. By the early 1930’s mature Beech trees were dying from the effects of the scale and fungus in Canada and Maine.

There are few control options for BBD. Ornamental beeches can be sprayed with insecticides (consult an arborist about them) to stop the scale. There is no practical control method for a forest setting. Salvage cutting is the only way to reduce timber losses. Some trees have been proven resistant to the scale, providing a possibility that resistance levels may be increased in beech trees for the future.

Adapted from Invasive Species of Concern-Invader of the Month December 2, 2008, Steven A. Tilley, Maryland Department of Agriculture, Forest Pest Management