How to Identify Poison Ivy 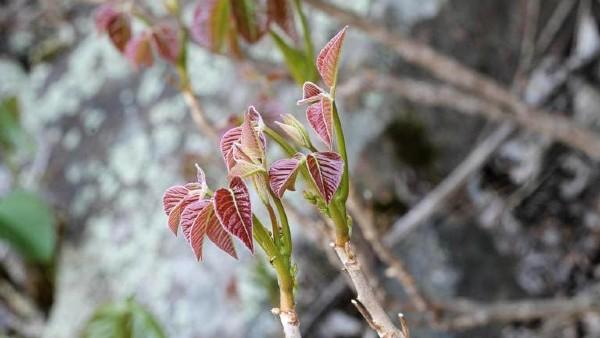 Along the main stem/vine, the sets of three leaflets are never directly opposite to each other; they have an alternate arrangement. The veins of each leaflet are generally alternate along the main vein. In the photo below, one can see an old hairy poison ivy vine as well as a younger vine without hairs.

What is NOT poison ivy

Above are boxelder seedlings, which can look very much like poison ivy with compound leaves with three leaflets. However, notice the leaflets are arranged on the stem opposite from each other, not alternately like poison ivy.

Indian strawberry has serrated leaflet edges. The edges of poison ivy can be somewhat jagged but are not serrated.

Brambles (blackberries, raspberries) have prickles on the stems, which poison ivy never has. The leaflet edges also have finer serrations than poison ivy.

Clematis leaf veins are more curved than poison ivy and the leaves are opposite along the main stem.

Bean upper surfaces tend to be very slightly fuzzy. Poison ivy upper surface is never fuzzy and has a slightly waxy appearance. Note the difference in venation in bean and poison ivy. Beans have fewer veins from the main central vein.

Can you identify poison ivy? Take the poison ivy quiz.