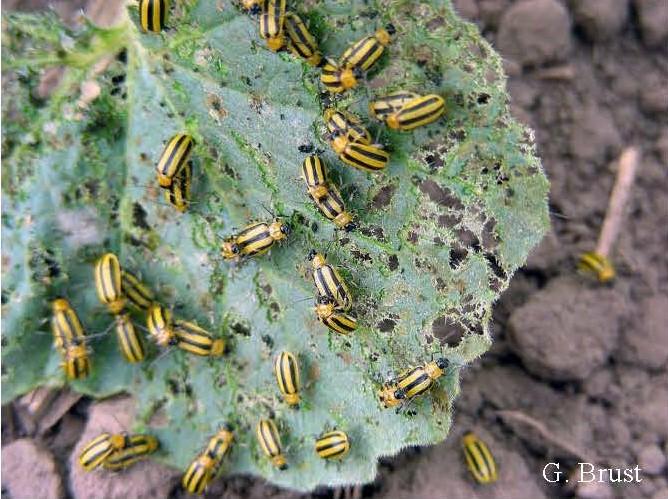 There have been problems in our vegetable fields with three pests, which include striped cucumber beetles, leafhoppers and twospotted spider mites. I think most of the problems we are having with these three comes from our mild winter as each has had an outbreak population after a mild winter sometime in the last 12 years.

So far this has been a particularly bad year for striped cucumber beetles in squash, cucumber and watermelon, and when they are up pumpkins. Some fields have been hit particularly hard with beetles causing 5-12% plant loss due just to their feeding. The cool wet May we had slowed the emergence of the beetles from their overwintering sites. When you combine the delayed emergence of the beetles with the slow planting schedule of squash and cucumber because of the wet weather you end up with a massive movement of beetles into some fields as soon as there are any cucurbit plants available. The beetles tend to mass on small plants where they eat, mate and defecate (fig 1). This type of frenzied activity where there are many beetles feeding on a few leaves or on a small plant leads to increased chances of bacterial wilt infection. The bacterium that causes bacterial wilt in cucurbits, Erwinia tracheiphila, is in the cucumber beetle’s feces. As the beetles defecate on the leaves where they are feeding the bacteria move into the open (feeding) wounds with the help of water that is in the form of precipitation or dew. The more beetles that are feeding and opening wounds on susceptible crops like cucumber, cantaloupe and squash the greater the chance of bacterial wilt infection. In a few small cucumber fields I saw as much as 30% of the plants with bacterial wilt. One additional problem with these pests and why control sprays have not worked as well as they should have under some conditions is that the beetles are consistently hiding at the base of the plant (in the plastic hole) where they are feeding on the stem. Sprayers are set up usually to cover the leaf canopy and often do not do a very good job of putting chemical down in the plant hole. This stem feeding can be severe enough to cause some wilting. It is hard enough to control cucumber beetles with a good cover spray, but when only small amounts of spray are reaching them down in the plastic hole they will not be controlled.

The second outbreak pest has been potato leaf hopper. When looking on the underside of leaf-scorched leaves (fig 2), I found many potato leafhopper Empoasca fabae nymphs (but no adults) (fig 3). Potato leafhoppers prefer warm, dry conditions and are commonplace in southern states where they overwinter; leafhoppers do not overwinter in our area, but the more mild the winter the better able they can overwinter close to us. PLH are generally first seen in late April or early May, but are arriving on average 7-10 days earlier in our area than just 20-30 years ago. Females lay 2-4 eggs per day in the leaf stems or veins of plants. In 7 to 10 days nymphs emerge. Nymphs undergo five instars and reach maturity in about 2 weeks. The newly emerged nymph is nearly colorless with red spots that fade. Nymphs then become yellow, finally changing to pale green in the third and later instars. There are 3-4 generations each summer. Leafhoppers are capable of very rapid population increases so scouting is important to control the pest to avoid damage to crops. Alfalfa and a few other forage legumes are the primary hosts for the potato leafhopper and once the first cutting of the forage is done, PLH will move into other susceptible crops such as potato, raspberries and hops.

Damage: The most obvious symptom of potato leafhopper feeding is hopper burn. Hopper burn is the yellowing of the leaf margin (fig 2). This damage is followed by leaf curling and necrosis. Hopper burn occurs because potato leafhoppers feed by sucking the juices out of leaf veins and blocking the veins with a toxin in their saliva. Once hopper-burn is seen the plant has been damaged.

Monitoring and Management: Because potato leafhoppers can have very rapid population surges, it is important to scout and control them before major damage can occur. While there is no agreed upon threshold for leafhoppers in several of our crops such as eggplant, raspberry or hops, most recommendations have a threshold at 2-3 PLH per leaf. Fields should be scouted weekly by checking the undersides of 5-10 leaves per 10–20 plants. If the average number of leafhoppers per leaf is at or above the threshold, then a control is needed. Because hops are a newer crop in our area states may differ in what they allow to be used, so be sure to check the label to see what your state will allow to be used on hops for PLH control. In general, neonicotinoids, pyrethroids, or spinosyns could be used. Organic growers could use spinosad or pyrethrins that are OMRI approved for potato leafhopper management. If PLH are more of a consistent problem for you one suggestion is to plant red clover in drive rows (do not mow) as potato leafhoppers prefer to feed on the red clover than most of our vegetables.

The third pest problem is twospotted spider mites (TSSM) Tetranychus urticae. Even in May after all that rain there were reports of mite infestations on a few crops which included hops, yes not a good year so far for hops. Spider mites overwinter as adults in the soil or leaf litter, although they may remain somewhat active in high tunnels through the winter. The light yellowish eggs are pearl-like in appearance and are attached to the undersides of leaves or stems (fig 4). The most difficult thing to accomplish for good TSSM control is getting adequate spray coverage. Many of the spray applications do a good job of covering the top of the leaves, but do a poor job of reaching the underside of the leaves. Good coverage is essential. One grower used a leaf blower-like back pack sprayer and applied two sprays of 1% (by volume) horticultural oil 7-10 days apart. He got excellent spray coverage on the underside of his leaves and consequently excellent control of the mites that were present. By using two applications about one week apart it was possible to control not only the adults and nymphs, but the eggs as well. Oil is a good management tactic to use at this time of year as plants are small. An added benefit of the oil is that it is rather inexpensive. Using oils now also will greatly reduce any development of mite resistance to other chemicals over the course of the season. If miticides are needed Kanemite, Acramite and Portal are all excellent miticides.