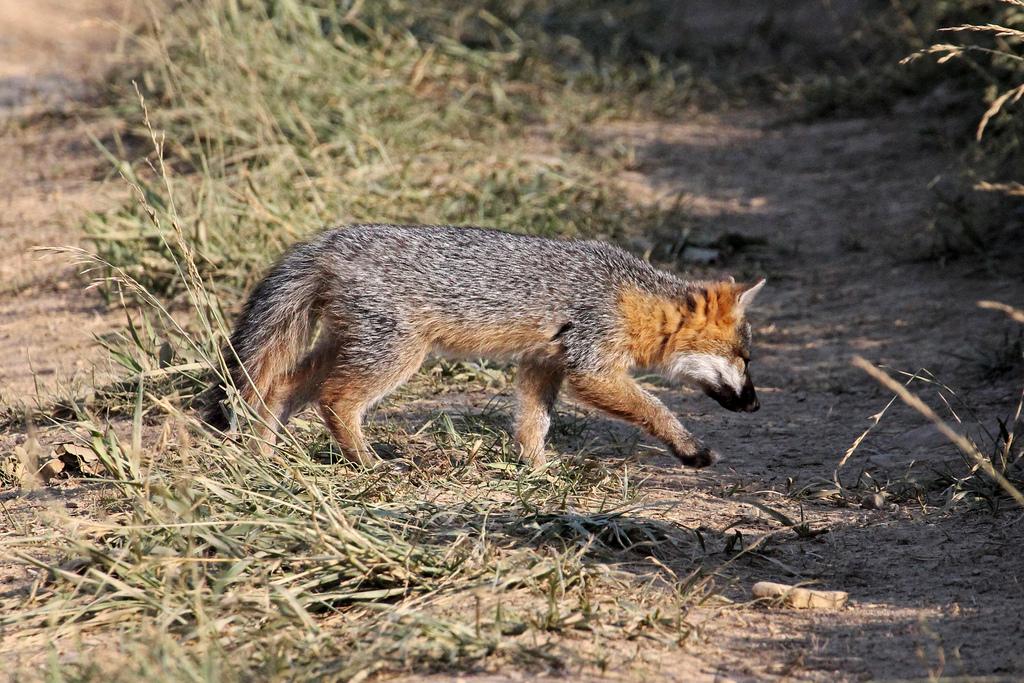 When most people hear the term “fox,” they think of the red fox, which we profiled in the Winter 2021 issue of Branching Out. Indeed, most depictions of foxes in literature and media depict a red fox. The red fox is so ubiquitous, as well as so connected to English colonial history through hunting, it comes as a surprise to many that Maryland is home to a second species of fox. However, the gray fox is indeed native to the state and the region, and can be found throughout most of North America. In fact, this successful species can also be found throughout Central and northern South America as well.

The gray fox (Urocyon cinereoargenteus) and its more well-known cousin share some similar traits. Both are omnivores, eating small prey such as rabbits, shrews, moles, and birds, plus fruits, nuts, and certain herbaceous plants. Both have bushy tails. But here these two members of the dog family diverge. The gray fox has shorter legs than the red. Its coat is a coarse mix of gray on the back, reddish-brown on the sides, chest, belly, and legs. The tail has a black stripe running the length of it and a black tip.

Additionally, the gray fox prefers deciduous forests for its habitat, preferring areas with dense cover for protection and with water nearby. It has retractable claws that enable it to climb trees, making it one of only three dog species worldwide with this ability. The fox will leap into lower branches or shinny up a trunk, using its back legs to push and its front legs to grasp the bark. It will jump from one branch to another to hunt birds and squirrels, and to consume fruit, particularly in the springtime when berries become a large part of its diet. Leaving a tree is the reverse order as it descends head-first.

The gray fox is mostly nocturnal, although it has been observed during daylight hours on occasion (they have been observed sunning themselves in trees). They will create dens in tree cavities, in hollow logs, in brush piles, or under or among rocks. These behaviors help account for its infrequent observations by humans.

For gray foxes, the winter is an important time. Solitary during most of the year, males and females will socialize only during the breeding season, which in Maryland occurs from January through March, generally 2 to 4 weeks later than the red fox.  During this time, gray foxes may use a series of sharp barks or yips to call to or attract a mate. Unlike its noisier red cousins which have a variety of famous calls, the otherwise quiet gray fox relies on powerful scent glands to mark territory and attract a potential mate.

Gray foxes mate for life, and they will create bedding inside their den consisting of, among other things, the fur and feathers of its prey. Females will

give birth in these dens to a litter of on average two to five pups about two months after mating. Both parents provide for the newborns, which are blind and covered in black fur. Males will provide most of the food scraps after they are weaned at three to six weeks of age. The male will also teach the young how to hunt. The young will stay with the female until the fall, at which point they will venture out on their own. Gray fox territories are usually two to four miles in size, and they have been known to aggressively ward off red foxes where their habitats overlap.

The mature gray fox has few natural predators. Juveniles may fall victim to bobcats, coyotes, and great horned owls, but humans seem to have the most impact on the species. Threats include habitat loss due to woodland fragmentation, degradation, and conversion to agricultural uses for farming, or to urban uses such as housing. According to canids.org, gray foxes are frequently captured by mistake when other more highly-desired furbearing species such as bobcats are targeted. The gray fox’s coarse coat makes it less desirable than other mammals for fur trapping purposes, but the species is managed by the state of Maryland for that reason.