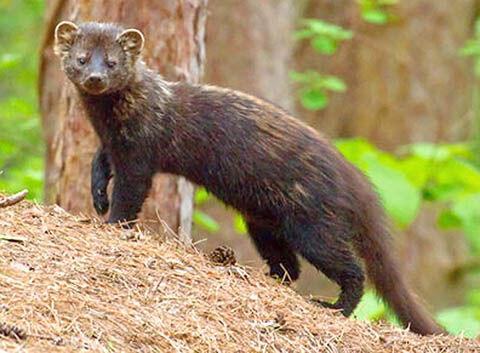 Maryland is home to four members of the weasel family: mink, river otters, long-tailed weasels, and fishers. In the state, fishers are second only in size to river otters, but they occupy a distinctly different ecological niche. Of these four species, the fisher is perhaps the most elusive, due in part to its mostly nocturnal behavior, but once you have seen one, you won’t confuse it with another species.

The fisher is actually a rather misunderstood species. When Europeans first observed this native North American species, it’s possible that they believed it was related to the European polecat and gave it a similar name. (That was not uncommon; the American bison is popularly known as a “buffalo” because it resembled European buffaloes, but they are not scientifically related.) Although it’s not known for sure, it’s possible that the newly-observed species was called a “fitch” or “fiche,” which has origins in both the Dutch and French terms for “polecat,” and which over the years became “fisher cat” and, now, “fisher.”

It’s not a stretch of the imagination to surmise why “cat” was added to the name. The face of the fisher resembles some felines, and the overall size is not much different than many housecats. But the fisher is not a feline but a member of the mustelid family, which across the continent also includes badgers, wolverines and others.

But do fishers eat fish, as the name suggests? Generally no, as they are primarily carnivorous predators of small mammals such as squirrels, mice, and shrews, as well as frogs, birds, nuts, and fruit. The fisher is also one of the few predators that can successfully prey on porcupines. Instead of living near water as the name suggests, fishers prefer large tracts of coniferous or mixed hardwood-softwood forests that contain large trees. They can climb trees to hunt prey and their long and slender bodies allow them to fit into holes and burrows.

Another source of misinformation is the fisher’s vocalizations. An internet search for phrases such as “fisher cat screams” yield a variety of shrieks. There are also claims that such sounds mean a fisher is about to attack its prey. However, experts believe that the noises humans hear are actually foxes (as documented in our Winter 2021 Branching Out). In fact, while fishers do make a variety of sounds, such as growls and hisses, they are generally silent predators.

Like many mammals, fishers are active year round, and like many North American woodland-dwelling species, their numbers were severely affected by habitat loss during the 18th and 19th centuries. They were also hunted for their fur. Their numbers have rebounded in many areas in the eastern parts of the continent as former farmlands have returned to woodland and existing woodlands have been protected. Fishers are now found throughout most of Canada, the northeastern U.S. as far south as Virginia and West Virginia, the northern midwest U.S. from the Great Lakes to Montana, as well as in some areas of the Northern Rockies and the Sierra Nevada mountains,

where numbers are fewer. In some cases, such as in Maryland, fishers were re-introduced to their former range; they can now can be found much of the western part of the state where wide expanses of dense overstories provide fishers with rich hunting grounds and large trees for denning. The Maryland DNR categorizes their comeback as “tremendous.”

The fall is an important time for fishers. After spending the majority of the year alone, males and females mate in early spring (March to May) but the young are not born until 51 weeks later. The female will den in a hollow tree well above the ground and will give birth to 2-4 young in late February through March. The male plays no role in nurturing; the female will care for the young exclusively. Once summer arrives and the young are about four months old, the female teaches them how to hunt, and by fall they can venture off on their own in search of their own territory.

Locally, fishers have been sighted along the C&O Canal (see photo above), and reports in Frederick County lead some to believe that fishers may also be living in Cunningham Falls State Park and nearby Catoctin Mountain Park. The National Park Service is currently collecting to confirm their presence in the park. NPS biologist Becky Loncosky told the Frederick News-Post, “It’s exciting to know there’s something there that you haven’t heard of or maybe even seen...they could be here and we just don’t even know it.”