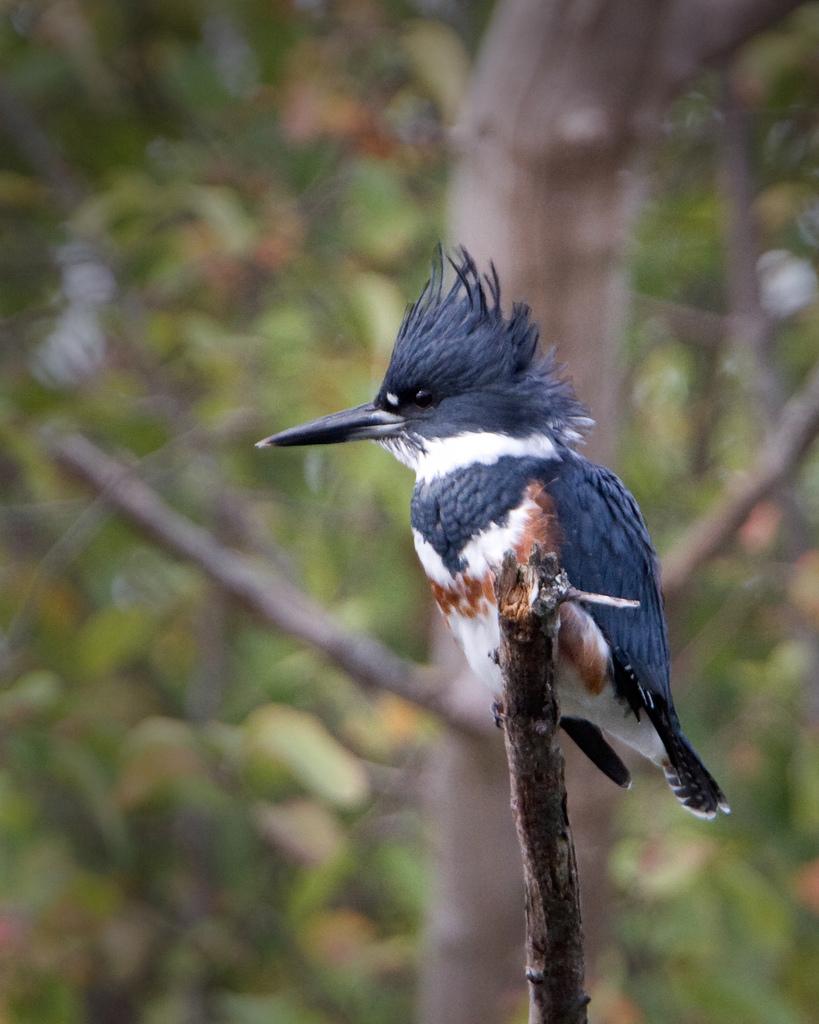 Maryland’s geography features a wide variety of water resources. Where the topography varies enough so that gentle or steep banks rise above the rivers, streams, ponds, lakes, and estuaries, and where trees are found along the water’s edge, you may find one of the state’s most fascinating birds: the belted kingfisher. A year-round resident, this colorful hunter lives throughout Maryland.

The belted kingfisher is aptly named. Both male and female have a band of slate-blue feathers on a white chest to go with similarly-colored heads and backs. Unlike many bird species, the females are more brightly colored, with an additional chestnut-colored band on the chest.

Water enthusiasts, such as boaters and anglers, often hear the belted kingfisher before seeing one. They may see the birds perching above the water, or flying along the water, with two or three wing strokes followed by a glide. if they are lucky, they will catch one diving after their prey. One patient photographer in Great Britain spent a year getting to know a population of green kingfishers, resulting in a series of amazing high-speed photographs that reveal the species’ special skills.

When it comes to the “fishing” part, the belted kingfisher is aptly named. Unlike other birds that hunt aquatic prey with their talons, such as bald eagles or osprey, or that hunt by wading and stealth, such as egrets or herons, belted kingfishers will dive beak-first from a perch above the water. Their diet in Maryland consists of a variety of small fish species, including sticklebacks, mummichogs, stonerollers and juvenile trout. They will also eat crayfish, mollusks, aquatic insects, and small amphibians.

The belted kingfisher lives in Maryland year round, taking advantage of bodies of water that remain open during the winter months. During that time — in fact, during the majority of the year — the kingfisher is a solitary bird. They only pair up during the breeding season, which is between April and July, depending on the location. During courtship, the male will defend a territory along a stream from other males, and will court a single female by bringing fish to and feeding her. The pair will select a steep or vertical bank alongside the water for a nest, and both will excavate a long (3-6 feet) tunnel with a nesting chamber at the end. The tunnel usually slopes upwards from the entrance to allow water to drain.

The female lays a clutch of six to seven eggs on average, which both the male and female will incubate. The female usually sits on the clutch during the night and the male during the day. The eggs hatch after roughly three weeks, and both parents will take turns hunting, feeding the young first partially digested fish and finally whole fish. The young leave the nest a month after hatching and are fed for another three weeks before striking out on their own.

Once they are independent, belted kingfishers are subject to a variety of prey, such as hawks, mammals and snakes. Additional population pressures come from human development along bodies of water. On the other hand, some kingfishers have adapted to human activities by adopting sand and gravel pits as nesting grounds, if the exposed slopes are soft enough for excavation. Others will take advantage of telephone wires across streams or near water, or poles in or alongside the water for perching and observation.

For more information on the belted kingfisher: