Pruning Trees in the Home Landscape 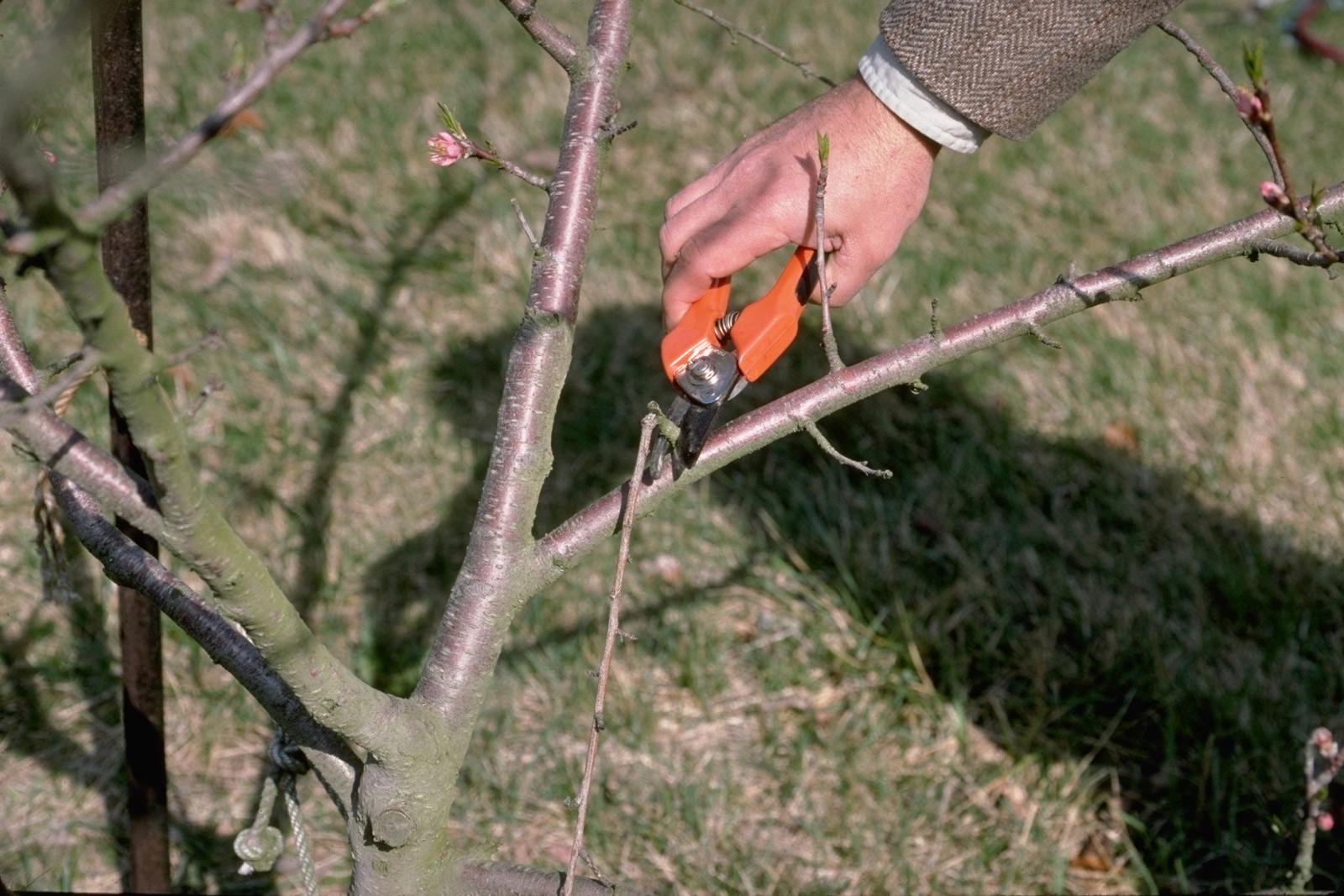 Pruning, or the selective removal of specific branches or stems, is an important maintenance practice that helps to keep your trees healthy for many years to come.

Young trees can be pruned to prevent future branch structure issues or, if needed, to create a desired shape or form.

Young trees frequently need pruning to establish a beneficial branch structure. At first, however, newly planted trees should be pruned only when there are broken or damaged branches. It is a myth that trees should be pruned when planted to compensate for root loss, because leaves and shoot tips provide food and growth substances that stimulate root production.

Never remove more than one-fourth of a tree’s branches at one time. Remember: it is better to make several small pruning cuts than one big cut. Avoid cutting large branches when possible.

Maintain a single dominant leader stem, which is the tallest, strongest, main branch of the tree. Do not prune back this leader or allow secondary branches to outgrow the leader. If a tree has co-dominant stems (known as double leaders), remove one to avoid structural weakness. Save the straightest and strongest stem. Prevent competing branches from growing larger than half the trunk diameter by removing them or bending them downward to slow their growth.

Proper pruning leaves secondary branches all along the larger branches. It is better to remove branches from the edges of the tree.

The angle formed between two branches is called the crotch. Sometimes branches develop with narrow angles of attachment, that is, with tight crotches. As the tree grows, the bark becomes enclosed within the crotch, which leads to weakness and branch failure or dieback. Branches with narrow crotches should be removed or stretched to a wider angle when the tree is young. To widen crotches, use spacers, sometimes called spreaders, or simply bend the branch to a wider angle while it is still young and supple. Spreaders can be made of wire or wood and are positioned in a crotch, pushing it wider. Weights, also, can be tied to branches to widen the crotch angle. The spreaders or weights should be removed after a season. The spreading and spacing of branches is an old established practice for fruit trees that can be applied to any tree.

If properly pruned when young, mature trees seldom need major pruning. These three techniques illustrated below can be used by tree experts when necessary. Tree work that requires climbing or near overhead power lines should be performed by a trained tree-care professional.

The selective removal of branches to increase light penetration and air movement in the crown, or canopy, of a tree.

Thinning reduces wind damage by diminishing the degree of wind block. No more than one-fourth of the living crown should be removed at any one time. Removing a portion of a branch causes the terminal portion of the remaining branch to become dominant. This remaining dominant branch should be strongly attached. Therefore, when thinning it is best to cut to a side branch that is at least one-third the size of the one being cut. Branches smaller than that will not be joined as strongly and be more susceptible to breakage. When cutting back a branch to one of its lateral branches, remove no more than one-fourth of its foliage.

The removal of lower branches.

Afterward, at least two-thirds of the total height of the tree must still have living branches. Crown raising is frequently done to allow foot or vehicle traffic or lawnmowers under the tree. Street trees require at least 16 feet of clearance for trucks. Lawn trees need eight feet of clearance for foot traffic. Trees used for screening or windbreak can be allowed to have branches near the ground.

The proper removal of upper branches when the tree has become too tall.

When a tree is too tall, it is better to remove it. Never top (removing large branches or/and trunks from treetops, leaving stubs, and not making proper pruning cuts) a shade tree to control its size. Topping causes the growth of many weak suckers that may break off when they become heavy branches causing a possibly hazardous situation. Wood rots are more likely to be a problem in topped trees. If a tree must be reduced in size, use the crown reduction pruning entire branches at their point of origin.
Tipping is the procedure of cutting lateral branches between nodes or buds to reduce crown width rather than cutting back to a node or crotch. It is another procedure that should not be used.

Never cut the branch flush with the trunk, thus removing the branch collar. The collar is an area of natural shedding that contains chemically protective tissue that encourages rapid sealing off of the wound left behind after pruning.

Tree wound dressing, paint, or shellac should not be applied over the cut surfaces.  Research shows that dressings can shelter disease organisms and slow the wound-healing process (compartmentalization).

Removing branches over 1½ inches in diameter requires a special three-cut pruning process (see illustration below). This avoids the misfortunate event when, before the pruning cut is even complete, the weight of the branch breaks it off, leaving a ragged wound and ripping bark from the trunk. 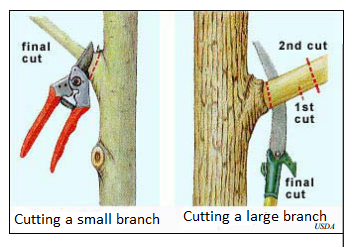 Plant larger conifers such as fir, spruce, and pine only in areas where heavy pruning will not be necessary, since new shoots will not develop from cuts made in the older wood.  Conifers do not need pruning for spacing of lateral branches. Branches emerge close to each other but will not crowd out each other or the leader. Appropriate vertical spacing occurs naturally.

Firs and spruces may only be lightly pruned in late summer, fall, or winter after growth is completed. Leave the side buds present along the twigs. Never cut the central leader.

Pines may be lightly pruned in early June to increase density by removing the bud plus an inch or so of the young shoots. If large cuts are made, new branches will arise only in the area where needles are present along the stem. To thicken the growth of conifer trees such as pine, fir, or spruce pinch out half the candle, which is the new spring growth, when it is about two inches long. Use fingers rather than shears.  (refer to the illustration below)

Tree-Topping … The Cost is Greater Than You Think | PennState Extension