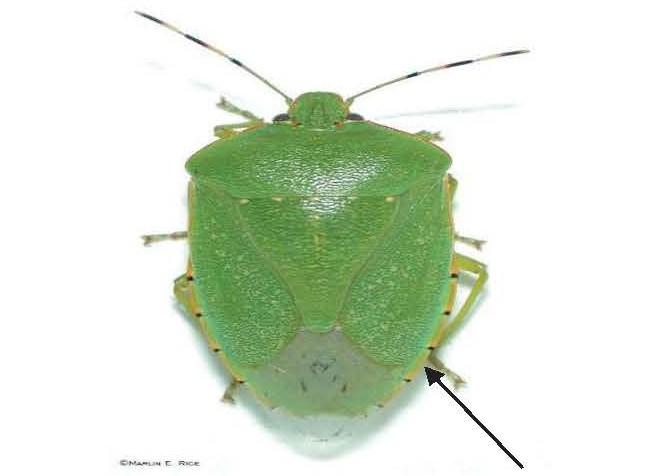 Description and Life History: All adult stink bugs are shield shaped. Phytophagus: Green and southern green stink bugs are light green and measure ½” to ¾” long. The green stink bug is bordered by a narrow, orange-yellow line around most of its body (Fig. 1 above). Brown stink bugs are dull brownish-yellow in color and about ½” long (Fig. 2 below). The Brown Marmorated stinkbug is a newly introduced pest to the Mid-Atlantic area and can be distinguished from other brown stink bugs by their lighter bands on the antennae and darker bands on the overlapping part at the rear of the front pair of wings (Fig 3). They also have patches of coppery or bluish-metallic colored small rounded depressions on the head and shoulders. Stink bugs overwinter as adults and become active in spring when temperatures rise above 70 degrees F. Nymphs develop through five instars that resemble adults but are smaller and oval. The first instars aggregate by the empty eggs and do not feed. They are first instars for three days at the end of which they molt. Feeding begins with the second instar. Green stink bug nymphs are usually black to brown when small, but as they mature, they become green with orange, black and pink markings (Fig. 8). The immatures of the brown and southern green stink bug (SGSB) are light green, but the southern green stink bug nymphs, have a series of white spots along their backs. Stink bug females lay their barrel-shaped eggs in groups of 30-125 usually on the undersides of foliage (Fig. 9). Green stink bug eggs are yellow to green, later turning pink to gray. The eggs of the southern green stink bug are light tan, more cylindrical than barrel-shaped and often have a reddish pink tint before hatching. Brown stink bug eggs are white, more of a kettle-shape, and slightly smaller than those of the green stink bug. The incubation time for the eggs is five to seven days in the summer and two to three weeks in early spring and late fall. Stink bugs generally reach high population levels in late August through September and early October in the mid-Atlantic. While only one generation per year is thought to occur in the mid-Atlantic region, with the warming climate we may start to see two generations in the southern parts of Maryland and in Virginia.

Predatory stink bugs: Adult spined soldier bugs are light brown to tan and are ¼ to ½” long with prominent pointed shoulders immediately behind the head (Fig. 5). These points angle out to the side and not forward. Some brown stink bug pest species may 2007 look similar but the most common spined soldier bug in the mid-Atlantic (P. maculiventris) has a distinctive dark line on the tip of each forewing that forms one dark streak when the wing tips overlap (wings are folded over the body). Two-spotted stink bugs are usually black with yellow, orange or red and a black "Y" surrounded by red or orange on their back. Adults also have two black oval areas on their shoulders (Fig. 6). Rough or tree stink bugs are often found in fruit trees and other trees although at times can be found in soybean or less often in vegetable fields. Adult tree stink bugs are brown and seem heavily sclerotized compared with brown or marmorated stink bugs. They also have teeth along their front shoulders unlike brown or marmorated (Fig 7). Young spined soldier bug and two spotted stink bug nymphs are round instead of shield-like and are red and black. As they grow, they become marked with yellow-orange, black and cream spots and stripes. Nymphs are wingless but disperse in search of prey after the first instar. Eggs are deposited in tight clusters of 20-30 on leaves and twigs. They are gray to black or cream to gold colored and are barrel-shaped. Spined soldier bugs have eggs with spines resembling a crown around the top of the egg (Fig 10). There may be two to three generations per year.

Distribution – Phytophagous: Brown and green stink bugs are found as far north as Quebec and as far west as California, however, they tend to cause more damage in the southern United States. The southern green stink bug occurs from Texas to the southern mid-Atlantic area northward to Virginia. The SGSB is a very important pest in the Gulf Coast states. In Maryland and most of the mid-Atlantic the green stink bug is the principal species encountered in vegetable and soybean fields. Predatory: The spined soldier bug is the most common predatory stinkbug in Maryland and the mid-Atlantic and is found commonly north of Mexico throughout North America. Both of the other species also are found throughout North America.

Hosts: Phytophagous: Stink bugs prefer to feed on the developing seed of many hosts including trees, shrubs, vines, weeds and many cultivated crops. They may also feed on the stems and foliage when seed are not present. The preferred hosts are nearly all uncultivated plants. Weeds that are favored by stink bugs include legumes, wild blackberries, Russian thistle, mustards, little mallow, beggerweed, rattlebox, and nutsedge. Stink bugs build up on the weedy hosts and move to vegetables and soybeans late in the season as their preferred hosts mature. Predatory: Over 200 species have been reported as prey for these predators. Immature insects are their primary targets. The more important agricultural prey includes the larvae of the diamondback moth, corn earworm, beet armyworm, fall armyworm, cabbage looper, imported cabbageworm, European corn borer, and velvetbean caterpillar. While the Colorado potato beetle and Mexican bean beetle are preyed upon by the spined soldier bug they are not preferred hosts for the nymphs or adults compared to previously mentioned prey species.

Damage: Phytophagous: Nymph and adult stink bugs pierce plants with their needlelike mouthparts that consist of a long beak-like structure called the rostrum and suck sap from pods, buds, blossoms and seeds. Salivary fluid is pumped down the salivary duct and liquefied food is pumped up the food canal. The degree of damage depends, to some extent, on the developmental stage of the plant and when it is pierced by stink bugs. Damage in vegetables can result in immature fruit and pods becoming deformed as they develop. Attacked shoots usually wither, or in extreme cases may die. Specifically in tomato stink bug feeding causes cloudy spot (Fig. 11). The insect removes sap from the fruit which is replaced with air. These air pockets are soft and spongy and appear white when the fruit is green and yellow as the fruit turns red (Fig 12). In addition to the visual damage caused by stink bug feeding, the mechanical transmission of tomato bacterial spot may also result. Stink bugs also carry yeast and other pathogens that may cause decay when introduced into fruit on the bugs' mouthparts. A few fields have been significantly damaged by yeast introduced by stink bugs; this damage is often scored as "mold" by graders. In beans, seeds are often flattened and shriveled with germination being reduced. The younger the seed when damaged, the greater the yield reduction. Although late season infestations may not affect yield, bean oil content and germination can be reduced.

Scouting and Thresholds: Phytophagous: The eggs and nymphs of stink bugs often suffer high mortality from predators and pathogens. Stink bugs may be controlled with a variety of insecticides once threshold is reached. Unfortunately thresholds for stink bugs in vegetables are not very precise and more work is needed to give best results. However, there are some guidelines to use in tomatoes and peppers. After fruit set, examine 10 fruit per 6-foot section of row for each 2.5 acres. If there is more than one stink bug per six plants, apply insecticide. Another suggested scouting procedure and threshold are to examine 10 tomato fruit at each of 40 randomly selected locations per field (400 fruit); if 3 of 400 fruit are damaged (0.75%) an insecticide application is warranted. Field crops have much more specific action thresholds that should be used to provide the best control. The economic threshold for stink bugs in soybeans is 36 stink bugs per 100 sweeps with a net or 1 stink bug per foot of row starting at R-4. For cowpea (southern pea) 2000 stink bugs per acre would cause economic loss. In cotton a threshold is three to four stink bugs per 100 sweeps with a sweep net. Stink bugs are difficult to control organically with only the first two instars susceptible to organic spray treatments. If populations build in the field there are no organically accepted methods (and few chemical methods) of control.

Biological Control: There is some biological control of stink bugs provided by parasites. In the mid-Atlantic a tachinid fly, Trichopoda pennipes, parasitizes adults and nymphs (Fig. 13) by laying white or pearl-colored oval eggs on the stink bugs body usually on the abdomen (Fig. 14). The wasp, Trissolcus basalis, parasitizes stink bug eggs, with its main host being SGSB. Tachinids are one of the largest parasitoid groups, yet usually go unnoticed. Most look like robust house flies with large dark bristles on the tip of the abdomen (Fig. 15). The greatest percentage of parasitism takes place late in the season, late August through September and therefore biological control usually comes too late to help reduce stink bug damage in most vegetable fields.