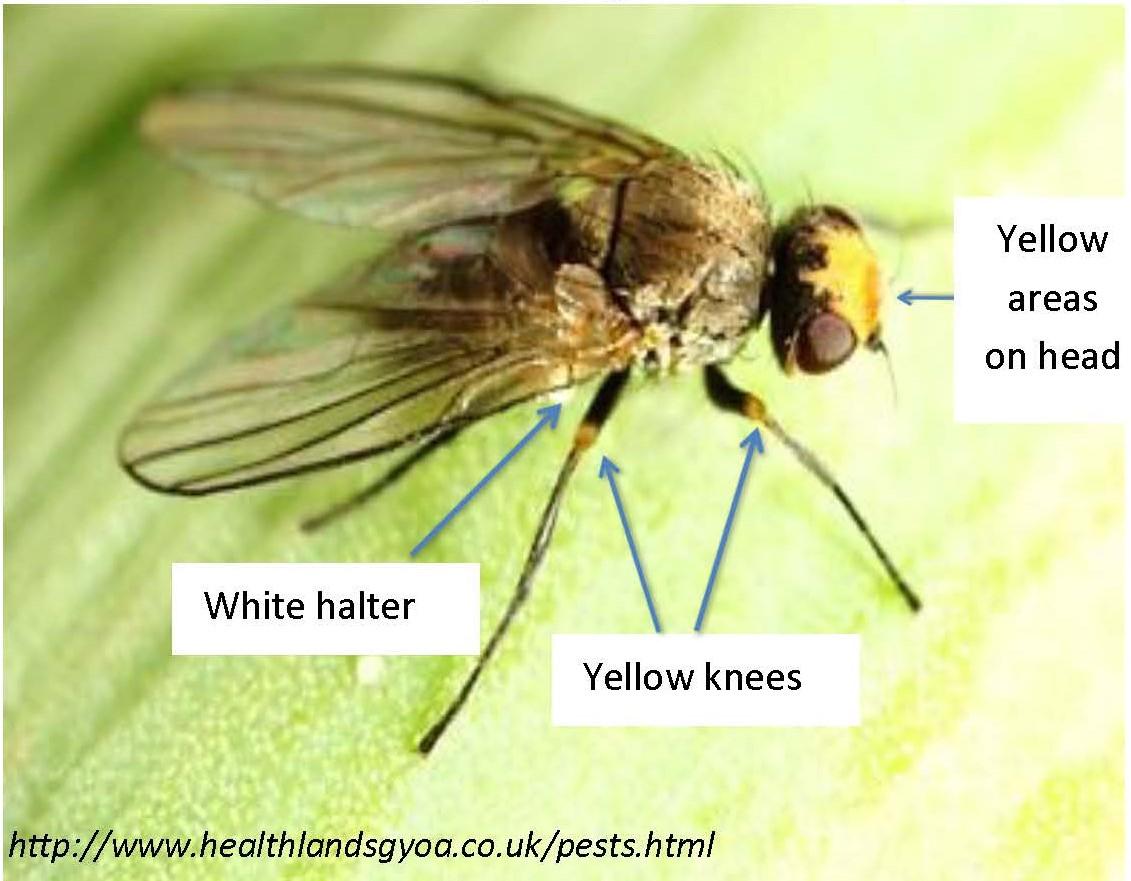 The allium leafminer Phytomyza gymnostoma (also known as the onion leafminer) has recently been detected and confirmed from infested leeks in Lancaster County, PA. This is the first confirmed infestation in the Western Hemisphere.

The allium leafminer has been reported to infest species in the genus Allium. Leeks (A. porrum) tend to be described as the most damaged host, which may be influenced by the timing of the second generation and the planting of leeks. Infestations have also been reported in onion (A. cepa), garlic (A. sativum), chive (A. schoenoprasum), shallot (A. cepa), and green onion (A. fistulosum). There are many ornamental species of Allium, and at least one endangered Allium (A. munzii in California). The full host range is unknown.

Adult females make repeated punctures in leaf tissue with their ovipositor, and both females and males feed on the plant exudates. These punctures may be the first sign of damage. Larvae mine leaves, and move towards and into bulbs and leaf sheathes. Both the leaf punctures and mines serve as entry routes for bacterial and fungal pathogens. High rates of infestation have been reported: from 20 to 100 pupae per plant, and 100% of plants in fields. The literature suggests organic production and market garden production systems tend to be most at risk, perhaps due to insecticidal control in conventional production systems.

Adults: Small (~ 3 mm) long grey or black flies with a distinctive yellow or orange area on the top and front of head . Wings are held horizontally over abdomen when at rest, white halters. Legs have distinctive yellow “knees”. Although adults are fairly distinctive, male genitalia are required to confirm ID.

Larvae: White, cream, or yellowish maggots, headless, up to 8 mm long at their final instar.

Pupa: Dark brown, 3.5 mm long, with a pair of posterior spiracles with 18-20 bulbs per spiracle.

Allium leafminers overwinter as pupae in plant tissue or surrounding soil. Adults emerge in late winter (March) into spring (throughout April, perhaps into May), and lay eggs at the base of plant stems. Larvae mine leaves, and move downward into the base of leaves or into bulbs, where they pupate. Pupae may move into soil. These 1st generation pupae undergo a diapause or aestivation period which lasts throughout White halter Yellow knees Yellow areas on head http://www.healthlandsgyoa.co.uk/pests.html 2 the summer, and develop into adults that emerge in the autumn (September / October). This 2nd generation of adults lay eggs into Allium spp., which develop through the larval and into the pupal stage. These 2nd generation pupae will overwinter. Egg-to-adult development is estimated to require 1,090 degree-days using a 5.1o C threshold, or 1,225 degree-days using a 3.2o C threshold.

Cultural Control: Covering plants in February, prior to the emergence of adults, and keeping plants covered during spring emergence, can be used to exclude the pest. Avoiding the adult oviposition period by delaying planting (after mid-May we think) has also been suggested to reduce infestation rates. Covering fall plantings during the 2nd generation flight can be effective. Growing leeks as far as possible from chives has been suggested. Organic

Synthetic Chemical Control: Systemic and contact insecticides can be effective. EPA registrations vary, however, among Allium crops. Check labels to ensure the crop is listed, and for rates and days-to-harvest intervals. Options that may be effective include cyromazine (Triguard), dinotefuran (Scorpion), spinetoram (Radiant), lambda-cyhalothrin (Warrior II or other formulations), and abamectin (Agri-Mek or other formulations).