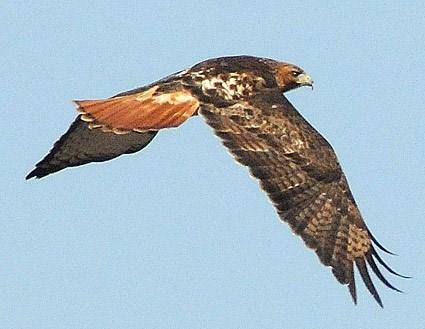 Throughout Maryland’s habitats, you will find one of the most successful raptors in North America: the Red-tailed Hawk. This bird of prey is found as far north as Alaska and as far south as Panama and the West Indies, occupying deserts, grasslands, deciduous and coniferous forests, as well as agricultural and urban areas. Like other raptors, Red-tailed Hawks in northern latitudes may migrate south during winter months. However, those in central or southern latitudes may be permanent residents. For example, the grounds of the US Fish & Wildlife Service’s National Conservation Training Center, just across the Potomac River from Maryland in Shepherdstown WV, is home to an internationally-known bald eagle pair that migrates and returns to a nest every year, but also houses a population of Red-tails that live there year round.

Many people see Red-tails as the birds soar in circles on thermal currents above open fields. They can also be seen perching on trees, fence posts, or telephone poles alongside the road. They are easy to identify as they perch; they have rich brown feathers on their back with a distinctive cinnamon-red tail. Its chest and underwing feathers are paler, with a dark bar from shoulder to wrist that is apparent in flight. Whether soaring or perching, the birds are looking down on the open areas beneath them, keeping an eye out for its prey. In Maryland, the hawks will capture mice, voles, rabbits and ground squirrels, among other animals, providing an important check on rodent populations.

As late winter turns to spring in Maryland, Red-tailed Hawk pairs have finished preparing their stick nests. These are found in trees up to 70 feet above the ground, or on the occasional man-made structure, such as building ledges in urban areas. By April, the female lays a clutch of one to five eggs, which hatch after 28 to 35 days. Clutches of two or three eggs are the most common. The female does the majority of the incubating, while the male hunts and brings food to her. He occasionally spends time on the eggs when she decides to “stretch her wings” and leave the nest for a brief time.

Once hatched, the young are dependent on their parents for food for the next six weeks or so. After about 45 days, they begin to leave the nest, with short flights during the fledgling period, which lasts another three weeks. By the time they reach four months of age, they are capable of capturing their own food and become independent.

They reach full maturity after two years, and generally mate for life, only taking a new mate when the original partner dies. They will occupy the same nesting territory year after year, defending it from juvenile hawks and other birds that compete with them for the same food, such as great horned owls.

These owls begin their nesting behavior in December, earlier than the Red-tails. Because the owls do not construct their own nests, they may take over one vacated by a Red-tail pair. If the Red-tails discover that their nest has been taken over, they will construct a new one in the same territory.

The Red-tailed Hawk’s adaptability has led it to become one of the continent’s most successful birds. According to the North American Breeding Bird Survey, its populations have increased throughout most of its range since the 1960s. Partners in Flight, a cooperative effort among conservation groups at government, international, professional and amateur levels, estimates Red-tails have a global breeding population of 2.3 million birds, with 75% of those spending some part of the year in the United States. Consequently, the species is not considered threatened.

So the next time you take a long drive, keep an eye out for a Red-tail. Chances are it will be the first hawk you see.