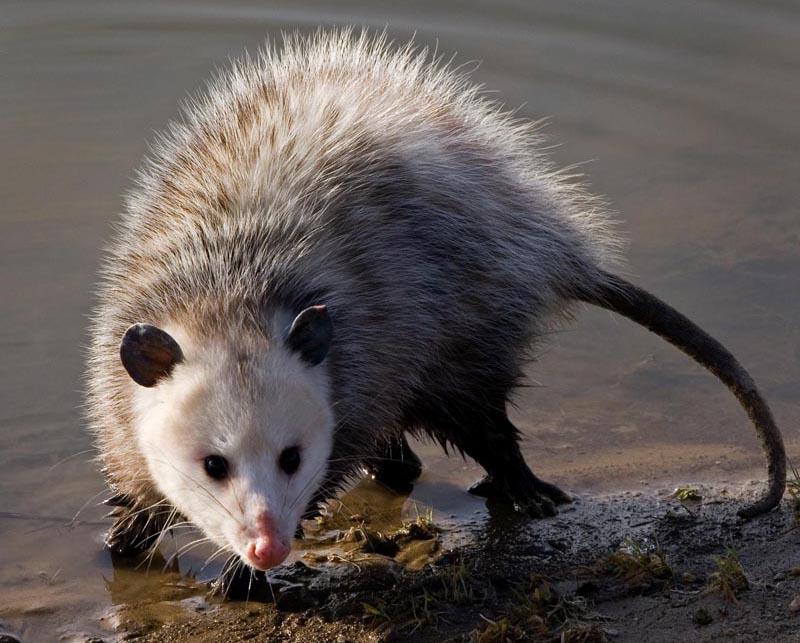 Mention the word “marsupial,” and many individuals will think of kangaroos. But North America is also home to a marsupial—the Virginia opossum. This native and valuable animal is often misunderstood, but recent science has discovered that it plays an important role in the ecology.

Opossums are common throughout Maryland and the eastern United States, and are found in a wide variety of habitats. They naturally prefer deciduous woods near water, but can also be found in farmlands and marshes, where they feed on a varied diet of worms, frogs, crayfish, and birds, as well as fruits and nuts. They also enjoy insects such as cockroaches, beetles, slugs and crickets.

Opossums will also inhabit suburban areas if they find easy access to food sources. These sources include compost piles, garbage cans, and bird feeders. According to Kim Ashby, a wildlife rehabilitator, they will also eat cat and dog food. “If people are feeding cats and dogs outside, they are probably feeding their local opossums as well.”

Because these marsupials will also eat carrion, which is often abundant in high-traffic areas, they can be found alongside roads. Their slow reflexes and poor eyesight contribute to their high mortality in such environments.

The month of July marks the end of the mating season for opossums, which began in January. Females can have one to three litters per year, each averaging 6 to 9 young. Like other marsupials, including kangaroos, the babies are born premature (only 2 weeks after mating) and then continue to develop in the mother’s pouch for 2 to 3 months. After leaving the pouch, the young stay close to their mother, and can sometimes ride on her back as she forages for food.

The large number of young per litter is misleading, as the species has a high mortality rate. Not all newborns make it to the pouch, and of those that do, as many as 20% will die before they are weaned. Fewer than 10% survive the first year of life, and general life expectancy in the wild is only 2 to 3 years.

The opossum’s appearance has also contributed to misunderstandings about its behavior. When cornered, the animal may bare its teeth — it has fifty, the most of any North American mammal — but it is generally docile and will avoid confrontation through the behavior called “playing possum.” The individual will fall over, begin drooling, slow its breathing, and begin to emit a musky odor that to other animals smells like decay. Since most other animals avoid dead food sources, most predators will leave it alone.

Opossums have recently been recognized as an unexpected ally in the fight against Lyme disease. For over 25 years, scientists at the Cary Institute of Ecosystem Studies in Millbrook, NY have been researching Lyme disease in the world’s longest-running study. Understanding the tick-borne disease has led the Cary scientists to also examine the effects that the ticks have on other animals, such as mice, shrews and chipmunks, and opossums. It turns out that opossums are highly-effective groomers. According to Cary senior scientist Rick Ostfield, “more than 95% of the ticks that try to feed on them” get consumed in the grooming process. “So these opossums are walking around the forest floor, hoovering up ticks right and left, killing over 90% of these things, and so they are really protecting our health.”

The scientists’ research also suggests that the opossum’s immune system is fairly effective at fighting off the disease. Other small mammals, whose bloodstreams serve as reservoirs for Lyme disease, will pass on the pathogen as ticks bite them and then bite other animals (including humans). That means that the ticks that survive an opossum’s grooming are less likely to acquire the disease from the opossum’s blood. While the scientists continue to study the data, they believe that an ecosystem that is healthy for opossums can help combat the spread of Lyme disease.

Perhaps these findings will help change perspectives about the opossum, and reduce some of the misunderstandings surrounding this native and highly adaptable marsupial.