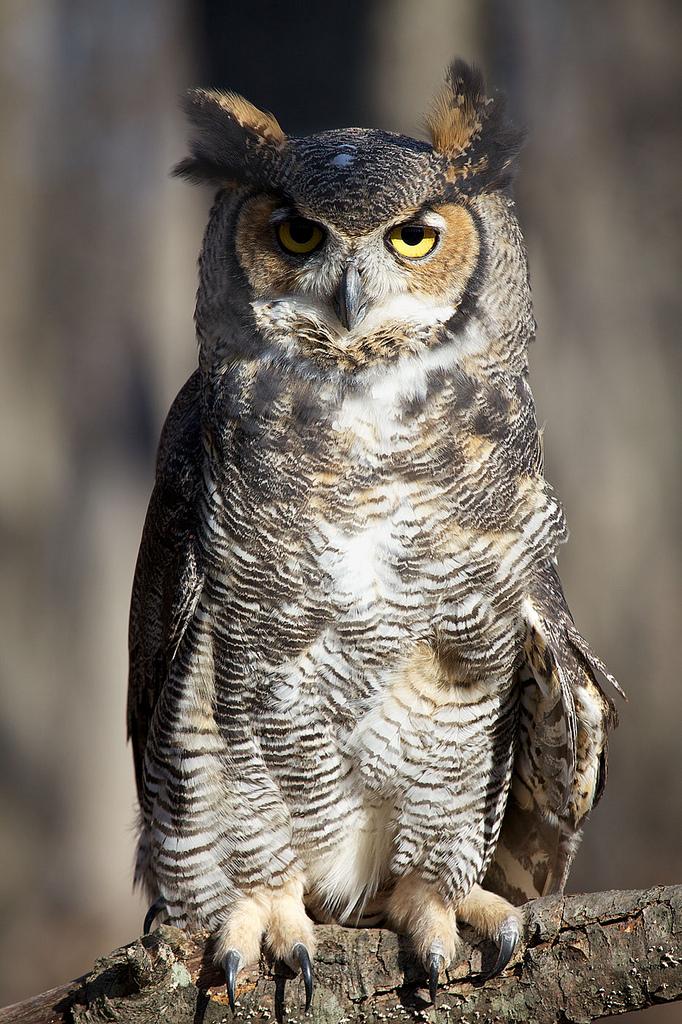 One of the benefits of returning to Standard Time in the late fall is having more daylight in the early morning. An additional benefit is the opportunity to see great horned owls at dusk, as they begin their hours of hunting. Even if you do not see them, you will know they are in your woodlands, as their deep hooting calls can be heard echoing across forests on mid-winter nights.

Great horned owls (Bubo virginianus) get their name from their “plumicorns,” which are tufts of feathers atop the birds’ heads. They are neither horns nor related to the birds’ ears. While scientists are uncertain of the plumicorns’ exact function, it is speculated that the tufts assist in camouflaging the birds in its woodland environments.

Great horned owls are non-migratory birds that have adapted to most ecosystems on this continent. They can be found as far south as Central America and in a variety of subspecies. In the mid-Atlantic states, they can be found from deep woodlands to suburban neighborhoods. They can be found throughout Maryland, from the western forests to eastern swamps. Each owl’s preferred home range usually consists of several hundred acres that includes some open habitat, such as fields, pastures, wetlands, or agricultural fields, as well as woodlands for perching and nesting.

This is the time of year when great horned owls begin to turn towards family matters. Males and females hoot back and forth while courting; although the male is smaller in size than the female, he has a larger voice box and therefore a deeper hoot. Pairs of owls are monogamous, often staying together for years.

In late December through February, a pair will begin to nest. Unlike other birds, they do not build their own. Instead, they may re-use one recently vacated by another large bird, such as a hawk, or decide to nest on a cliff ledge, in a cave, within a tree cavity, or atop a broken snag. They will add little or no materials to them. Some pairs will add shreds of bark or leaves as linings, while others will add nothing except for the occasional lost feather.

The female will lay a clutch of 2-3 eggs that are dull white in color. She provides the majority of the incubation, and the chicks hatch in 28-35 days. Both parents provide food for the young, which can leave the nest and climb on nearby branches by five weeks old and can fly about two months later. In addition, they may be fed and tended by the adults for several months afterwards.

During this time, the nestlings or unattended eggs may fall prey to foxes, raccoons, crows, ravens, and other raptors. Once they reach maturity, they have few natural enemies. Crows and blue jays have been observed harassing sleeping great horned owls, persisting in their noisy attacks until the sleepy owl leaves for a more sheltered roost. The owls will defend their territory from intruders with vigorous hooting, as well as bill-clapping, hisses, and screams, especially in the fall, when their young leave the area, and in the winter before laying their eggs.

An adult great horned owl has a widely varied diet and is known as an opportunistic hunter. It is a prolific consumer of rodents (such as rats and mice), rabbits and squirrels. They may also prey on opossums, skunks, snakes, lizards, frogs, and insects, as well as the occasional bird. Like many owls, they will observe an area from a high perch, and then pursue the prey in flight, crossing open land and water in pursuit. They prefer to hunt after dark, but will pursue prey during the day. They catch their prey in their powerful talons, and will consume the meal in place if the area is safe, or may fly away with the prey to another, safer location.

Although the great horned owl is still considered common in many North American environments, some researchers report a decline in populations due to habitat loss, as well as through encounters with vehicles and fences.