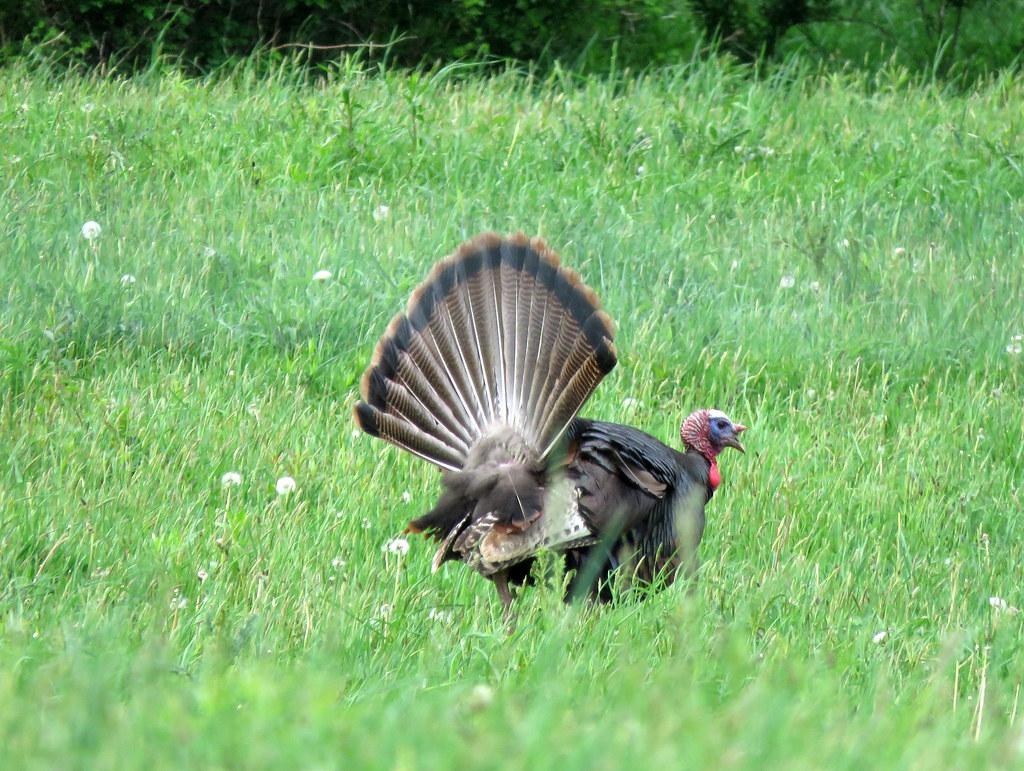 Perhaps spotlighting the Eastern wild turkey is a bit on the nose for a fall newsletter, but it is important to recognize that the species performs a year-round role in the woodlands of Maryland and the mid-Atlantic, beyond the obvious connections to Thanksgiving Day meals.

The Eastern wild turkey is certainly part of North American history. It provided nutrition for the original inhabitants for centuries before the arrival of Europeans. While turkeys were not specifically mentioned as part of the famous 1621 Pilgrims’ feast, it is possible that they were. Additionally, although the story that Benjamin Franklin advocated for the turkey to be the national symbol of the fledgling United States is a myth, he definitely felt it was a noble bird.

Unlike many other birds, the turkey requires different habitats during its lifespan. It requires both wooded areas for roosting and for food for the adults of the flock, as well as more open areas, such as fields or edge habitats, for nesting and food sources for the young (called poults). Consequently, many conservation groups advocate for a mix of habitats for individuals or land managers wishing to create suitable turkey habitat. However, the species is highly adaptable, and some flocks have colonized suburban lawns and backyard woods for their own, leading some to experience the birds for the first time beyond a grocery store freezer in November.

Because the turkey does not migrate, they may be found across Maryland year round. As summer yields to fall, the birds may gather into large flocks of up to 100 individuals to find suitable habitat for the winter. With the coming of spring, the large flocks will fragment into groups of 10 to 30. Breeding season begins in March and lasts until May. Males perform elaborate courtship rituals, gobbling, dragging their wing tips on the ground, and displaying their fan-shaped tail feathers as they strut around the females and to assert their dominance over other males. The female lays her eggs in a nest that is generally nothing more elaborate than a depression in the ground. However, the surrounding area is usually densely vegetated to hide the female and the eggs from predators. The clutch is usually 9-12 eggs, laid one at a time and one per day. The eggs are incubated for approximately a month and will all hatch at once.

Soon the poults will leave the nest with the female for open areas, which provide the insects that form their diet for the first few weeks of their life. Over half of the poults fail to reach maturity, falling victim to predators or to cold, wet weather before they are able to fly into trees for escape and for roosting. As they mature, their diet expands to include acorns, nuts, leaves, seeds, and fruit. They scratch the ground with their feet to uncover their food, and typically forage for two to three hours after dawn and before dusk.

When confronted by predators or when surprised by humans, individuals and flocks generally run away, but the turkey can fly, and with great speed - up to 50 miles an hour for short distances. They have excellent eyesight and hearing, which are up to five times greater than humans.

Adult turkeys can fall victim to bobcats, raccoons, eagles and owls. Other birds, mammals, and snakes often consume turkey eggs. But humans are by far the birds’ largest predators. A combination of habitat loss through land clearing and hunting resulted in turkeys disappearing from all of Maryland, except for some scattered populations in western counties.

A reintroduction program by the Department of Natural Resources and partner organizations began in 1979 and restored the species to Maryland. These efforts, along with habitat management efforts by interested property owners, have resulted in a healthy turkey population across the state. Consequently, the state DNR has established hunting seasons in both spring and fall to help manage the species.