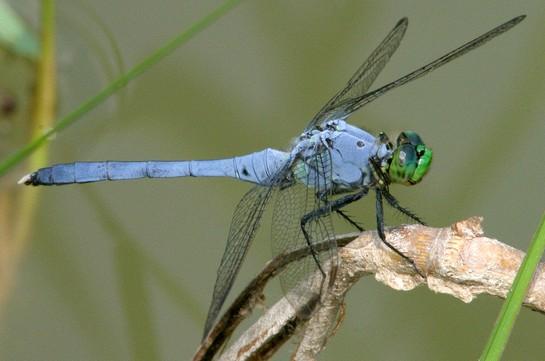 One of the iconic scenes of summer involves watching dragonflies zooming to and fro, basking in the sun, hovering over water, and alighting momentarily on a plant stalk before flying off again. This insect is one of the most ancient on earth, with fossil records stretching back as much as 350 million years. Those insects had wingspans of up to 35 inches; today’s species rarely exceed 10 inches. But they are one of the world’s most successful species, with representatives on every continent except Antarctica. Approximately 300 species are known in the United States.

All of these populations share characteristics of wing and body shape, while coloration varies around the world. Dragonflies in general have a long, slim abdomen behind a thicker thorax which bears the two pairs of wings. (One of the ways you can distinguish dragonflies from damselflies is by the wings; dragonflies hold their wings perpendicular to their bodies at all times, while damselflies sweep theirs back against their abdomen.) They have six legs, although they are rarely used for walking. The large head has a pair of compound eyes that enable the insect to look in all directions, except for directly behind it.

As with many insects, the dragonfly’s life cycle begins in water. Females lay their eggs in muddy or wet areas. The nymphs hatch in about three weeks and will live in the water for up to two years, depending on the species. When it is time for the dragonfly to metamorphose into an adult, it climbs from the water, usually in the dark, anchors to a plant stalk or similar surface, and then breaks from its larval skin. It stretches its wings to dry them, and if the day is warm enough, it will immediately take flight.

Dragonflies find food in two ways: flying and perching. The fliers (as the name suggests) fly in search of prey; perchers act much as flycatching birds do, observing their environment before hunting. Their diet consists of flying insects, including mosquitos, making them a truly beneficial insect from a human perspective. This behavior has led to the dragonfly earning the nickname “mosquito hawk.”

Specific dragonflies also have the common name “pondhawk.” For example, the eastern (or common) pondhawk is native to the eastern two-thirds of the US as well as southern Quebec and Ontario.

It prefers ponds and still waters, perching on vegetation while waiting for prey. You can also find them along sunny, vegetated shorelines and in nearby meadows. Adult males are light blue, while adult females are bright green with black and white markings. Juvenile males emerge with the green coloration, which transitions to blue as they mature. The species has one of the longest flight seasons of North American dragonflies, hunting from May through October.

Property owners who are challenged by other flying insects may find dragonflies to be useful companions in their struggles. Creating a dragonfly pond with suitable vegetation can help existing populations maintain and grow their numbers. According to Craig Tufts, chief naturalist for the National Wildlife Federation, the ideal dragonfly pond should vary in depth, with shallow edges and at least two feet deep in the center. “Deep water offers nymphs a refuge from raccoons and other predators. Varied depths are also important to accommodate a variety of water plants.” Let grass and bushes grow up around the margin, to provide perching sites for the adults. Additional dragonfly-friendly actions include supporting healthy riparian areas and buffers.

There is a wealth of information about dragonflies available on the World Wide Web. The Dragonfly Website provides articles, photos and links to other organizations worldwide.