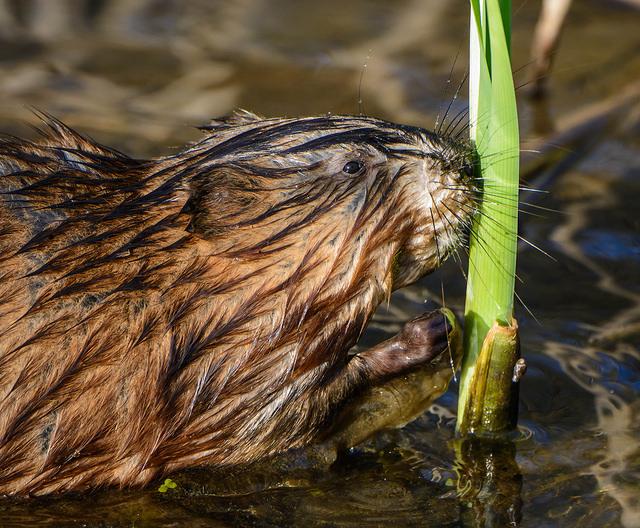 Maryland’s geography features a wide variety of aquatic ecosystems, including the Chesapeake Bay, the Potomac River, and hundreds of lakes, ponds, swamps, marshes and smaller rivers and streams. If your property includes any of these habitats, it may be home to one of North America’s native rodents: the common muskrat.

The muskrat, despite the name, is not a rat, but the other part of its name is apt. The adults emit a strong, musky odor that they use to communicate with each other through territorial markings. They are similar in appearance to the native beaver and to the introduced (and invasive) nutria, which also favor aquatic habitats. All three are good swimmers and primarily herbivores. But the muskrat is smaller than beaver and nutria. It weighs up to 4 pounds and is generally about 20 inches in length, including the elongated tail, which is flattened on the sides for use as a rudder when swimming.

The muskrat excels at swimming. It has thick, glossy fur that varies in color from blackish to silvery-brown that keeps the animal warm in the water. Its ears are small and nearly hidden within the fur. Its partially-webbed back feet propel it above and under the water. Individuals have been observed swimming underwater for as long as fifteen minutes, surfacing for three seconds, and then submerging for another ten minutes. This adaptation comes in handy when escaping pressures from predators such as raccoons, owls, hawks, and other raptors. However, one of its primary predators, the mink, is also a skillful swimmer and is more agile than the muskrat on land.

The rodent’s diet is mostly marsh plants, especially cattails and rushes. Their behavior helps keep bodies of water open for other aquatic species and birds. They often construct platforms in marshes where they can eat food they have collected.

In marshy areas, they will construct dome-shaped lodges from leaves, stems, roots and mud that are 2 to 4 feet tall, with one or more underwater entrances. In other areas, such as alongside streams, they may burrow into banks to create a den. These structures will serve as protection from predators and as nurseries.

Muskrats are prolific breeders and can have up to three litters of 5-7 kits each year. The first litter is born early in the spring after a 30-day gestation. The young can swim after about ten days and can eat plants after three weeks. After one month, the young are now independent and are forced out of the lodge to find new territory.

The muskrat is mostly nocturnal, although they may be observed swimming or sunning on a log during the day. Because of its wide-ranging habitat, you can observe them literally from coast to coast. To learn more about muskrats in Maryland, visit the Chesapeake Bay Program, the Maryland Department of Natural Resources, and the Maryland Biodiversity Project