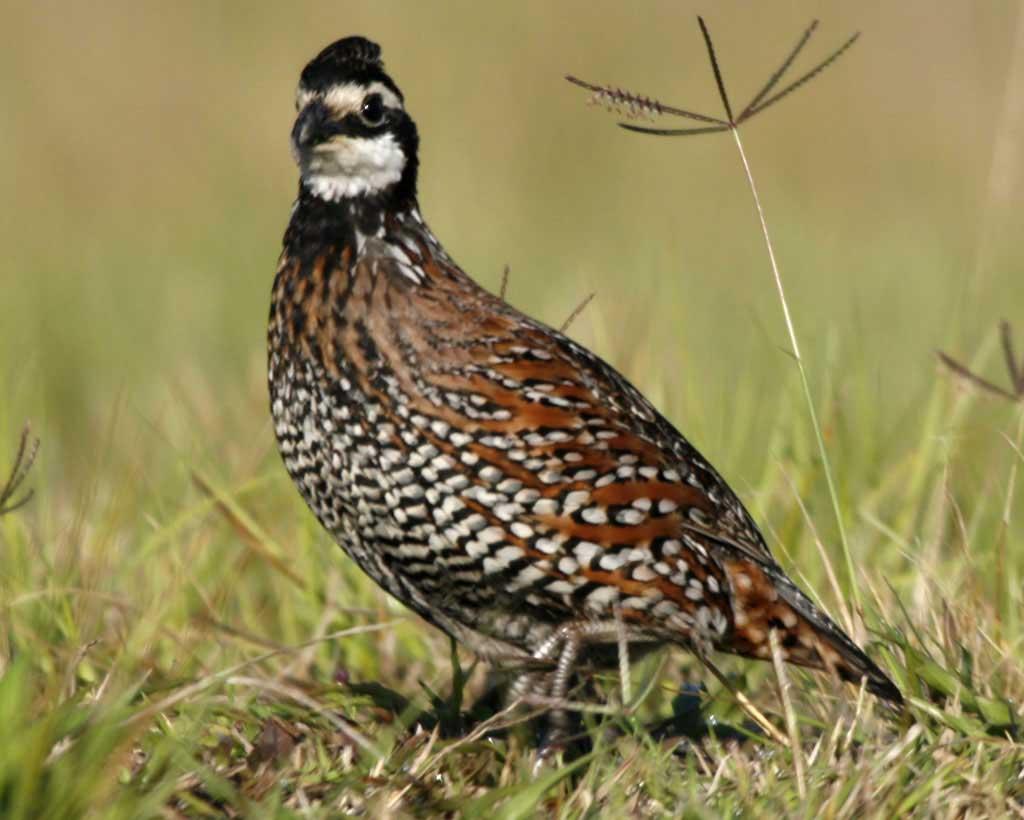 Many have heard the bobwhite quail without ever seeing it. While the bird itself is often difficult to observe, the bird’s emphatic whistle calls out “bob-white” across grassy fields or piney woods. Also known as the northern bobwhite or the Virginia quail, this bird has been in sharp decline over the last fifty years, leading the International Union for Conservation of Nature and Natural Resources to list the species as “near threatened.” Today several dedicated groups are working to reverse this trend.

The bobwhite quail is a small but distinctive species native to much of North America, including the eastern coast of Mexico and  the islands of the Caribbean. In Maryland, they are common throughout the year in the eastern counties and less common west of the Chesapeake Bay. The bobwhite is a small bird, ranging from 9 to 11 inches in length and 13 to 15 inches in wingspan, weighing from 6 to 9 ounces each. While there are regional variations in appearance among males across its range,  the females are similar in all locations. Females are generally dull brown with a buff-colored throat, while males have a white throat and a distinctive brow stripe with a black border. Eastern bobwhites may have rufous-colored breast feathers.

Groups of bobwhites, called “coveys,” will scurry rather than fly between areas of cover, but will take flight for short distances when alarmed. Coveys forage for food in habitat with dense low cover by scratching and pecking through leaf litter. Their diet includes seeds, leaves, buds, berries, acorns, roots, and insects, spiders, and snails. They will eat insects when they are plentiful during the summer, and during the fall begin to make a transition to a diet that is more based on vegetation as insects die off.  When snow falls, the quail will seek out patches of bare ground under brushy areas.

September marks the end of the bobwhite quail mating season that begins in May. Scientists had believed that the species was monogamous until recent investigations with radio-collared birds revealed that both male and female bobwhites can have multiple mates in one season. When a pair chooses to nest, both will work together to scrape a depression in the ground, roughly two inches deep and six inches across, which they then line with grass and other dead vegetation. They often weave grasses and weeds into an arch to completely hide the nest. The process takes up to five days.

A clutch consists of usually 12-16 white to pale buff eggs, and both sexes participate in the incubation, which takes about three weeks. The downy young will leave the nest shortly after hatching and can feed themselves almost immediately. The parents watch over the young and may exhibit distraction behavior if the young are threatened, such as feigning injury to draw the predator’s attention to the adult. The chicks can make short flights at 1-2 weeks of age, but will not be fully grown for several more weeks.

Each female can lay up to three clutches of eggs a year. This prolific behavior is designed to maintain the species’ population in compensation for the adults’ short life span; the oldest known bobwhite lived only six years. But even these numbers have not been enough to maintain the overall population numbers. Its decline is due in large part to man-made changes.

As human populations shift and grow, open grasslands and farms are converted to other uses or become mature woodlands, reducing suitable habitat for the bobwhite. Consequently, the bird’s population has declined in eastern North America as much as 4% per year between 1966 and 2014. However, as this bird has been traditionally seen as a game species, it has been well-studied, and scientists and managers are working to restore populations through habitat changes.

For example, the National Bobwhite Conservation Initiative works with the US Fish & Wildlife Service, the USDA Forest Service, and many other state, local, federal and private organizations to help landowners identify, restore and preserve suitable bobwhite habitat. In Maryland, the Department of Natural Resources and the University of Maryland Extension both provide resources for landowners. Understanding the bobwhite quail’s particular habitat needs and adopting effective land management practices may help improve the species’ prospects.