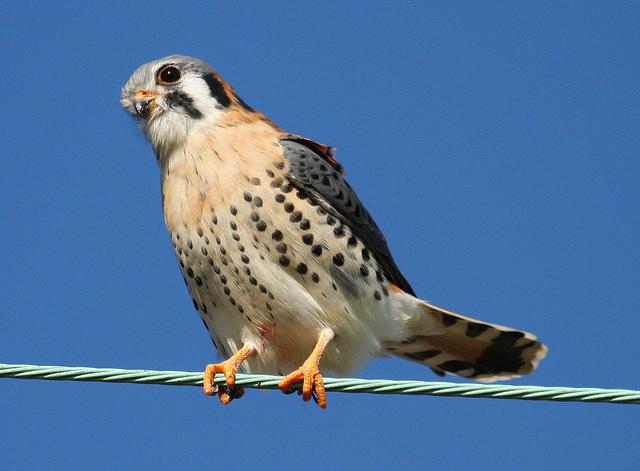 Maryland is home to many types of birds of prey. While hawks and owls are relatively well-known, the state is also home to at least three types of falcons: the Peregrine, the Merlin, and the American Kestrel. The American Kestrel is actually Maryland’s most common falcon as well as the most common in North America, with resident populations throughout most of the United States.

Like other falcons, the kestrel has long, pointed wings and an elongated tail. Both are designed for speed and maneuverability, and enable the bird to virtually hover. They will fly into the wind and will occasionally or vigorously flap its wings to stay in position over one piece of ground, in order to look for small rodents, insects, invertebrates, and other birds. Although they prefer to capture and kill their prey on the ground, they can dive on their prey from greater heights and take smaller birds on the wing; this has given rise to the kestrel also being called the “sparrow hawk.” Their rapid calls have also led to the nickname “killy hawk.”

Compared with other raptors, falcons are smaller than most hawks and many owls. The kestrel is in fact the smallest falcon found in North America, about the size of a mourning dove. They are most often seen along roadsides, as they perch on telephone wires to look for prey in the open areas and edge habitats below. (One way to distinguish the kestrel from other birds seen on wires is that the kestrel has a distinctive habit of pumping its tail while perched.) This has also enabled the species to adapt to a variety of human habitats, such as parks and suburbs.

Kestrels are cavity-nesters, meaning they do not build nests, but prefer enclosed areas for their nesting. Unlike other cavity-nesters, such as woodpeckers, they do not create their own cavities, preferring snags with openings either previously– or naturally-created. They will take over cavities once occupied by woodpeckers, other birds, or animals such as squirrels. They may also take advantage of nooks in buildings, and will also use manmade nesting boxes. In some environments, famers have encouraged kestrels to raise their families on their property to take advantage of the birds’ rodent control activities.

In Maryland, kestrel nesting begins in late March and continues through late August. The birds are solitary during most of the year, but will seek out their mate come spring. Kestrels appear to be monogamous, mating with the same partner each year. The female will lay a clutch of three to five white eggs with small brown spots and will incubate them for about thirty days. During this time, the male hunts and brings her food. The young leave the nest about a month after hatching, but will remain in the area while they learn to fly under the instruction of their parents.

Because of their small size, kestrels are hunted by other birds, including hawks and owls. They can also fall victim to snakes while on the ground, after killing and while consuming their prey. Consequently, generally fewer than half of young kestrels make it through their first year.

Predator pressure is not the only factor affecting kestrel numbers in the state. The rapid urbanization of the corridor from Washington, DC to Baltimore has greatly reduced habitat for wide varieties of animal species, as well as reduced the number of dead or dying trees with cavities. These are two factors that led to its designation as a Species of Greatest Conservation Need in the 2015 Maryland State Wildlife Action Plan. The Maryland DNR, The Maryland Bird Conservation Partnership, and the Calvert County Natural Resources Division have created the “Maryland Farmland Raptor Program,” a citizen science program to help the kestrel and the barn owl (which has the same conservation designation).