Weevils on Trees and Shrubs 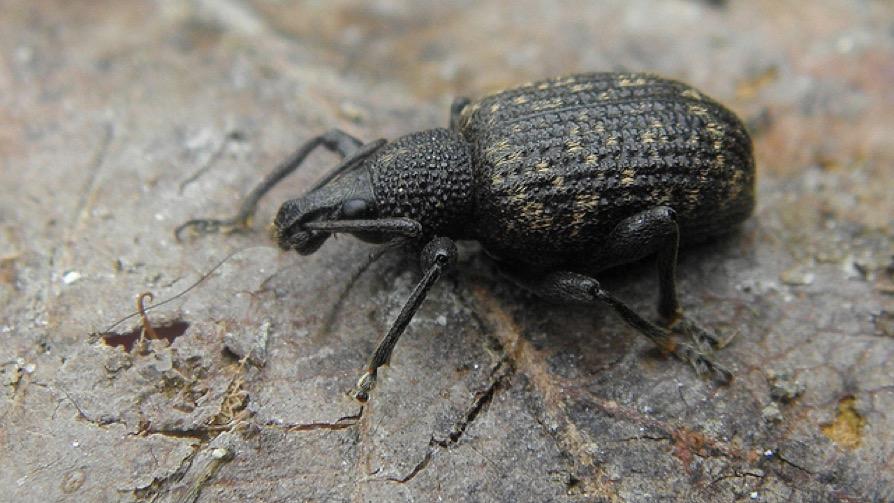 Grubs resume feeding and produce the greatest amount of root damage in the spring. (A small percentage of adults may overwinter and begin feeding and egg laying much earlier. Therefore, grubs of two different sizes are sometimes found in the soil at the same time.) By late May, grubs have transformed into a resting stage called the pupa. Adults emerge from the soil about two weeks later. 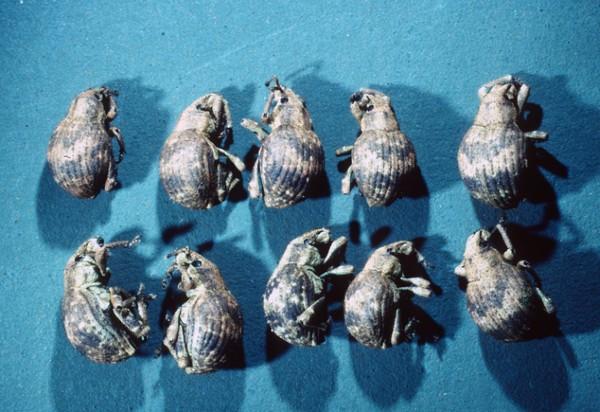 The two-banded Japanese weevil is about 1/4 inch long with a rounded abdomen and short snout. They are frequently overlooked because their brown subdued coloration allows them to blend in with the vegetation. Two mottled bands are distinguishable across the back. Adults are active during the daytime and can be found in branch crotches or clinging to twigs and foliage. They deposit eggs in inconspicuous folds of leaf fragments, primarily in litter around the base of the host plant.

Most of the adult damage occurs close to the ground, usually on new and inner foliage. Defoliation becomes more evident by late summer as the growth rate of the plant slows down and the effect of continuous adult feeding accumulates. Heavily infested plants may suffer complete defoliation. 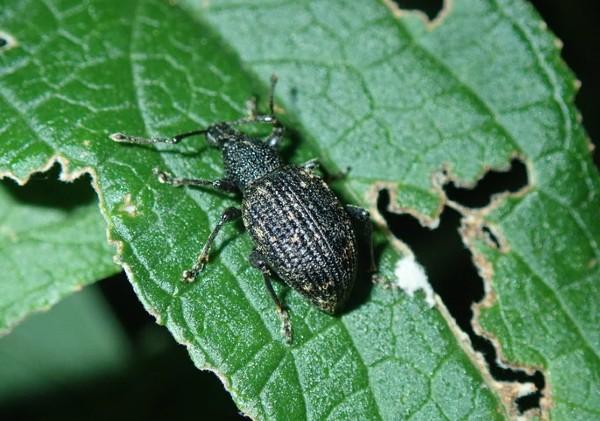 Black vine weevils are about 3/4 inch long, oval and dull black in color. (See photo at top of page.) Adults feed only at night, hiding in debris and loose soil under plants during the day. They seem to prefer feeding on rhododendron, hemlock, and yew (or Taxus), hence the nickname 'Taxus Weevil'. Adult feeding may detract from the appearance of the plant but usually does not cause significant injury.

With the onset of egg laying, adult wandering increases. Eggs usually drop to the ground as the adult feeds. Serious damage results when numerous grubs feed on roots. Young plants can be killed by just a few grubs, while mature plants can tolerate a high grub population with little or no visible effect -- yet often die when transplanted.

Control adults when leaf notching is abundant on new growth. Depending on local conditions, this could be from late May to mid-June. A registered insecticide may be used according to label directions.