Invasives in Your Woodland: Tree-of-Heaven (Ailanthus) 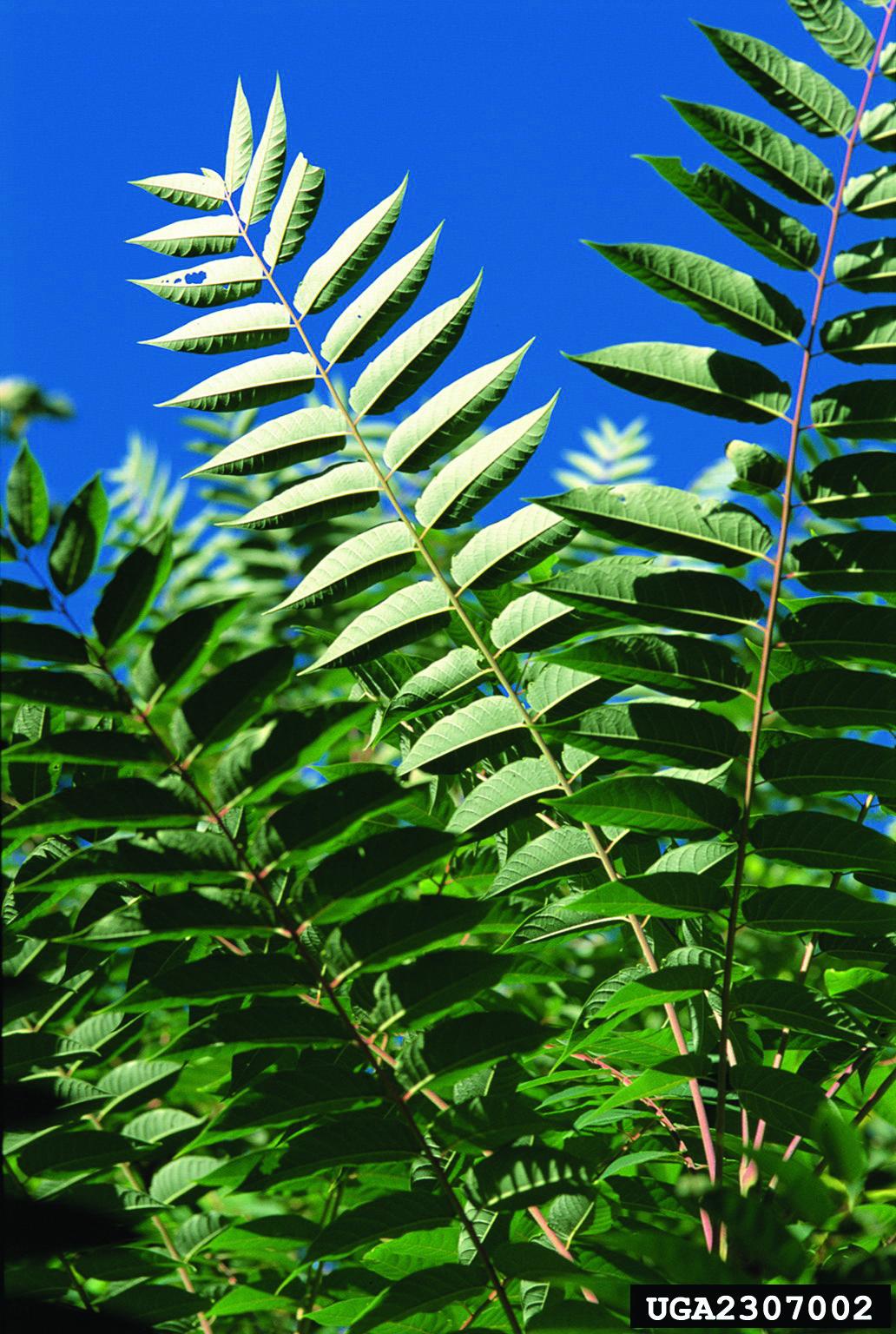 Tree-of-heaven has been receiving a significant amount of attention lately, and not just because it is a fast-spreading invader of woodlands throughout the mid-Atlantic states and beyond. It is currently found in at least one area in almost every state in the U.S., with its greatest density in the middle lattitudes from the Atlantic Ocean to the Mississippi River.(See the distribution map below.) In the mid-Atlantic, it is reported in every county in West Virginia and Delaware; in almost every city and county in Virginia; and in all but 16 northern counties in Pennsylvania. In Maryland, it is found everywhere except for the counties along the eastern shore of the Chesapeake Bay, and Harford and St. Mary’s counties. 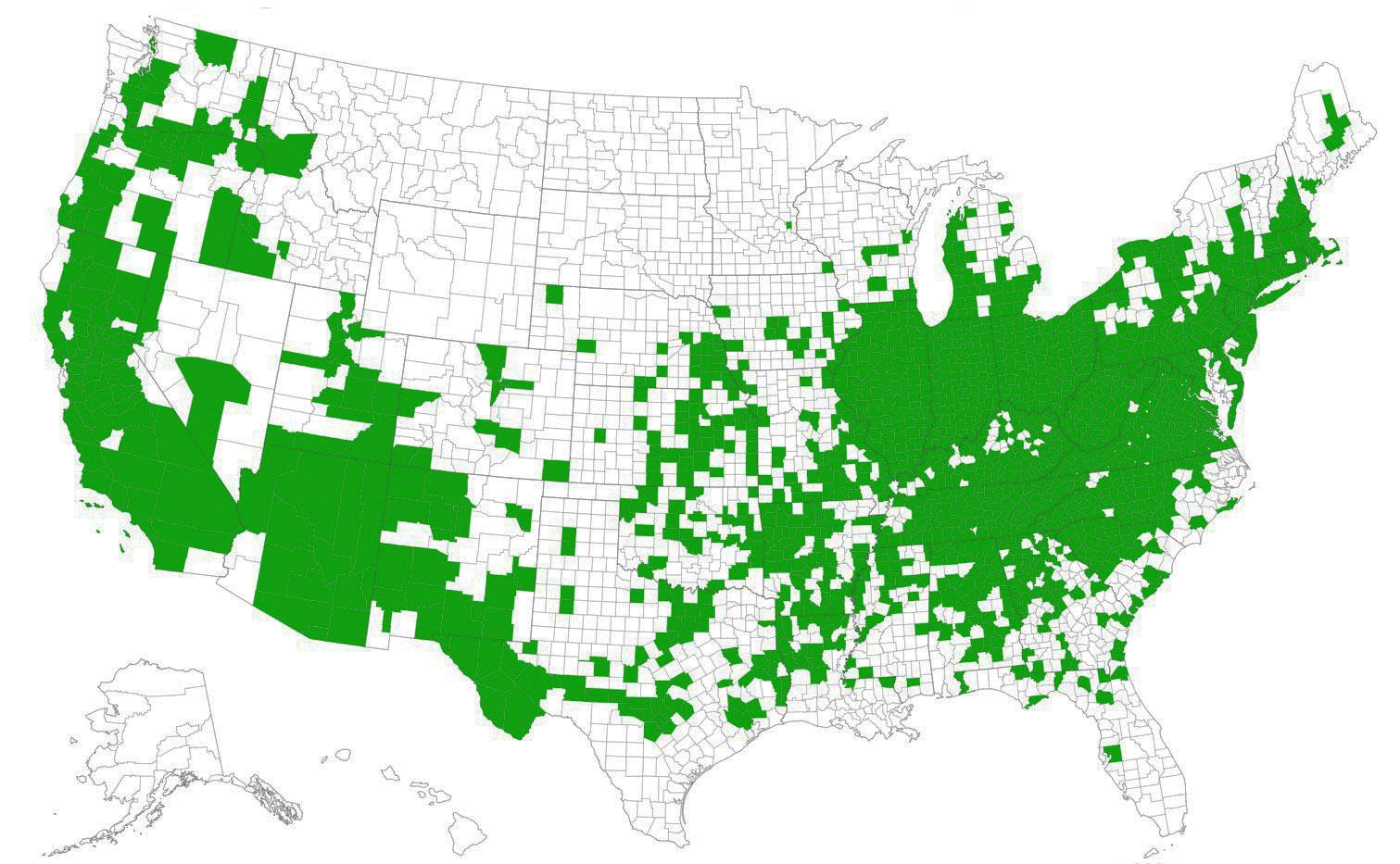 Both forestry and invasive plant species specialists have advocated for the control and removal of tree-of-heaven for many years, but the recent discovery of a new invasive insect in Pennsylvania, and its subsequent spread into adjoining areas, has lent new voice to advocates for the plant’s removal.

The insect, Spotted Lanternfly, is a recent arrival from Asia. The insect has discovered a variety of native North American tree species on which to feed, but researchers have discovered that tree-of-heaven is the insect’s preferred host. This has led to an increased movement to remove tree-of-heaven from the landscape.

For property owners with tree-of-heaven in their woodlands, it is important to understand the plant’s origins and ways that it can be controlled. This is essential not just for the health of the woodlands, but to help curb the spread of Spotted Lanternfly.

Tree-of-heaven (Ailanthus altissima) arrived in the United States from China in the late 1700s. Known variably as Chinese sumac or varnish tree, its strong, offensive smell also leads to the nickname “stinking sumac.” Its fast-growing characteristics made it particularly popular as an urban street and shade tree, and it was widely planted throughout the mid-Atlantic states because it tolerates a wide range of site conditions, including areas with poor soil. This is one of the reasons why it is so successful; from these first plantings, it escaped into natural areas across the region. It crowds out native species with its dense thickets and secretes a chemical into the soil that is toxic to the surrounding plants. While it does not tolerate shade, it can quickly colonize open, disturbed areas such as woodland edges, roadways, fencerows, and forest openings. It will take advantage of woodland areas that have been defoliated by insects or impacted by environmental or weather conditions.

The plant is dioecious, meaning that there are male trees and female trees. The females produce large quantities of seeds within papery containers called samaras; they have the potential to produce more than 300,000 seeds annually which are dispersed by the wind. Established trees send out suckers up to 50 feet in length to create seedlings, contributing to their dense thickets.

Tree-of-heaven has a number of distinguishing characteristics aside from the odor mentioned earlier. The leaves have a central stem with leaflets attached to each side, and can be up 1-4 feet in length. The leaflets are oval shaped with smooth edges, which helps distinguish them from native species with compound leaves and numerous leaflets. These species, such as black walnut and hickory, have leaflets with serrated edges. A young ailanthus has smooth, brownish-green bark, but a mature tree’s bark is light brown to gray and has wrinkles resembling a cantaloupe. See the image gallery below.

Controlling tree-of-heaven is particularly difficult once it becomes established. If you find one or more trees-of-heaven in your woodland, do not cut it down. Injured trees send out additional root suckers. Hand-pull young seedlings when the soil is moist and you can remove the entire root system. Even small root fragments are capable of creating new seedlings. Control of established trees can be accomplished year-round with a basal application of herbicide, and is particularly effective using herbicide during the end of the growing season (in Maryland, from late July to November). Because all the ailanthus trees in a thicket are connected via the root system, treating one will affect parts of the entire thicket. Herbicides applied to the foliage or directly into the tree through methods such as hack-and-squirt will be transmitted into the root network, thereby killing the targeted tree and reducing future sprouting. Repeated treatments will likely be needed for best results.

Samaras on a female tree-of-heaven in winter.

Tree-of-heaven seeds on a female tree.