Invasives in Your Woodland: Norway Maple 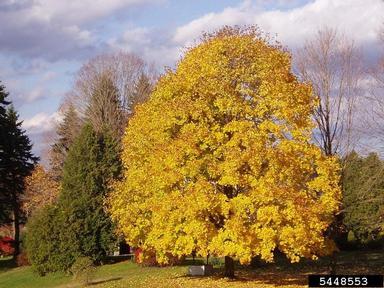 The Norway maple is so conspicuous throughout the United States that it is often easy to forget that it is an introduced species that can adversely affect the environment.

The Norway maple (Acer platanoides) is native to Europe. Its natural range stretches from western France in the east to central Russia in the west, and from southern Scandinavia to northern Turkey. It was first introduced to North America in 1756, when John Bartram of Philadelphia imported trees for sale as ornamental landscaping plants. It was planted on farms and in towns and became a popular choice for its hardiness, adaptability to harsh conditions, and its lush canopy and generous shade. It was also a popular choice in the mid-twentieth century to replace dying American Elm trees in cities and towns.

From there, it has spread throughout the northeastern US, from Maine to Wisconsin, south to Tennessee and Virginia, and to the Pacific Northwest. It has spread as reforestation occurred across the Northeast, and has also escaped from town plantings. See the distribution map below.

The Norway maple is a fast-growing deciduous tree that commonly grows to 40-50 feet in height, but may grow as tall as 100 feet. It tolerates a wide range of light conditions (from full sun to part shade) and soil types (growing in clays, loams, and sandy soils, tolerating both acidic and alkaline conditions). It also tolerates compacted soils and urban environments. It has a shallow root system, and its dense canopy suppresses growth of grasses and seedlings beneath it.

These characteristics have led New Hampshire and Massachusetts to ban Norway maples. Seventeen states, including Maryland, Virginia, West Virginia and Delaware, classify it as and invasive plant species.

Norway maple flowers early in the spring, before many native North American trees and shrubs, which may favor its ability to spread. It grows more quickly than the native sugar maple, and apparently reproduces more quickly as well. It produces large numbers of seeds that are dispersed by the wind. When seeds land in garden beds or other open areas, they germinate readily in the following spring.

Because Norway maples are so widespread throughout the northeastern US, they are often overlooked as a native species. Additionally, their leaf shape and branching pattern are very similar to native sugar and red maples. The fruits are also similar in appearance; the paired “samaras” have widely-spaced wings that spin and flutter in the wind when falling from the tree.

Seedlings can be pulled by hand and small to large trees can be cut to the ground. Repeat when necessary to control re-growth from sprouts.

A wide variety of resources exist about the Norway maple: