Invasives in Your Woodland: Multiflora Rose 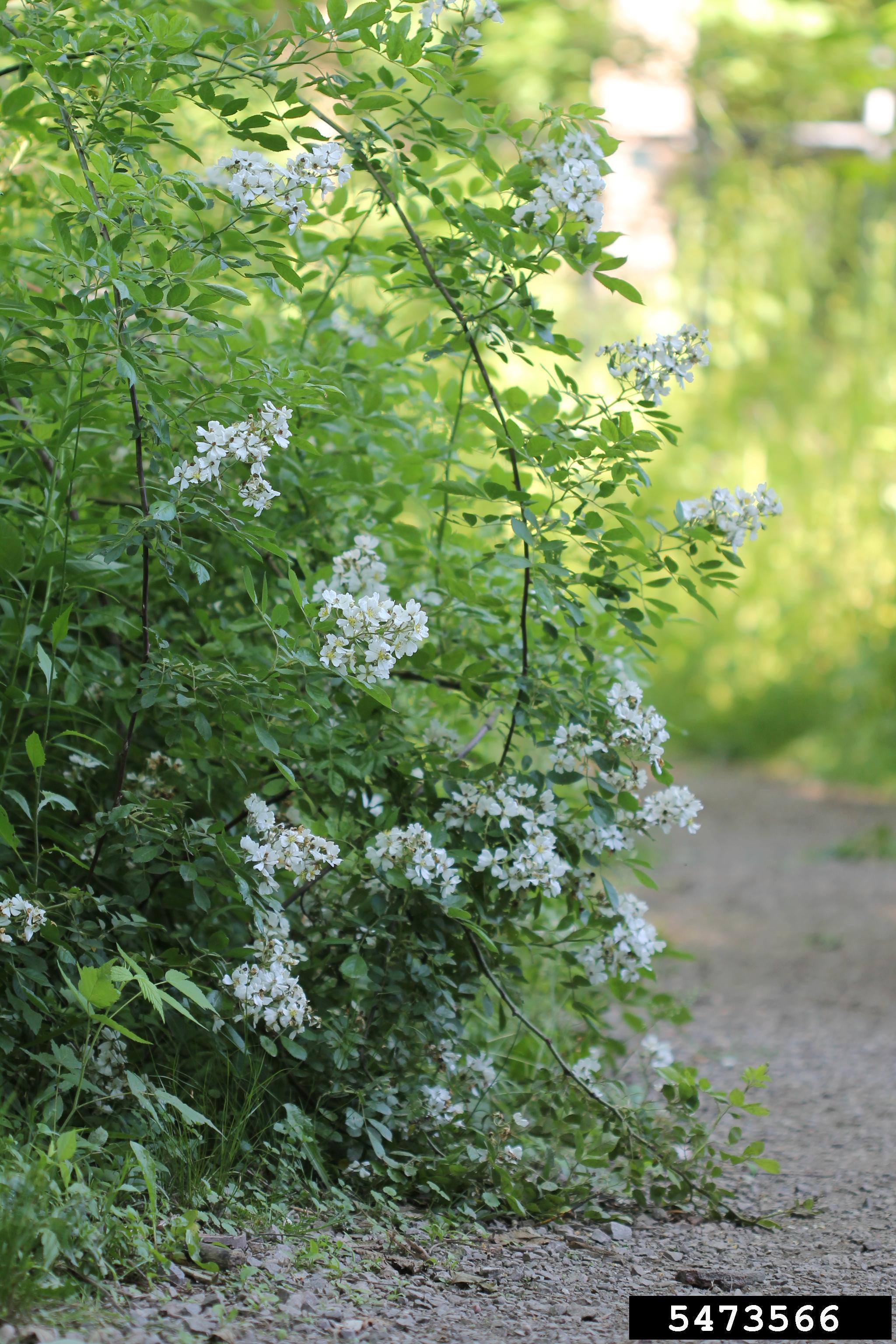 Multiflora rose is one of the most common invasive plants in the mid-Atlantic region. It is reported in all but three counties (Charles, Wicomico and Somerset) in Maryland; in all but nine counties and cities in Virginia; and all but four counties in Pennsylvania. It is reported in every county of West Virginia and Delaware. Farther afield, it is found as far north as Newfoundland and Nova Scotia, as far south as northern Florida, and as far west as Minnesota, Nebraska and Texas, with further concentrations on the west. See the distribution map below.

Multiflora rose (Rosa multiflora Thunb.) is native to eastern Asia, found in Japan, Korea and eastern China. It is a stout and thorny perennial bush that was brought to the eastern United States in 1866 as rootstock for ornamental roses, and was later promoted in the 1930s by the US Soil Conservation Service as a means of erosion control and as “living fences” in confining livestock. State conservation departments recommended using it as cover for wildlife; for example, in West Virginia, more than 14 million plants were planted in the 1940s to 1960s. More recently, it has been planted along highway medians to serve as crash barriers and to reduce automobile headlight glare. The plant was chosen because of its dense and rapid growth, creating dense thickets that crowd out native species. It also spreads into pastures and now infests more than 45 million acres throughout the eastern United States.

Multiflora rose spreads through its prolific seed production.  Each cane on a large plant may contain 40 to 50 clusters of flowers; each cluster may contain as many as 100 hips, and each hip averages seven seeds. Some researchers estimate that a single plant may produce a million seeds per year. The seeds remain viable in the soil for several years, and are often spread by birds, especially cedar waxwings and American robins and perhaps the Northern mockingbird, that eat the fruit and spread the seeds through their droppings. The plant also reproduces by rooting at the tips of its drooping canes.

Multiflora rose can be identified by its arching, thorny canes that can be green to red in color. The leaves are alternate with serrated, elliptical leaflets that are up to 1.5 inches long. The plant produces white, fragrant flowers during May and June, with red, spherical fruit appearing in late summer. Mature thickets may exceed ten feet in height and twenty feet in diameter. See the Image Gallery below.

Like many invasive plants, multiflora rose is difficult to control once it is established. A combination of manual, mechanical, and chemical strategies is often necessary. Removing new growth by hand is most effective when the plant is first found and before it can become established in the landscape. Repeated mowing, up to six times per growing season for two to four years, may control the spread of multiflora rose, although this may be a challenge when the plant is found in hilly terrain. Dealing with established infestations is difficult, especially when the plant has established thick hedges. One study examined the use of bulldozers on large thickets but counselled against it, because further control would be needed to combat re-sprouting and that seeds would readily germinate in the disturbed soil. The use of glyphosate has been effective on freshly-cut stems, new growth, and foliage. Application in the fall would result in control in spring of the next year. Other chemicals, such as dicamba, triclopyr, and fosamine have shown results as well. Always check warning and safety labelling information before using herbicides.

Shrubs and Subshrubs: Multiflora rose (US Dept. of the Interior National Park Service)