Invasives in Your Woodland - Mile-a-minute 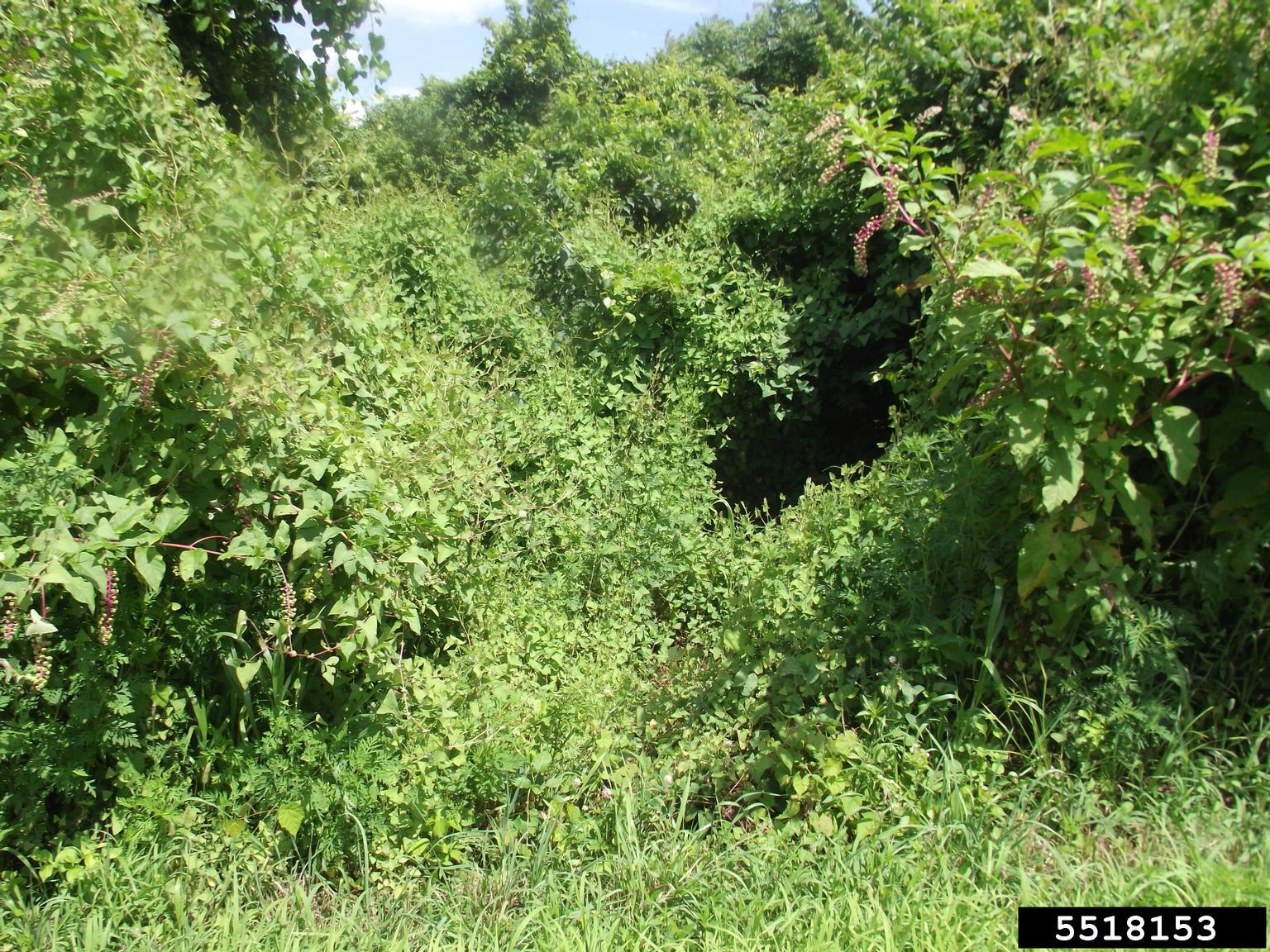 With a name like “mile-a-minute,” one might assume that this invasive vine grows quickly. It does. It may not actually grow a mile a minute (60 mph), but experts say that it can grow up to six inches a day, and can climb up to 25 feet in a single growing season. That is a significant amount by any standard.

It is also known as “Asiatic tearthumb” or “the devil’s tearthumb,” due to its numerous sharp, downward curving spines on the stem. No matter what it is called, it is a vigorous invasive that may only have just begun to spread in the United States. One estimate surmises that it is only found in 20% of its potential range in this country. See the distribution map below.

Mile-a-minute (Persicaria perfoliata) is native to India and eastern Asia. Although the first recorded specimen of this member of the buckwheat family arrived in the US in the 1890s near Portland, OR, it did not become established. However, it apparently arrived on the east coast in the 1930s as a contaminant of nursery stock. In 1989, it was only reported in three states, Pennsylvania, Maryland, and West Virginia. Five later that number had grown to eight, and by the early 21st century, was found as far north as New Hampshire, and in isolated areas as far west as Iowa and as far south as North Carolina.

The vine is an annual plant that colonizes a variety of environments in the mid-Atlantic states. It prefers high moisture sites and requires regular sunlight to thrive. It grows along roadsides, river and stream banks, rights-of-way, and disturbed forest sites. It forms dense canopies, smothering native vegetation attempting to regenerate. It climbs into tree canopies and restricts light to plants growing below.

Mile-a-minute spreads both through its rapid growth and through seed dispersal. Seed germination begins as early as mid-March and continues through April. Flowering begins in early June and the seeds are ripe by July, continuing until the first frost. Birds and other wildlife eat the fruit and spread the seeds through their droppings. Unsuspecting humans and domestic animals may also spread the seeds from clothing, footwear, equipment, or fur. The seeds are buoyant for up to nine days, allowing them to be spread by flowing or flooding streams and rivers. Once in the soil, the seeds are viable for up to 6 years.

One of the most distinctive features of mile-a-minute is its triangular leaves. They are light green in color, about three inches wide, and barbed on the underside. Round, leaf-like structures surround the stem, from which the small flowers and fruit grow. The green fruit turn metallic blue as the season goes on. See the photo gallery on the next page.

As with many invasive plants, the easiest way to control mile-a-minute is to prevent any individual plants from growing and an infestation from forming. Individual plants can be removed via hand-pulling, mowing, or cultivating. Hand-pulling is actually relatively easy, as the roots are shallow, but gloves must be worn to avoid the barbs and spines. Once pulled, the plant will not re-sprout.

Larger infestations will require chemical control. Several herbicides that are labelled for forestry applications have proven effective in combatting mile-a-minute. These include triclopyr, glyphosate, and hexazinone. Regardless of which method is used, it is important to remove the plants before the fruits begin to ripen in mid-July to prevent further spread.