Invasives in Your Woodland: Lesser Celandine 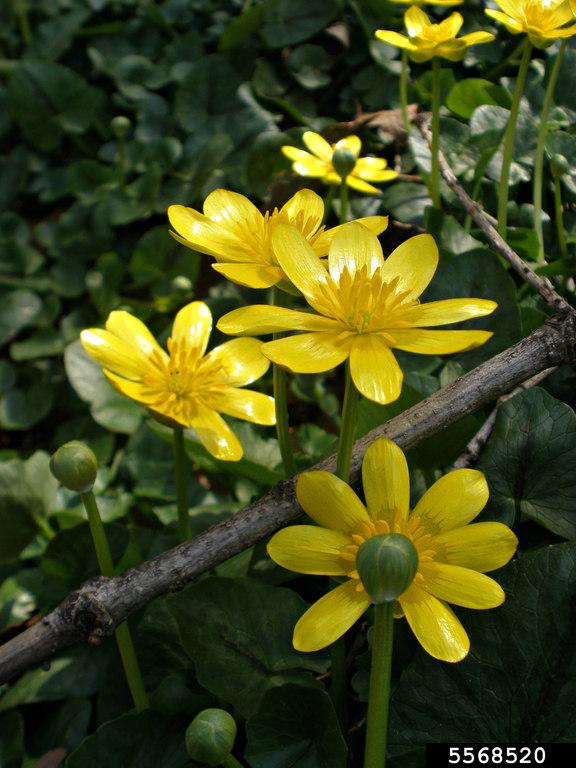 Lesser celandine may not rank with other invasive woodland plant species such as Japanese stiltgrass or mile-a-minute, but it can be an ecological threat like any of the others. As is the case with many other now-invasive species, the plant was introduced to the United States as an ornamental plant in the late 1800s, from its natural range of Europe, Asia, and parts of northern Africa. Although its sale was banned in Maryland in 2017, it may still be available for sale in other states. Currently, it is found in nineteen states, primarily east of the Mississippi River, although it is also found in the Pacific Northwest as well. In our region, it is found in eastern and southwestern Pennsylvania, isolated areas of northern and central Virginia, and seven counties in central Maryland and Washington County. See the distribution map below. 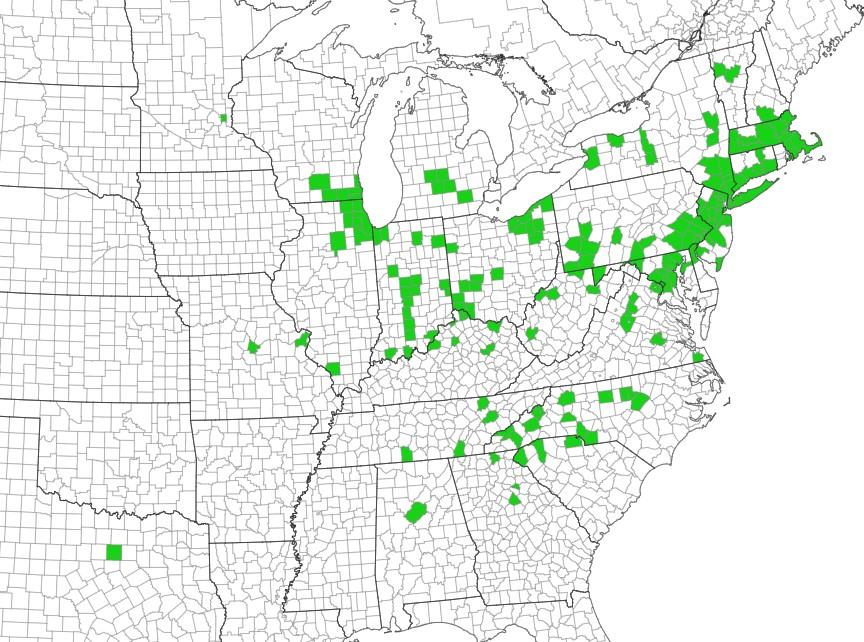 Lesser celandine (Ficaria verna), also known as fig buttercup, is a “spring ephemeral” plant, which means it is easiest to find in our area in early spring when its bright yellow flowers are most prevalent. Its active growing and flowering season begins as temperatures climb above 40 degrees, as early as February. This gives the invasive an advantage over native ephemerals such as mayapple or Dutchman’s breeches that are still mostly dormant in those temperatures. As area trees begin to leaf out and shade the forest floor, lesser celandine becomes dormant.

It prefers forested floodplains and sandy soils, but can also be found in some drier upland areas.

Lesser celandine spends most of the year underground, from summer to early winter, as thickened, tubers that resemble figs (hence its alternative name). After flowering, the plants die back above ground, and spreads underground via the tubers. It can also spread through aboveground features called bulbils that sit in the base of the mature plants. They are easily caught in deer hooves; deer are thought to be a significant contributor to the spread of lesser celandine, as infestations often appear on or along deer trails.

Lesser celandine’s shiny, dark green leaves are heart- to kidney-shaped; marsh marigold’s are also dark green, but are much larger. Additionally, marsh marigolds do not have the fig-shaped tubers underground or the aboveground bulbils. When in bloom, lesser celandine infestations can resemble thick carpets of green with yellow spots. A final distinguishing characteristic is the habitat; as its name implies, marsh marigolds are seldom found outside of wet environments. See the image gallery below.

Once lesser celandine is established, it is extremely difficult to manage, much less eliminate. It can take over forest floors, woodland stream banks, as well as work its way into turf grass environments.

Once an infestation is found, management is rarely effective except during the growing period. Small colonies can be removed through digging as long as care is taken to remove all the underground materials of roots and tubers, from which new growth can occur. Repeated treatment will likely be necessary, and care must be taken to ensure the plant doesn’t return from any outside sources. Mowing, especially in turf grass environments, has little impact, as it does not control the underground tubers. At this time, the best method of control is applying herbicides. Treating turf grass with dicamba, triclopyr, or sulfentrazone products work best. Treating lesser celandine infestations in woodland areas with herbicides have been successful with repeated annual applications.Spraying with glyphosate seems to offer the best control. Ensure that a glyphosate product labeled for wet areas is used if treating lesser celandine near water.