Invasives in Your Woodland: Japanese Barberry 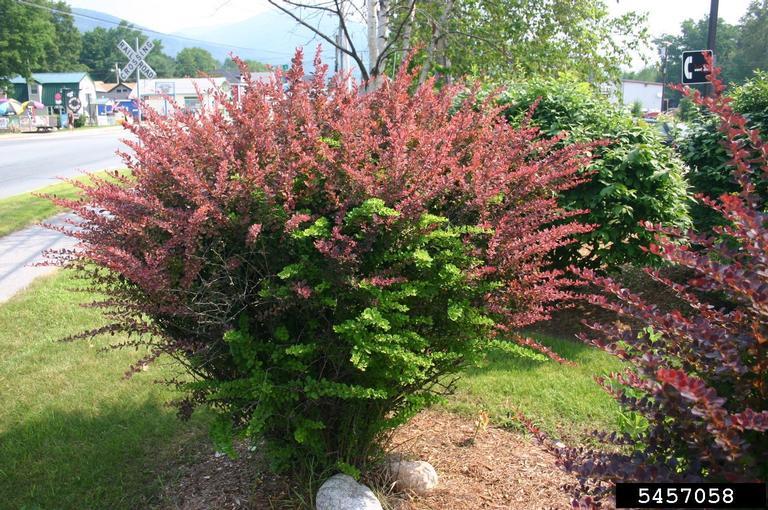 Japanese barberry has been in the news recently, due in part to a multi-year study in Connecticut that is examining the relationship between white-footed mice, blacklegged ticks, and Japanese barberry. The initial results should give landowners pause about having this ornamental shrub as plantings around the house and as invaders in their woodlands.

Japanese barberry (Berberis thunbergii) was introduced from Japan as an ornamental in the late 19th century. In the hundred-plus years since, it has been chosen by many landscapers because it does well in a variety of habitats. It tolerates shade, resists drought, and deer don’t eat it. While this sounds like a perfect combination for ornamental planting, because deer do not browse it, it can outcompete native shrubs. It spreads rapidly through woodlands, open fields, and wetlands, and is now found in 31 states. See the distribution map below.

Its umbrella-like foliage forms dense cover, creating perfect cover for mice and ticks. Researchers have discovered that humidity conditions beneath Japanese barberry are more conducive to tick activity than native shrubs, allowing the insects to be active up to 23 hours a day. According to Scott Williams, adjunct professor at the University of Connecticut Extension’s Department of Natural Resources and the Environment, “When we measure the presence of ticks carrying the Lyme spirochete we find 120 infected ticks where Barberry is not contained, 40 ticks per acre where Barberry is contained, and only 10 infected ticks where there is no Barberry.”

As with many invasive plants, Japanese barberry is spread by birds that consume the berries and then excrete the seeds. Berries are also spread by hikers who pick them up in their boot treads. Additionally, it spreads by shoots below ground and by the tips of its branches, which will root freely when they touch the ground.

Japanese barberry is a small shrub that grows 2-8 feet in height, with thin, grooved branches with thin, straight spines, and that forms dense thickets that crowd out native plants. The leaves are up to 1 inch long and paddle-shaped. Its pale yellow flowers occur in drooping clusters of 2 to 5 and develop in mid-spring to early summer.

Like many non-native plants, it leafs out early and retains its leaves into late fall. This can help you identify the infestation in your woodland. Some control efforts can even be performed in the mid-Atlantic states during winter, as long as the ground is not frozen.

Seedlings can be pulled out manually because of the shallow root system. Do so when the soil is moist. Larger plants can be removed with a spade. Mowing can be used as a first step, because the plant will re-sprout if not removed after cutting.

Herbicides have been shown to be effective when applied as basal bark or cut stump application. The USDA Forest Service suggests that chemicals are an option only when plants are difficult to remove mechanically.

Controlled burning has also shown to be effective where they have invaded fire-resistant environments. In other habitats, burning is not recommended.