Invasives in Your Woodland: Callery Pear 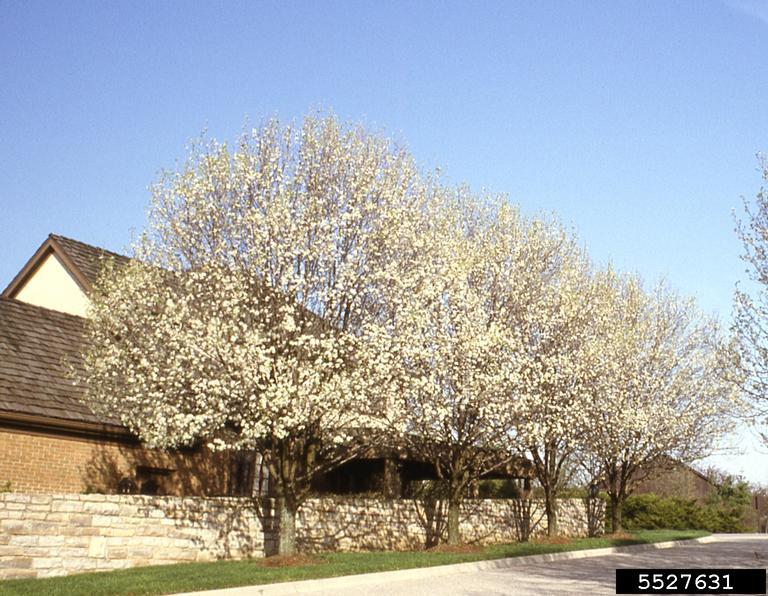 Drive along many of Maryland’s major roads in the spring, and you will see what seems like a wall of white, as the Callery pear (and its offshoot, the Bradford pear) are in bloom. While these may be an impressive sight, these trees are an invasive and highly competitive species.

The Callery pear was first brought to the United States in 1918 from its native China. At the time, America’s native Bartlett pear trees were threatened by fire blight, and USDA researchers hoped that cross-breeding Callerys with Bartletts would make for a blight-resistant tree.

The resulting trees were studied for thirty years at a USDA facility in Maryland before the project was abandoned without any significant success. However, a few of the trees seemed to have potential as ornamental plantings, and were discovered to be sterile hybrids that would not crossbreed among themselves. These new trees were named for F. W. Bradford, a respected (and retired) scientist who had had nothing to do with the project.

The new hybrids were introduced to the public in the 1960s, but since then, research has discovered that Bradfords are not sterile. They crossbreed indiscriminately with all other pears in the environment. The resulting offspring have reverted to the original Callery pear and have spread across the landscape. Consequently, they are found in great numbers in Maryland, Virginia, and southeastern Pennsylvania, as well as in many other states from New Jersey to Texas. See the distribution map below.

Callery pears today are most commonly spread by wildlife. Birds and other animals eat and spread the seeds through droppings. These seedlings form dense thickets that push out native plants, growing rapidly in disturbed areas such as fallow fields and roadsides.

The Callery pear has a distinctive V-crotch branch structure. See the Image Gallery below.

If you have Callery pears on your property, take care to note the small fruit it will bear. If possible, remove the fruit before it is eaten by wildlife. Cutting the trees will provide good firewood; however, it is important to ensure that they do not re-sprout. Trunks can be treated with herbicides in several methods, including hack n’ squirt, basal bark and cut stump, with triclopyr or glyphosate.

Seedlings and shallow-rooted plants can be pulled when the soil is moist. Take care to remove the entire root system to prevent re-sprouting.

When the invasives have been removed, replant the area with native species, such as common serviceberry, Allegheny serviceberry, or white fringetree.