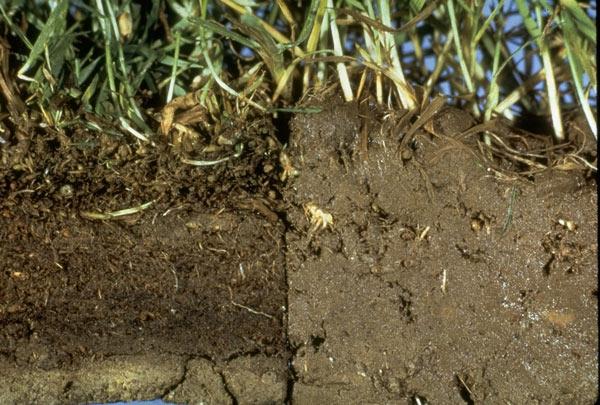 Thatch is the intermingled layer of living and dead stems, leaves, and roots that exist between the soil and green vegetation. A thin thatch layer (¼-½ inch) provides some benefits such as surface cushioning, increased wear tolerance, and temperature moderation. Excessive thatch (1 inch or more) can cause a variety of lawn problems. Fescues and perennial ryegrass produce thatch slowly but zoysia, Bermuda, and bluegrass tend to be heavy thatch producers.

A vertical mower (cuts down through the thatch layer with rows of teeth) or core aerator can mechanically remove thatch. As with aerating, a good time to dethatch is when the grass is growing vigorously and will have time to recover. Another way to decrease the thatch level is to make the soil more hospitable to microorganisms that decompose organic debris. This can be done by adding lime if the soil is too acidic, encouraging earthworm activity, and aerating the soil. Be aware that many insecticides and fungicides are lethal to earthworms. Improper cultural practices such as light, frequent watering, and over-fertilizing can increase the rate of thatch buildup.