The Asian longhorned tick (Haemaphysalis longicornis), also known as the longhorned tick, cattle tick, and the bush tick, is native to East Asian and was discovered in the United States in 2017. However, it likely has been present in the United States since 2013. It is currently found in nine states: Maryland, New Jersey, Virginia, West Virginia, North Carolina, Pennsylvania, New York, Arkansas, and Connecticut.

Longhorn ticks are more commonly found in tall grass and pasture environments more so than forest environments. While they prefer to feed on wildlife and livestock, longhorned ticks will feed on pets and humans as well.

Adult Asian longhorned ticks are reddish-brown and approximately 0.1 inches (2.5 mm) long. When fully engorged, they are about the size of a pea. Unlike native species of ticks, they do not have any markings or distinct coloration. 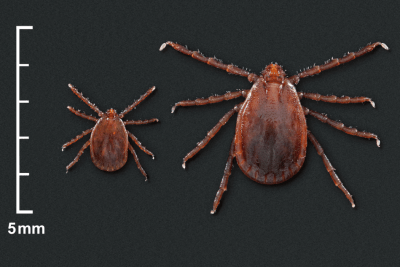 Asian longhorned tick nymph on the left, and an adult female on the right. Photo: James Gathany, CDC.gov

The Asian longhorned ticks have three life stages — a six-legged larva stage, an eight-legged nymph stage, and an adult stage. It will have one blood mealing during each life stage. Following the meal, it will fall off of its host, molt, and then starting searching for a new host. 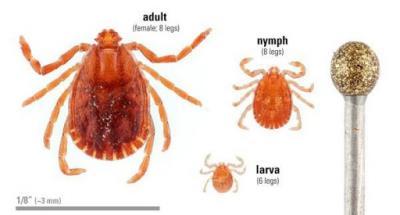 Unlike our native tick species, female longhorn ticks can reproduce and lay eggs without mating, a process called parthenogenesis. Males are rare. Female longhorned ticks can lay up to 2,500 eggs in the late spring to early summer. Their eggs hatch in late summer to early fall. The larva will take a blood meal before molting into nymphs, which will overwinter in leaf litter and will start searching for a host in the spring.

Ticks do not fly or jump. They find a host by "questing," or waiting on the tips of grasses or leaves and holding their first pair of legs outstretched. When a host brushes them, they quickly climb aboard. Longhorned tick larva have been observed questing as a group of 50-100 on a single grass blade.

In Asia, the longhorned ticks have been known to carry infectious parasites and bacteria to both humans and animals. They can transmit bovine theileriosis and babesiosis to livestock. These diseases can lead to decreased milk production in cows and a decrease in wool quantity and quality in sheep, as well as animal death. Asian longhorned ticks are vectors for several human pathogen diseases in their native range, but it is unknown if they can transmit North American pathogens yet.

You can reduce tick bites by wearing clothing treated with permethrin, and using DEET on open skin. Always read and follow the label directions when using pesticides and repellents. When in a possible tick-dense environment, wear closed-toed shoes and tuck your pants into your socks and your shirt into your pants. This will increase the distance a tick must crawl before it can find open skin, which increases the likelyhood of it falling off. Speak with your veterinarian about tick control for your pets.

If you find a tick feeding on yourself, a loved one, or a pet, the best way to remove it is to use a pair of fine-tipped tweezers to grasp the tick as close to the body as possible. Then pull the tick away in a straight upward motion.

What you need to know about Asian longhorned ticks | CDC.gov